Will Microsoft’s Courier Deliver the Goods?

You didn’t even have to open up your notebook computer Wednesday to hear the alarms and klaxons going off in the technology blogosphere: Someone had leaked images and video of a dual-screen, multi-touch tablet PC that’s supposedly in the “late prototype” stages at Microsoft. 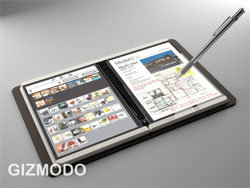 Gizmodo is the lucky recipient of the information regarding the Courier, said to be an actual device that looks more like a slim e-reader or portfolio than a tablet computer. The two 7-inch screens face each other book-style, and users can interact with them with a stylus or with their fingers. They can also use the by-now-familiar “flicking” gestures to scroll up and down a page. There’s wireless connectivity, a camera — and plenty of comparisons to other Microsoft products like the Surface table computer and the new Zune HD handheld media player.

Microsoft did not respond to a TechNewsWorld request for comment. The Courier news would clearly fall into the “rumors and speculation” category that major tech companies like to avoid, even though leaks have become standard operating procedure with the rise of tech blogs. Also, as Gizmodo points out, the Courier video appears to be from Pioneer Studios, a division within Microsoft Entertainment and Devices, the same people who give you Xbox 360 and Zune.

So the speculation steeplechase was off and running with the Courier — along with plenty of talk about what Microsoft’s research work would mean to another technology giant supposedly preparing to drop its version of a tablet computer on the world: Apple.

Two analysts contacted for comment on the Courier by TechNewsWorld are in the middle of sessions and demonstrations at this week’s Intel Developer’s Forum in San Francisco, where the world’s top microprocessor company gives its annual progress report on the future of computing and unveils potential form factors for devices.

Ultra-mobility has been the operative word at IDF this year, said Ben Bajarin, director of Creative Strategies’ consumer technology practice, and the Courier certainly fits that model even as many would wonder about battery life for the product. “They’re showing very small devices capable of very fast and rich user experiences — some barely bigger than the iPhone,” Bajarin told TechNewsWorld. The processing technologies Intel is promising for this new category of devices “have more power and more battery efficiency for more smaller devices with chips running Intel architectures.”

It’s not a hardware obstacle, but a software issue that Bajarin hopes Microsoft will conquer with the Courier.

“We’re seeing more all-in-one desktop PCs and a shot of different vendors this fall, all with touchscreens,” he added. “If you use them for five minutes, you know that even though Windows 7 uses touch, there’s not a lot of touch-centric experiences. The software is still written with the keyboard and mouse in mind.

“What needs to happen is to eliminate the keyboard and mouse and then rethink the software,” Bajarin said. “Apple has both — an entire experience geared for touch (iPhone, iPod touch) and one that works very well with mouse and keyboard. Microsoft doesn’t have that, and a lot of other vendors don’t have that type of solution. This (Courier) addresses a fundamental problem with the Windows ecosystem.”

Thanks to its Surface research, Microsoft has done the software leg work required to bring the Courier to market this year if it wanted to, according to Enderle Group president and principal analyst Rob Enderle. The technological hurdle would lie with multi-touch screen developers and other hardware companies.

Then there’s the user experience issue. “This is Microsoft. It’s offering everything and the kitchen sink at first, and that scares away buyers,” Enderle told TechNewsWorld. “This kind of takes the Daytimer (leather-covered planner/organizer) concept and takes it into the future. No device has done this successfully yet. This could be a likely future, but the question is, can you do it as aggressively as this does at first, or do you add these features over time and ease people into them? You give people a lot of complexity all at once, and they find it daunting.

“The very people that Microsoft would want to be early adopters for this, the people living off Daytimers and portfolios, would be the ones most frightened by it. It’s too much too fast,” Enderle said.

An applications store that would help users gradually discover new experiences might help, he added.

The price point is an obvious sticking point, and Enderle believes if Microsoft were to introduce this product today, it would run between US$1,000 and $1,500. “You would want them to come around $400 to $500. The parts are a little pricey right now.” However, with more multi-touch monitors and PCs heading to market soon, more hardware might mean cheaper prices in a year or two, Enderle said.