This is an Apple launch week, which means we’ll be on pins and needles until we actually know what Steve Jobs is going to have on stage in San Francisco.

While there is a lot of drama with any big Apple announcement, there is substantially more with this one, including the unprecedented number of leaks, the location of the event itself, and the massive devastating impact this device could have on PCs, game consoles, e-readers — and even Apple.

I’ll address each of these in turn and close with my product of the week: an update to my favorite Bluetooth headset that can be used for both cellphone and Skype calls.

Typically, with any Apple launch, there is a problem — which is half the fun — of figuring out the details of what is being launched. I was at an Intel analyst event last week, and the group discussion was on the unusual nature of this launch. Instead of a lack of information, we have way too much, and a lot of it is conflicting.

It seems as though every Asian company that either is or wants to be an Apple partner is finding someone to talk to about this device, and we are awash with sourced statements on everything from names, to screen types, to sizes, to price, to capabilities. We are pretty sure the interface will be pure iPhone however.

This has led to an impressive amount of confusion over all aspects of this product as highlighted by this somewhat humorous PC World article.

In terms of secrecy, this is the Bizarro of Apple launches, making me wonder if there is a Steve Jobs clone running Apple and whether instead of being a copy, he’s a mirror image. I’ll guess we’ll know when he presents the product wearing white.

Typically, for a major product like the iPod, the introduction is on Apple’s campus or at an Apple event of some type. When it launches away from either, as it is doing with this slate device, it is as if it wants to distance itself from the offering and signal that it isn’t that important. This launch is at the Yerba Buena facility off Mission Street in San Francisco.

This would suggest that — like the Apple TV — this is a product the company isn’t that sure of; yet it probably is the most high-profile product it has attempted since the Mac, making even the location a contradiction.

Setting aside all the controversy, this is a big and risky move for Apple — and the entire tech and consumer electronics industry. At one extreme, it could begin a process that obsoletes exiting PCs, e-readers, and game systems as we know them, impacting both areas where Apple doesn’t compete and areas where it does.

At the other end, it is a too-early misfire by the company, starting a trend that the firm isn’t in a position to capitalize on, one that is closer to Google’s core competency.

The result will likely fall in the middle.

There’s been a movement away from desktop PCs for some time. E-readers have bounced in education and are too expensive for just text reading, and the lack of a major timely refresh on the game consoles largely made them poor performers this last holiday season.

While you might argue this could actually be a boon for desktop PCs — particularly all-in-one designs that could grow to have a better symbiotic relationship with the iSlate than laptops currently have with desktop computers — a larger device could potentially capture much of what most of us currently use laptop PCs for (email, light document creation, full-screen browsing), e-readers (reading books and newspapers), and console/handheld gaming (better handheld/console blend, particularly with a TV dock).

This takes the capabilities of a US$300 e-reader, a $400 netbook/smartbook, and a $200 game system and creates a single product more capable than most of these that costs less than all of them together (hopefully) and potentially fulfills the same needs. Now that would be an incredibly attractive and disruptive product.

There is no doubt this product is already creating a massive rush to this massive potential opportunity. The Consumer Electronics Show, CES, was awash with tablet-like products promising similar capabilities, but as yet lacking the kind of packaged service and marketing that Apple is capable of.

However, the dominant vendor on everything else was Google, and it is the preeminent public cloud vendor that should actually have a significant advantage as this market matures.

Google is also a multivendor multiplatform (with Chrome OS) provider that is already very aggressive with both book access, via its global indexing effort, and video (YouTube), and it has a full suite of online applications targeted at displacing PCs.

On this last, it will have no cannibalization concerns about its product, while Apple is likely to cripple its iSlate initially to protect its Macs.

This has the potential of recreating the initial Apple/Microsoft battle but with Google in Microsoft’s role and ending with the same result.

This may be the most revolutionary product since the Apple II. The only question is whether Apple will emerge this time as the primary beneficiary or be bypassed by another firm (Google) that has better leverage and can move more broadly.

Last time, Steve Jobs was at the beginning of his career — this time at the end. It is clear he has learned a lot in the middle; we’ll know shortly if he learned the right things.

As someone in his age group, I’m rooting for him this round. I should point out that since display technology, content licensing, and WAN pricing aren’t where they need to be to make this product what it could become, I am expecting it to improve dramatically from the first to third versions.

Last year, I ended the year with one favorite cellphone headset: the Plantronics Voyager Pro.

However, when I’m traveling, I often have to switch between cellphone and Skype calls, which means I look like some reject from a geek convention with a PC headset half on my head and the headset still in my ear.

Plantronics sent me an update with the Voyager Pro UC, which has a Bluetooth dongle that plugs into my laptop giving me the capability of using the one headset to do both and allowing me to maintain a significantly less dorky image. (The UC stands for “unified communications.”) 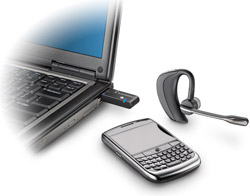 The headset is the same bidirectional noise canceling marvel (both cleaning up outbound and inbound voice streams) and it has the same massive long-lasting battery.

Granted, if the iSlate is as successful as it could be, we may not need the USB dongle that much longer — but while we do, the Plantronics Voyager Pro UC is a natural for my product of the week.