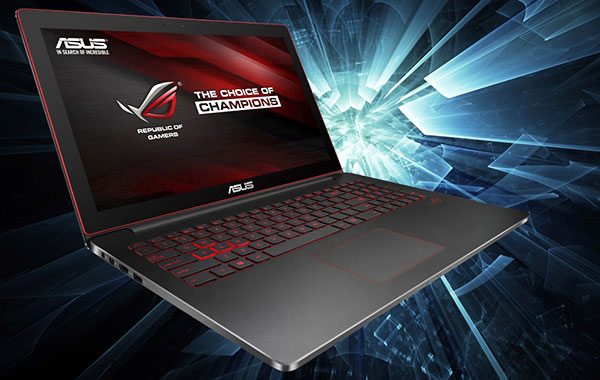 Nvidia on Thursday launched the latest in its GTX 900s series of mobile GPUs — GTX 960m and 950m — designed to make a gaming laptop as future-proof as possible. Asus’ recently unveiled GX501 is one of the machines that already has incorporated the latest Nvidia tech.

Though it isn’t ready to disclose the GX501’s full specs just yet, what Asus has revealed suggests the GTX 960m card will be surrounded with worthy hardware.

The GX501 will have the option of a 4K display, with a resolution of 3840 x 2160, or standard HD. Asus also has improved the gaming laptop’s cooling system for stealthier performance.

Asus apparently kept a watchful eye on the processor competition before solidifying its plans for the GX501.

Intel recently announced its long-awaited Broadwell chips, but they are in their “tick” phase and haven’t hit their powerful “tock” just yet.

Also passed over was AMD, which has struggled to compete with both Nvidia and Intel in the GPU wars. Still, the red team isn’t out of the game yet, according to Ted Pollack, senior gaming analyst at Jon Peddie Research.

“AMD is not giving up that I know of,” Pollack told TechNewsWorld. “The price to performance trade-off in some AMD machines presents a compelling option for some consumers.”

Despite AMD’s persistence and its loyal following, besting Nvidia has become more of challenge as it has deepened its push into tablets and laptops.

Despite the rise of mobile gaming machines, tablets and smartphones, laptops in general are thriving, according to Mike Schramm, manager of qualitative insights at EEDAR.

Gamers are willing to buy high-end laptops to play AAA titles — big budget games — but they view it as a separate experience from mobile gaming, Schramm pointed out.

“It’s not a 1:1 comparison, in other words,” he said. “Players will enjoy Monument Valley on a tablet, but then go and play League of Legends on their laptop as well.”

There’s always going to be a market for PCs and laptops, thanks to gaming and productivity, said Tim Coulling, senior analyst at Canalys. Times are changing, though, which is why hardware manufacturers are leaning on gaming.

“When you look at the total market, you’ve got [average sales prices] declining quite rapidly at the low end,” he told TechNewsWorld. “So it’s very difficult for the likes of Asus or any of the other vendors to make money in the wider notebook and desktop market.”

While the money may be fading at the lower end, PCs will continue to have a place in homes indefinitely, according to Coulling.

“Some things require a bit more heavy lifting — things that you can’t do on a tablet or a smartphone — even basic spreadsheets,” he observed. “People always go to a PC to do that, because you have the keyboard and mouse. It’s a bit easier to use that instead of a touchscreen.”