When so-called “minicomputers” first appeared in the 1970s, they supplanted mainframes on a scale of size and cost expressed by Bell’s Law, which holds that a new class of smaller, cheaper computers comes along roughly every 10 years. 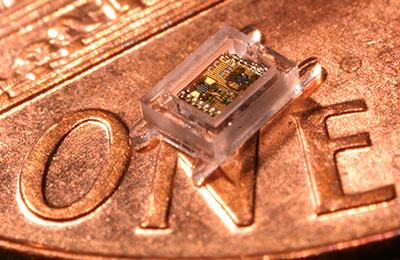 University of Michigan researchers developed what is believed to be the first complete millimeter-scale computing system.(Credit: Gyouho Kim)

Designed for surgical implantation in glaucoma patients, the monitor is a University of Michigan Department of Electrical Engineering and Computer Science prototype created by professors Dennis Sylvester, David Blaauw, and David Wentzloff.

Considered a corollary of Moore’s Law, which states “the number of transistors per chip will double every 24 months,” Bell’s Law leaps from transistors on chips to computers, describing not how their components increase, but rather how they shrink.

One notch further along the Bell’s Law curve, nearly-invisible millimeter-scale computer systems “could enable ubiquitous computing,” monitoring virtually everything around us, Sylvester explained.

“When you get smaller than hand-held devices, you turn to monitoring devices,” Blaauw told TechNewsWorld.

Given the money they can generate, medical applications are a predictable start for milli-computers. The computerized pressure monitor continuously tracks glaucoma, a disease that can blind as its pressure on the eyes increases. It can store up to a week’s worth of information.

At just over one cubic millimeter, the monitor includes an ultra low-power microprocessor, pressure sensor, memory, thin-film battery, solar cell, and a wireless radio with an antenna that can transmit data to an external reader device held near the eye.

“Our work is unique in the sense that we’re thinking about complete systems in which all the components are low-power and fit on the chip,” Sylvester told TechNewsWorld. “We can collect data, store it, and transmit it. The applications for systems of this size are endless.”

The system’s wireless radio doesn’t need the typical bulky external crystal that selects a radio frequency band. Integrating the antenna through an advanced CMOS process eliminated the crystal and shrunk the radio system to less than 1 cubic millimeter.

“This is the first integrated antenna that also serves as its own reference,” Wentzloff told TechNewsWorld. “The radio on our chip doesn’t need external tuning. Once you deploy a network of these, they’ll automatically align at the same frequency.”

The novel reworking also added better controllability. Manufacturers will be able to control the antenna’s shape, size, and how it oscillates in response to electrical signals.

The UM researchers are presently working to lower the radio’s power consumption so that it’s compatible with millimeter-scale batteries.

Power consumption is issue one if researchers are to meet what Blaauw calls “the next big challenge: to achieve millimeter-scale systems, which have a host of new applications for monitoring our bodies, our environment, and our buildings.”

The researchers invented a processor they call the “Phoenix chip,” which uses a unique power gating architecture and an extreme sleep mode to achieve ultra-low power consumption.

Now in its third generation, the Phoenix wakes every 15 minutes to take measurements, consuming an average of 5.3 nanowatts, or 5.3 billionths of a watt. Ten hours of indoor light or 1.5 hours of sunlight each day keep the battery charged.

“His vision of having tiny millimeter and micrometer-scale computer elements all around us that would monitor light, temperature, pollutants and other environmental factors was designed to improve quality of life,” Sylvester explained. “But when Pister first suggested the idea in 2001, there really wasn’t a way to scale down computer systems because power consumption couldn’t be scaled down. Power systems don’t follow Bell’s Law.”

Today, the glaucoma monitor’s Phoenix chipand battery setup “is an example of the tip of the iceberg in power system improvements,” Sylvester said. “We’re using a lithium thin-film battery custom-made by Cymbet augmented by tiny solar cells that use light power to recharge the batteries.”

It’s a setup Sylvester calls “energy autonomous” that focuses on design. “If we want to make things smaller and better, we need to continually improve not only technology, but also design.”