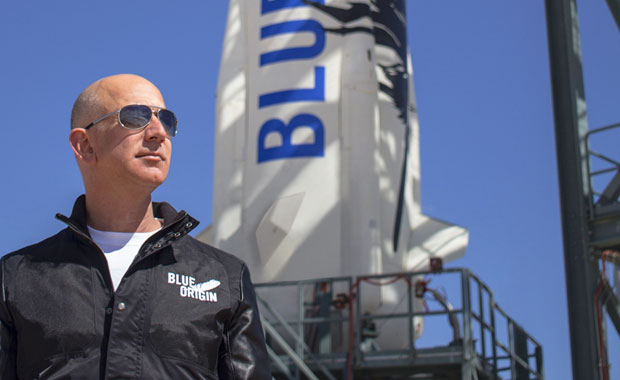 Bezos released illustrations of two models, the New Glenn 2 and the larger New Glenn 3. They’re larger than all other rockets except the Saturn V, which NASA used for the Apollo program to send astronauts to the moon and other missions. 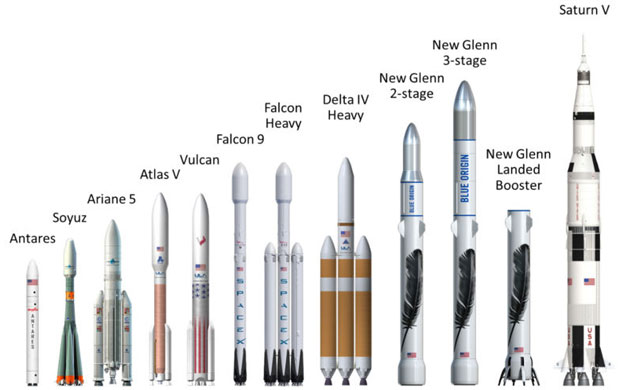 “The New Glenn 2-stage would be Blue Origin’s foray into the satellite launch market,” noted Jekan Thangavelautham, head of SpaceTREx (space and terrestrial robotic exploration) at Arizona State University. It “will be able to put large satellites in [low Earth orbit] and smaller satellites — sub-50 to 100 kg — in higher orbits.”

The 3-stage heavy lift rocket “should be able to put large satellites in [geostationary orbit] or send them on interplanetary journeys,” he told TechNewsWorld.

First, however, the 3-stage New Glenn “needs to prove the upper stage hydrogen-oxygen cryo engine,” he pointed out. “That is not an easy accomplishment.”

Both the New Glenn 2-stage and New Glenn 3-stage are 23 feet in diameter. The 2-stage is designed to stand 270 feet tall while the 3-stage rocket will be 313 feet tall.

The booster and the second stage are identical in both, and the booster will be reusable.

The first stage will be powered by seven Blue Origin BE-4 engines delivering 3.85 million pounds of thrust. The BE-4 is a single-shaft staged combustion engine running on liquefied natural gas and liquid oxygen.

The New Glenn 3-stage rocket will be able to fly beyond LEO.

It’s expected to launch from Cape Canaveral’s LC-36 complex by the end of the decade.

The New Glenn 2 “is roughly the size of the Saturn V, but its payload will be less since it’s using engines and fuel with a lower specific impulse,” observed Michael Jude, a program manager at Stratecast/Frost & Sullivan.

Private enterprise increasingly is demonstrating an interest in interplanetary space, especially asteroid mining, Jude said. The New Glenn 2-stage “would seem to be capable of addressing that market.”

Further, “several companies are looking to place larger structures into LEO,” he pointed out, and “this booster would be ideal for that mission.”

SpaceX, the leading competitor, has won a NASA contract to ferry supplies to the International Space Station, but it has been slowed down by recent accidents. An explosion earlier this month destroyed another Falcon 9 rocket, along with its Amos-6 commercial satellite payload, on the launchpad at Cape Canaveral, reportedly during a static-fire engine test. A Falcon 9 rocket earlier this year crashed into an ocean barge during landing.

“Blue Origin with the New Glenns could go after the same market [as SpaceX] and the satellite launch market as well,” SpaceTREx’s Thangavelautham suggested. “With the anticipated growth, there will be room for more players.” The defense industry is another option.

Competition “will do what government couldn’t do: drive down the cost to launch payloads,” Frost’s Jude said.

“There’s definitely a race to achieve space tourism,” Thangavelautham remarked. However, “the first to reach the market is not always the clear winner in the aerospace industry. We’ve had lots of failures in the past.”