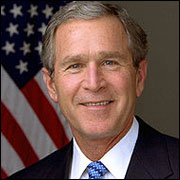 It would be natural to assume that George W. Bush and Mark Zuckerberg have nothing in common.

Bush, the 43rd president of the United States, is a Baby Boomer, while Zuckerberg, the founder and chief executive officer of Facebook, is a member of the millennial generation. Those facts alone, according to many contemporary sociologists, mean this pair should be participants in a culture war that’s currently being waged everywhere from the workplace to the political arena.

Despite their outward differences, however, these two got along quite nicely when they sat down for a chat at Facebook headquarters on Monday afternoon.

For Bush, this was one of many stops on a cross-country tour to promote his new book, Decision Points, which gives his personal perspective on what he regards as some of the most important moments of his eight years as the country’s chief executive.

Still, the hour-long conversation proved quite revealing in at least two ways: 1) It showed that the former president and the Facebook CEO — both of whom will loom as prominent figures when the history of the early 20th Century is written — are much more alike than outward appearances would indicate; and 2) It demonstrated the major impact that Facebook, and the underlying technology that spawned it, is having on the world at large.

First, let’s examine the similarities between the two men. It’s not likely that either will win any awards for public speaking in the near future. However, freed from the constraints of always having to appear presidential, Bush has developed a folksy speaking style, peppered with doses of self-deprecating humor, that enables him to connect with audiences quite well. He put that style to good use to break the conversational ice after a clearly nervous Zuckerberg ushered him on stage with a very brief introduction.

“Not exactly Jay Leno,” Bush cracked, as he took his seat between Zuckerberg and Ted Ullyot, Facebook’s general counsel, who then assumed the role of lead interviewer. That format allowed Zuckerberg to sit back, listen and interject questions as he saw fit, and that clearly helped turn what could have been an awkward 60 minutes into an interesting and insightful discourse.

As the hour unfolded, it became evident that Bush and Zuckerberg, even if this was the first time they met, have developed a mutual sense of respect.

The former president, always a champion of free markets, remarked how he admired Zuckerberg’s accomplishments as an entrepreneur, and how he loves a country that allows such dreams to flourish. Later, Zuckerberg commented that he always admired how Bush made decisions based on strongly held beliefs and then stuck with those decisions, even when public sentiment seemed to be against him.

“We (Facebook) have gotten some criticism,” Zuckerberg related. “Certainly not as much as comes with being president, but we have had some. And I’ve always admired how you handled those situations.”

In regard to understanding technology, Zuckerberg’s prowess in that area is evident in his creation of Facebook. But the former president demonstrated what many might consider a surprising level of clarity about the role technology is playing in society.

That was evident when Zuckerberg asked Bush why he had agreed to include a stop at Facebook headquarters on his book tour. “Because you have a lot of people paying attention to us, and I’m trying to sell books,” the president responded.

The audience laughed at that comment, but it clearly highlighted the former president’s understanding of how important social media has become to anyone trying to communicate with the masses.

Bush then pointed out that he has more than 600,000 friends on his personal Facebook page, which he uses to keep in touch with people who worked in his administration, “and folks who are interested in what [former First Lady Laura Bush] and I are doing.”

When it comes to his personal use of technology, Bush said he frequently plugged into an iPod while riding his mountain bike when he occupied the White House. As a private citizen, however, he rides unplugged, preferring the sounds of nature to electronic stimulation.

In the early days of his post-presidential life, Bush said he became a BlackBerry person, but recently he has switched to an iPad. In a statement that revealed just how much he understands the true impact of technology, Bush said he made a conscious decision not to use email while he was president.

“My administration was the first one to really use email,” he remarked, adding that requirements of the Freedom of Information Act prompted him to avoid being part of the email loop.

“By law, I was required to archive all my papers, which happened to be more than 20,000 boxes worth, and more than 170 million emails,” Bush explained. “I didn’t want any of those [emails] to be mine. The problem is if you were to read any of my emails today, you could read anything into them.”

With that one statement, this former president, whom many people assumed would have no clue about how to use technology, showed more understanding of its impact than a large portion of the 500 million who cavalierly use Facebook every day.

TechNewsWorld columnist Sidney Hill has been writing about business and technology trends for more than two decades. In addition to his work as a freelance journalist, he operates an independent marketing communications consulting firm. You can connect with Hill through his website.
A D V E R T I S E M E N T