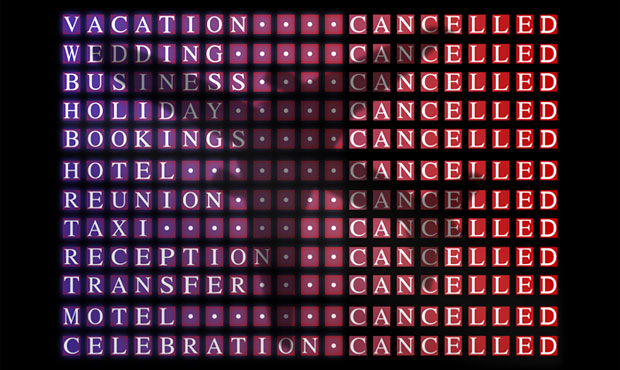 Delta Air Lines reportedly canceled 300 flights Tuesday morning, a day after a mammoth outage that forced it to temporarily ground thousands of flights worldwide and ultimately cancel more than 400 of them.

Although an update posted at 10:00 p.m. ET Monday night warned that there would be more than 100 flight cancellations and roughly 200 delays Tuesday morning, the actual numbers appeared considerably worse.

The disruption began with a power outage that took place around 2:30 a.m. on Monday at the airline’s Atlanta headquarters, according to Delta and Georgia Power.

Delta CEO Ed Bastian apologized to customers later Monday in a video message taped live from the airline’s operations and customer center, saying the carrier was engaged in an “all hands on deck” effort to restore service.

“I apologize for the challenges this has created for you with your travel experience,” Bastian said in his video message.”The Delta team is working very, very hard to restore and get these systems back as quickly as possible.”

The company instituted system-wide waivers, he added, which would allow customers to rebook their flights or get refunds without penalty. Those waivers were available through Delta.com and the company’s reservations agents.

The airline was investigating the cause of the outage, Delta spokesperson Traci Messier told TechNewsWorld on Monday, noting that it had not yet discovered the exact cause.

A hack may have been responsible, early media reports suggested, but that hypothesis remains unconfirmed.

Georgia Power responded to the outage, which appeared to be related to Delta equipment that interconnects with Georgia Power, which serves more than 2.4 million customers in the state, according to spokesperson John Kraft.

The utility’s other customers were not impacted by any power problems, he said, adding that Delta has been a great customer of Georgia Power for a long time.

Delta issued a number of updates on Twitter and its corporate website, noting that there were lag times on the flight arrival and departure screens at the airport and on its reservations site and mobile app.

Monday’s failure was one of a very few major outages at Delta in many years, according to Henry Harteveldt, a travel industry analyst at Atmosphere Research Group.

Delta generally has a strong record with handling technology issues, he noted.

“Clearly something extraordinary happened today,” Harteveldt told TechNewsWorld on Monday. “What I’m curious about is why the backup systems didn’t kick in to make sure the flights weren’t canceled.”

Delta responded admirably to the outage, which appeared to be limited to departure control systems, he said. The airline was able to get flights from Europe and Asia back on track and also was able to maintain its mobile app and website functionality.

The Delta outage followed by about three weeks an hour-long outage at Southwest Airlines, which was due to the failure of a notebook-sized router that didn’t “know” it had failed, said Melanie Jones, a spokesperson for Southwest.

“So it broke, but did not trip a backup,” she told TechNewsWorld. “It kept bringing traffic into itself for processing.”

That outage, which caused the cancellation of 2,300 flights, required Southwest to reboot all of its systems, which took hours to complete.

Southwest Airlines responded to its outage like the Keystone Cops, according to Atmosphere Research Group’s Harteveldt, who said it was “embarrassing to watch.”

Southwest had failed to make necessary upgrades in technology, he maintained.

Two major unions at Southwest called for the ouster of CEO Gary Kelly after that outage. However, the company pushed back, criticizing the statement as a negotiating tactic.

Southwest has taken action to shore up its technological defenses, according to spokesperson Jones.

“First, we have developed a backup procedure for this router ‘brown out’ condition, should it ever recur. The router in question is an older model, and we will soon have upgraded all routers that will be more reliable and not subject to a brown out,” she explained.

Beyond addressing the immediate problem, Southwest “will continue on our journey of updating, enhancing, replacing and modernizing our software, systems and technologies,” said Jones.

“We are also replacing, upgrading and modernizing our entire primary data center, currently housed in Dallas across the street from TOPS,” she added.

Delta has made healthy investments in its technology over the years, Harteveldt said.

The airline two years ago signed an agreement with Travelport to reacquire its data and intellectual property rights, which are critical for passenger service and flight operations.

The agreement made Delta the only major carrier to have direct control over those systems, the company said.

Under that agreement, Travelport continued to host the Delta platform of its Atlanta data center.

Delta previously was the owner of the Worldspan global distribution center, which Travelport acquired in 2007. GDS systems historically have been used by travel agencies to book reservations for airline flights, hotels, car rentals and cruises.