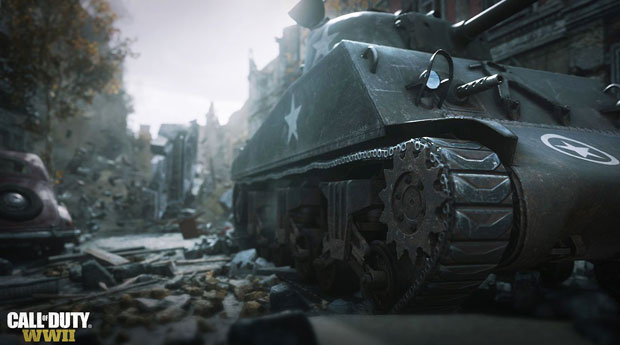 Call of Duty will return to its World War II roots when the latest title arrives this November, publisher Activision Blizzard announced on Wednesday. The franchise has been a steady hit maker since its 2003 debut. Various titles in the series have become regular staples in e-sports tournaments and Major League Gaming.

Call of Duty is one of the most popular series in video game history, selling a combined 175 million copies — second only to Take 2’s Grand Theft Auto franchise. The game has passed US$11 billion in total lifetime revenue.

Although the series has been a robust seller for Activision Blizzard, the critical response to recent titles hasn’t been as strong. In Call of Duty: WWII, the game once again set its sights on the military exploits of the Greatest Generation, including the D-Day landings.

The upcoming game will feature both a single player campaign, which will allow players to take the role of various characters at different points in the war, and an online multiplayer mode. The campaign will take place largely in the latter stages of the war, as the Allies liberate Nazi-occupied Europe.

Based on what has been announced so far, it seems that players will assume the role of Private Ronald “Red” Daniels of the American 1st Infantry Division. They can opt to fill the shoes of a British soldier as well, and even play as a member of the French resistance.

The game has not yet been rated.

Sledgehammer Games has promised that Call of Duty: WWII will be different from other shooters, as it attempts to reimagine the traditional first-person shooter model. Notably, the game will have a darker tone that doen’t shy away from the graphic horrors of war, and it apparently will ditch one of the genre’s longstanding features, namely the health-regeneration systems.

This means every bullet could have the character’s name on it, and while technically it won’t mean “game over,” it should change the gaming experience.

“This is going to be a more hardcore game, where the skill curve is greater and the challenges harder,” said Roger Entner, principal analyst at Recon Analytics.

“The graphics will also be more realistic, and that could make the violence seem even more intense,” he told TechNewsWorld.

“However, we have to realize that this is a title aimed at mature gamers, and today the average age for those gamers is in their 30s,” Entner added. “This isn’t a game for kids, but gamers are more than kids today.”

The original Call of Duty, which came on the heels of Electronic Arts’ Medal of Honor and Battlefield 1942 titles, scored a direct hit when it launched in 2003. Gamers couldn’t seem to get enough World War II action.

“The original Call of Duty was certainly helped by those other titles — but really by the number of World War II movies that brought the conflict to the mainstream again,” said Entner. “It was the beginning of the war on terror, and the game combined elements of heroism and patriotism, and people wanted to play out the exploits of these heroes.”

As the very real war on terror drags on without an end in sight, the modern conflict setting may have run its course, but the question is whether today’s gamers will be interested in returning to World War II again.

Call of Duty won’t be the first franchise to jump back to an earlier era. EA’s Battlefield 1 last fall proved gamers may have interest in period pieces. That game was one of the top sellers of last year, suggesting that fans may be ready for something different — but there are still risks.

“Games, like movies, have a huge upfront cost, and this is why we see so many sequels,” said Entner. “At the same time, the sequels need to be more than just more of the same.”

It’s possible some people with an interest in history will be drawn back to games, thanks to this World War II setting.

“I did witness a spurt of WWII awareness during the original Call of Duty’s popularity that I would attribute directly to the game,” said John Adams-Graf, editor of Military Trader, a publication devoted to military memorabilia and historical re-enactors.

“While its release was about the same time as the epic WWII film, Saving Private Ryan, followed by the HBO series, Band of Brothers, the level of interest in WWII small arms that I witnessed at that time probably had more to do with the game than with Hollywood,” Adams-Graf told TechNewsWorld.

The game could heighten awareness of the historical event as well.

“The depth of detail and in-game resources will give any gamer immediate access to more information about WWII, the men and women who served, and the weapons that were used,” he added.

Even though this game promises greater realism, thanks to improved graphics and gameplay, Activision and developer Sledgehammer Games may be ensuring that it has something for everybody.

Few details were provided, but based on the trailer and the official website, Call of Duty: WWII could include the popular “zombie” cooperative mode. This has been a regular staple of the series since 2008, with the release of Call of Duty: World at War, appearing in the subsequent Call of Duty: Black Ops titles.

“This helps give the game a low barrier of entry, and promises to have something for different tastes,” noted Recon Analytics’ Entner.

“This is for those who are in a beer-and-pretzels mood and want silly fun,” he said. “It is a way to get away from the realism that the other half of the game offers.”