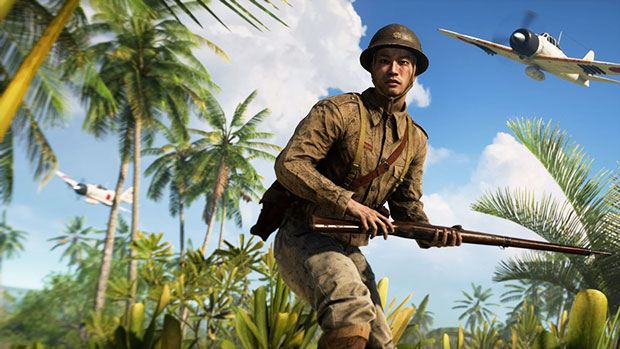 War in the Pacific is a free download that will be available on Oct. 31. New maps will include familiar stomping grounds such as Wake Island and Iwo Jima, and add American and Japanese factions to the game, along with a slew of new weapons and vehicles.

The trailer has the feel of a new game and seems far more encompassing than typical downloadable content — especially free content.

However, publisher EA and game developer DICE arguably have been underpressure to build stronger momentum for the game.

Battlefield V sold 7.3 million copies in last fall’srunup to the holiday season, based on reports released earlier this year. While that number indicates the game still has plenty of hardcore fans, the sales missed EA’s projections,which reportedly were closer to 8.3 million.

The shortfall in sales was due to the game’s delay from Oct. 19 toNov. 20. Now, a year later, EA and DICE apparently are ready tomake up the proverbial lost ground by letting players storm thedigital beaches of the Pacific.

EA’s Battlefield series returned to World War II last fall. Theprevious game in the series, Battlefield 1, focused on the First World War and theRussian Civil War. It included numerous factions not only from theAllied forces (including the French, British, Americans, Russians andItalians) and Central Powers (including Germans, Austrians andOttomans), but also from the Bolshevik “Red” Army and “White” Army inRussia.

With BFV players so far have been able to play only as the British andGermans. DICE went to great lengths to set the game in areaslargely not covered in World War II shooters — such as Norway and theNetherlands.

One of the game’s free download chapters includes a single-player onlycampaign that allows the player to take the role of a German soldierin World War II, a first in gaming. It was just one of thecontroversial moves that the developers made with this latestBattlefield title — and it followed the inclusion of women characters.

Whether Chapter 5: Return to the Pacific will beembraced by gamers, with its new setting and factions, is the question.

“There has been poor coverage of the WWII Asia Pacific Theater ingames,” he told TechNewsWorld. “Red Orchestra 2: Rising Storm isthe last title I remember addressing this theater of war, and that wassix years ago.”

The Pacific theater of World War II never has been aspopular with gamers as the European theater, and this no doubt is whyEA made its return to World War II in Europe. Rival Activision also jumped back into action with its Call of Duty: World War II series two years ago.

Since the initial release of BFV last fall, gamers have clamored foraction on the Russian front, which was the site of major tank battlesand city sieges. Will gamers be as excited by a return to the Pacific?

“It will depend a lot on how well the new Midway movie does,” said RobEnderle, principal analyst at the Enderle Group.

“Initial reports on the movie look positive, but it doesn’t really hituntil Nov. 8,” he told TechNewsWorld.

The upcoming Midway movie chronicles the June 1942 battle widely considered the turning point in the war. It wassaid the Japanese never lost a battle in the Pacific before Midway,and never won another battle afterward.

Midway was a naval battle fought with aircraft,and while BFV does have planes and ships, it doesn’t chronicle beachlandings or infantry engagements.

“But if the movie does well, Battlefield V should be able toslipstream the movie,” suggested Enderle. “You need something to createdemand for a game like this, and EA has been light in terms of demand- generation efforts. A hit movie that gets gamers excited about the subject matter could do the trick.”

Beyond controversies, historic games face scrutiny for historicalaccuracy — everything from the locations to the equipment. A certainlevel of suspension of disbelief is required with all games, butmilitary-themed games do get called out for missing the small details.

“It actually looks pretty cool, but the action in the video was toofast to process everything,” said John Adams-Graf, military historyauthor and editor of Military Trader/Military Vehicles magazines.

For those in the know, it is easy to spot those small details, likethe wrong helmet being worn by the Japanese soldier in the trailer, or inaccurate equipment and field gear. A bigger issue is the depiction of the American soldier, who seemed a bit out of place in a World War II setting.

“The designers may have been going for the photo of the flag raisers at Iwo Jima, but they really missed the mark,” he added.

It is a small detail, but one that has been called out online already,as have some of the planes and weapons.

“The Corsairs (fighter planes) are depicted in what looks like theearly war camouflage, but then I see Japanese flying bombs that onlyappeared in late 1944 and early 1945, so it is hard to know what yearthe game is depicting,” said Adams-Graf.

Most gamers may look past such issues and enjoy the game for what itis: a generic World War II shooter that doesn’t try too hard to takeitself seriously.

Even if the hardcore history fans don’t embrace the latest expansion,the Battlefield series has done well enough with the core gamers, andReturn to the Pacific is almost like a brand new game. That alone should help boost sales.

“For a game of the size and scope of Battlefield V, there are stillopportunities to be taken advantage of, even if the game underperformsby certain expectations,” said Steve Bailey, senior analyst for games,technology, media & telecoms at IHS Markit in London.

“There’s a road map of ways in which users can be retained and ultimately monetized in ongoing fashion,” he told TechNewsWorld.

“For example, Rainbow Six: Siege has been a success story for Ubisoft,but experienced a rocky launch,” noted Bailey.

In that case Ubisoft invested in a series of responsive updates, whichallowed the game to find its feet and audience and then go fromstrength to strength.

“A similar idea holds for Battlefield V, in that there may still be acore of users who remain highly engaged with the title, and well-madeupdates can even bring lapsed players back into activity,” Baileyexplained.

Even though the game underperformed last year, in part due to the delay,the right downloadable content could help it find a largeraudience. Such add-on content usually doesn’t come cheap, but thistime around EA isn’t charging owners of the game for the Return to thePacific.

Instead of a full-blown expansion, something game developers previously havecharged for — the content this time around is being offered for free to build a loyal audience.

“There’s further value to be found from investing in such a sizablefranchise. Any resulting momentum established late into the game’slifecycle could transfer beneficially to the next title in the series,and help it get off the ground,” said Bailey. “The point remains,however, that online shooters are an extremely competitive segment, andany success is likely to be hard-fought.”