If you want to know why the netbook is headed to the endangered species list, take a look at Gateway’s new ultraportable. 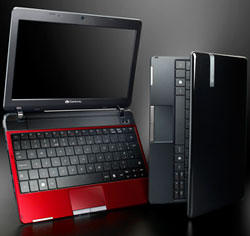 The handsome offering with the bland designation “EC 1437u” has power, performance and a small footprint, all for a very reasonable price of US$549.99.

When the notebook is pulled out in a crowd, its glossy, cherry-red shell is sure to evoke envious questions about its origins.

Although larger than most netbooks, the Gateway model is still smaller than a clipboard, albeit thicker and heavier. It measures 1.18 by 11.22 by 8.03 inches and weighs three pounds, 3.5 ounces.

The notebook displayed peppy performance operating under Windows 7 Home Premium edition. It has an Intel dual core Pentium processor (SU4100) clocked at 1.3 GHz per core (FSB 800 MHz) with an L2 cache of 2MB. Graphics are rendered with Intel’s Graphics Media Accelerator (4500MHD), and the unit is built around Intel’s GS45 Express chipset.

It also has 3MB of DDR2 dual-channel 667MHz RAM and a 320GB SATA hard drive running at 5,400 RPM. Like most netbooks, it doesn’t have an optical drive. That can create some initial consternation when system messages start popping up asking if you want to create a Gateway recovery CD and there’s no CD drive to create one on, but those messages can be turned off for peace of mind.

Intel’s Consumer Ultra Low Voltage (CULV) technology is incorporated into the notebook, and its stingy power consumption is astounding.

What’s more, the device comes with a six-cell lithium ion battery (5600 mAh). Unlike some six-cell power plants, this one doesn’t mar the computer’s svelte contours with a bulging waistline. Gateway rates the battery at over six hours run time. Experience bore out that rating. It’s fact, not brag, as it is with most manufacturer ratings.

Moreover, with Windows 7’s improved sleep mode, you don’t have to be afraid of walking away from the notebook for an extended amount of time only to find the battery depleted and a reboot in order.

The notebook has a very sharp, bright and richly colorful LED backlit display. Measuring 11.6 inches diagonally, the Ultrabright widescreen has a 16:9 aspect ratio and resolution of 1366 by 768 pixels.

Although the laptop’s QWERTY keyboard is slightly smaller than a full-sized clavier, it has a very good feel. Its keys are amply sized even for typists whose hands are closer to hams than pinkies.

Screen navigation can be performed with an inverted T arrow pad conveniently located at the right corner of keyboard and through a two-button touchpad. Items can be selected with the touchpad’s buttons or by tapping the pad’s surface. Scrolling within windows can be performed by dragging a finger along the right side of the pad.

High-definition audio is supported by the notebook, and for a computer this size, the speakers are very good. External speakers can be attached to the laptop through it speaker/line out jack. The unit also has a headphones jack that supports Dolby Headphones Technology.

In addition, the notebook has three USB 2.0 ports, as well as HDMI and VGA ports for attaching a monitor.

For video chatting, the notebook has a webcam with a built-in microphone placed in the border above the display. The camera shoots stills and video.

Software for the notebook is the typical undistinguished standard fare for a PC. There’s Microsoft Works, which will no longer be produced after this year, and a 60-day trial version of Microsoft Office 2007 Home and Student edition.

There’s also some DVD production software — Microsoft DVD Maker and CyberLink PowerDVD 8 –which is curious since the notebook doesn’t have a DVD drive.

Security software, which no Windows machine should be without, includes Norton Internet Security 2009. That’s only good for 60 days, though, and then you have to buy an annual subscription to the program or protect the computer with something else.

Although nary a pop-up nag appeared while using Windows 7 (a blessed relief, I’m told, compared to Windows Vista) that function appeared to be co-opted by the Norton Suite. During the first few hours using the notebook, Norton seemed to be constantly adding its two-cents to my activity. Fortunately, the nags could be turned off.

For anyone who likes the netbook’s form but may feel queasy about its functionality, the Gateway EC1437u is an excellent alternative. What’s more, anyone looking for a powerful multimedia notebook in a compact package will love the Gateway machine, too.

While more than a few cyberpundits have been predicting the demise of netbooks for some time now, the arrival of the Gateway EC1437 and its brethren may finally fulfill those predictions.