Ford Wants Smart Cars and Homes to Talk to Each Other 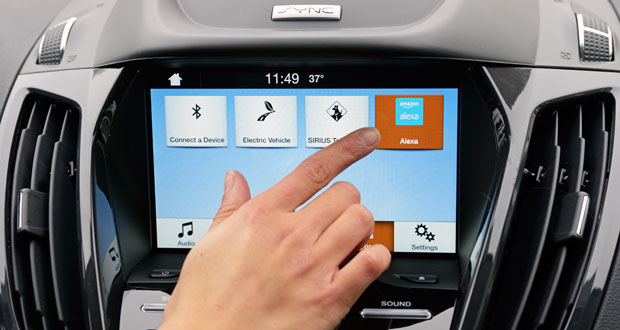 One of the highlights of Ford’s Tuesday CES event was its announcement of plans to connect its Sync smart car technology with smart home applications from Amazon and Wink. The integrations will give consumers remote control of things like home security and lights from their vehicles, along with the ability to unlock car doors and turn on the ignition from their living rooms.

Ford, which has more than 15 million Sync-equipped vehicles on the road today, will link its new Sync Connect technology with Amazon’s cloud-based Alexa software, to let drivers use voice commands to manage functions such as checking fuel levels and finding vehicle locations.

At home, users could access Alexa via their Echo speaker units to obtain information about their vehicles and manage schedules and settings.

Ford intends to connect its Sync AppLink with Wink’s smart home technology to remotely open a garage, unlock a front door or turn on the house lights, among other things.

Using technology from Amazon and Wink would let Ford customers stay in touch with their vehicles “even when they aren’t behind the wheel,” said Don Butler, executive director of Ford’s connected vehicle and services business.

Amazon Echo, a hands-free device equipped with seven microphones, runs the Alexa software in order to function as a personal assistant. It plays music; delivers audio news, weather and sports reports; answers a broad variety of questions; and works with various connected home services to control lights and other functions in response to voice commands.

Wink the Lights and the Front Door

Wink offers two physical products for interacting with the Wink app: the Wink Hub, which lets devices communicate with one another; and the wall-mounted Wink Relay touchscreen control panel. Both are sold on Amazon and in Home Depot stores in North America and work with various platforms, including Nest, Schlage, Amazon and others, to handle tasks like raising the blinds, adjusting a thermostat, or turning lights on or off.

“We’ve only reached the tip of the iceberg in terms of what’s possible with the smart home,” Wink spokesperson Patrick Mahoney told TechNewsWorld.

Wink is looking into ways to expand the use of the technology through advanced machine learning and predictive capabilities that could enable the smart home to automate itself.

Thus far, manufacturers like Ford and Mercedes Benz have integrated smart cars with home thermostats controlled by the driver.

“With the smart home expected to grow, this is an interesting feature for OEMs to integrate in order to provide useful services for the driver,” Chandrasekar told TechNewsWorld. “Ford has been at the forefront of connected solutions using its Sync platform, and their developer program AppLink was the first to market to drive many innovative apps.”

Ford announced a plan to have AT&T 4G LTE in its cars late this year, starting with the 2017 Escape model, he said.

The companies plan to deliver the Ford Sync technology to more than 10 million customers over the next five years, according to AT&T.

Ford joined DJI at CES to announce the DJI Developer Challenge, encouraging developers to create new drone-to-vehicle technology that could be used for such applications as guiding a vehicle through areas struck by earthquakes or other disasters. The winner of the challenge will win US$100,000.

Ford also announced it was tripling its fleet of fully autonomous Ford Fusion hybrid test vehicles, bringing a total of 30 such cars to Arizona, California and Michigan roads for testing.