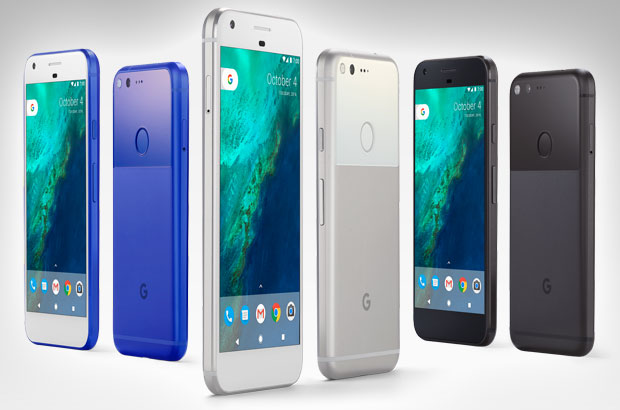 Welcome to Gadget Dreams and Nightmares, the column that’s taken just enough time away from pondering how many major email providers have built tools to let the government scan everyone’s messages to pore over Google’s latest hardware.

In our trove of data this time around are Google’s smartphones, virtual reality headset, smart speaker and updated Chromecast.

As always, these are not reviews. The ratings, meanwhile, reflect just how much I’d like to try out each item, even if they do relatively little to advance the lethargic smartphone market.

The first smartphones Google has made by itself, Pixel and Pixel XL, are the first to bear Android 7.1 and the first to have the impressive Google Assistant built in.

The Pixel has a 5-inch HD screen, while the Pixel XL offers a 5.5-inch QHD display. The phones have a quad-core processor and 4 GB of RAM.

I like that the fingerprint sensor is on the back — that would nullify the awkward fidgeting I deal with every time my iPhone fails to recognize my thumbprint — and the inclusion of an analog headphone jack is extremely welcome in the wake of the kerfuffle over Apple’s decision to ditch it.

The iPhone 7 does have one audio advantage, with stereo speakers to Pixel’s single speaker.

I appreciate Google’s ability to house the 12.3-megapixel camera entirely within the phone’s body, avoiding a lens protruding from the back. Even better is the unlimited, full-resolution photo and video storage Google is offering Pixel owners.

There’s a lot to admire about these phones, but I can’t seem to muster up any real excitement for them. They seem perfectly acceptable top-of-the-line smartphones with welcome features — yet there’s little that seems truly innovative or remarkable.

Pixel and Pixel XL are good first steps for Google’s in-house smartphone division. I can only hope the next stage is more of a giant leap.

Rating: 4 out of 5 Millions of Photos

Google also has its own virtual-reality headset, Daydream VR. It works much like the Samsung Gear VR, or even Google’s own Cardboard, in that you slide a compatible smartphone (such as Pixel) into the front of the visor and strap the thing to your head. The headset automatically pairs with the phone using the handset’s NFC chip.

Where Daydream VR has a big advantage, at least from my perspective, is in the soft material build that accommodates eyeglass wearers. I find Oculus Rift exceedingly uncomfortable while wearing my spectacles, so thanks for that, Google.

Along with physical buttons, the controller has motion detection, which I’m sure will come in useful for gaming. As for content, you’ll be able to step into real-world locations using Google Street View and look around YouTube’s 360-degree videos. Netflix, Hulu and HBO apps will work with the platform too.

As with Gear VR, this is a low-cost way for people to start experimenting with virtual reality. I like the design of this system, but the platform’s future will hinge on content and how successful Google is in recruiting developers and partners to take advantage of Daydream VR.

Rating: 4 out of 5 Whole New Worlds

Google’s smart speaker, Google Home, is not all that different on the surface from Amazon Echo, save for being US$50 cheaper and being deeper ingrained into Google’s services instead of Amazon’s.

I like that it works with Chromecast, so I could ask Home to play something on my TV instantly (YouTube-only now for video, but more services are apparently on the way). On the music side, you can play from Spotify, Pandora, and others.

If you get tired of using your voice, you can tap the top to pause or play music or roll your finger over it to adjust the volume. The design is simple and classy, and I like that there are swappable options for the base.

Smart speakers are inherently interesting, and I certainly use Google services more than Amazon. I’m just not sure how useful Home truly would be for me, or quite how it would fit into my life. Still, if I can just bark at a box to start playing the next episode of Luke Cage, I won’t complain.

Rating: 4 out of 5 Simple Orders

Chromecast Ultra streams video in 4K resolution, strangely enough. For those of us without a 4K-ready television, it’s apparently faster than previous models, thanks to stronger WiFi connectivity, and there’s a welcome Ethernet port to boot.

It’s an iterative change, rather than a revolutionary one, which makes sense. There seems little reason for Google to reinvent the wheel when Chromecast is such a runaway success.

Roku just updated its line of players, and the entry-level cost of those devices is far lower than Chromecast Ultra’s $69 retail price. However, such is the ease of use of Chromecast that I doubt Google will cede much of its business to Roku. This latest version is bound to be just as solid as previous incarnations.

Rating: 5 out of 5 Endless Binge-Watching Sessions