Google’s Smart Contacts Could Save Diabetics a Lot of Pricks

Google is taking the wearable tech trend to a new level. The company has announced it is working on smart contact lenses that measure the level of glucose in one’s body.

Diabetes affects around one in 19 people in the world, many of whom struggle to control the levels of blood sugar in their bodies, Google said. Blood sugar imbalances can lead to issues with eyes, kidneys and hearts.

Most diabetics need to prick their finger and test blood during the day.

Many check their glucose levels less often than they should, due to the discomfort and disruption associated with those tests. Given how sharply glucose levels can change when eating, exercising or simply sweating, it would be helpful for diabetics to monitor their blood sugar levels around the clock. 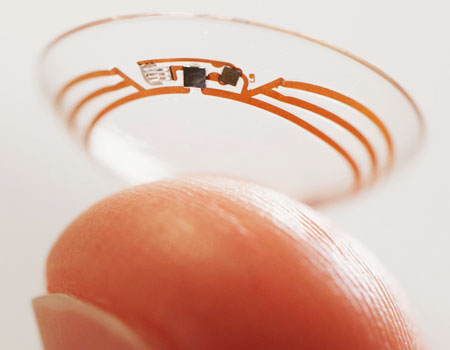 Tears provide a way to measure glucose levels, but they can be difficult to collect. So a team at Google attempted to look at whether miniature electronics — with chips and sensors the size of glitter, and antennae thinner than human hair — could provide a solution.

The firm is now testing a smart contact lens that packs a chip and glucose sensor between two layers of contact lens material in order to measure glucose levels in tears. Prototypes the company currently is experimenting with generate readings once a second.

The team is looking at how the lenses could provide early warnings to wearers, such as through miniature LED lights that indicate when glucose levels are spiking or dropping below certain points.

Although Google has already completed several clinical research studies and has been in contact with the U.S. Food and Drug Administration regarding the project, the technology is still in its infancy, the company said.

Google plans to team up with partners that have experience in shipping such products to market. Those partners, ideally, would use Google’s technology and develop apps that make the data accessible to wearers and their doctors.

Google is working on the contact lenses out of the same experimental Google[x] lab that birthed projects such as Google Glass, the driverless car and Project Loon — the attempt to bring Internet access to developing countries through a network of balloons.

“When it comes to healthcare and health monitoring, the entire concept of [the Internet of Things] will be earth-shattering, but it will still have years of technology evolution to get there,” he told TechNewsWorld.

“In essence, this could change managing diabetes from a manual procedure to a constant automatic process,” Charles King, principal analyst at Pund-IT, told TechNewsWorld. “If it is successful, diabetics using the technology would likely have fewer spikes in their blood sugar and, as a result, experience better overall health.”

Smart contact lens technology could have other body-measuring capabilities in the future.

“Depending on what sensors you can put in the lens, you could harvest all kinds of information about the body,” Tirias’ McGregor noted.

“The bigger picture here is in what smart contact lenses portend for other wearable healthcare technology,” said Pund-IT’s King. “If Google’s solution works as the company hopes, we are likely to see a growing number of devices designed to reduce the hassles and improve the outcomes of a variety of medical monitoring and treatment processes.”