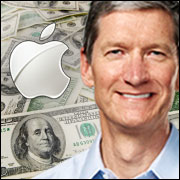 The Apple deal with IBM has shown us a whole new side of Tim Cook –the gushing, hype-laden, excited-but-still-vague Tim Cook who says things like “kindred spirit,” “fits together like a puzzle,” “huge opportunity,” “radical step for enterprise,” and “new level to achieve in business.” Who peppers his speech with words like “profound,” “complementary,” “landmark” and “thrilled.”

Now, I’m a big fan of Tim Cook, but when he uttered this in an interview with CNBC, “We fit together like a puzzle, and so this isprofound. It is landmark. It’s historic,” my mouth dropped open and Ifelt compelled to look away.

I understand it when Cook hypes up Apple products he’s excited about,and off-the-cuff video interviews are hard to do well — but there’smore. A lot more.

In this week’s fiscal Q3 conference call with WallStreet analysts and investors, Cook talked up the IBMpartnership multiple times, while offering almost no real details as to whatApple actually will do with IBM, or how the business end of thepartnership actually might work.

What strikes me as most important here is how Cook is putting his namebehind the deal with IBM. In fact, I think it’s startling how much hehas been willing to hype this deal — putting his reputation behindthe partnership, which isn’t even a slam dunk.

While it looks like IBMcan start peddling iPads for Apple, the whole point of the deal isgetting IBM’s MobileFirst for iOS Big Data apps down to the”fingertips” of enterprise workers, which requires a helluva saleseffort on the part of IBM — none of these apps or services are cheap,no-brainer buys, and most of them tend to have long sales cycles.

Of course, you can expect Apple to generate revenue when iPads aresold (or leased) into IBM’s enterprise accounts around the world, butis that it? Enterprise AppleCare is likely part of the revenue deal,but what about the multibillion dollar value of all these new IBMMobileFirst for iOS enterprise apps? Will Apple share in the revenuegenerated by them? Or simply be happy with hardware sales?

What about their so-called collaboration? If IBM or Applehas said that IBM would be developing MobileFirst apps exclusively for iOS — andnot for Android or Windows — I haven’t seen it. Now that would be alandmark deal. But maybe Apple is simply willing to help IBM make bettermobile apps than what it might be able to create with, say,Android-based apps.

To what degree will Apple actually help IBM do this? How many Apple developersand UI experts actually will engage with IBM? Will a dedicated team ofApple employees actually work side-by-side with IBM employees on more than 100industry vertical apps? Or will IBM’s people just tell Apple’s people what sort ofsecurity challenges its customers face and let Apple decide whetherto address those concerns — or not — in future releases of iOS?

Spell It Out, Tim

What I’m saying here is this: If this deal is so amazingly “landmark,”the details provided do not match the hype. If the collaboration isreal, it would be fairly easy for Tim Cook just to say something like this: “Wehave a dedicated team of two dozen Apple design or programming expertswho will work directly with IBM to make sure that IBM is able tounlock existing features — and some future enhancements — in iOS and iPads, sothat hundreds of new enterprise apps will be able to take advantage ofour tech more quickly than ever before.”

That’s still relatively vague, but at least it would give us a hintthat the collaboration with IBM would extend much deeper than collaboratingon how to handle invoicing.

IBM, it turns out, on its landing page for hyping thepartnership, provides something slightly concrete: “Right now,engineers, designers, and developers from both organizations areworking on more than 100 end-to-end mobile solutions, including a newcategory of mobile apps, that are ready for the enterprise.”

That’s still vague, though. If IBM were working with only one Apple liaison, it wouldstill be true — and there is nothing even close to that on Apple’s muchsmaller iPad in Business landing page.

Personally, I’m taking all this with a grain of salt. Enterprise via IBM may seem like a low-risk way to generate iPad sales, as well as a way to hedge against scrutiny over Apple’s ability to grow. However, if iPad sales should continue to slow — particularlyin the U.S. — and if Apple’s competitors should gain a foothold, then Tim Cook may findhimself taking a whole new blast of heat from Wall Street.