Before the Large Hadron Collider (LHC) near Geneva, Switzerland, can begin to unlock the mysteries of the universe — as physicists around the world hope it will — it has to be taken for a series of test drives. Scientists on Monday did just that, driving protons into each other at energies approaching 550 billion electron volts, and the resulting successful collision is being hailed as an important first step to realizing the LHC’s ultimate capabilities. 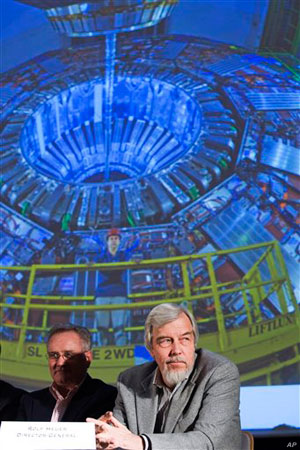 Rolf-Dieter Heuer, right, director general of CERN, and Steve Myers, left, CERN’s director for accelerators and technology, during a press conference on the LHC near Geneva, Switzerland, on Monday.

“The way complicated accelerators are built, you go through a commissions process. You start at low energies and work your way up, teaching the machine to behave, and all its millions of parts,” Fred Dylla, executive director of the American Institute of Physics, told TechNewsWorld. “The fact that they went from a single beam (of protons) last week, to two counter-rotating beams that could be focused at hitting each other at distinct locations in such a short period of time means that things are going well.”

It also means that the LHC’s team of scientists can put a little more distance between themselves and the September 2008 failure of critical components, which shut down the US$15 billion dollar collider while repairs were made.

“This is really by any measure the most complicated experiment and most complicated machine ever designed and built,” Dylla said. “For it to have startup problems like it did last year, that’s to be expected. They wouldn’t call it ‘research’ if they didn’t have these things. It’s not like you buy one of these things from Wal-Mart and plug it in. It was a 15-year effort to design and build a first-of-its-kind machine to run at these energies and intensities. They seem to have come back nicely from that (accident).”

Monday’s developments near Geneva particularly excited Henry Lubatti, a University of Washington physics professor who helped to design and build some of the 90,000 tubes used in Atlas detectors. It’s part of an experiment that may help find the Higgs boson, or so-called “God particle” that is theorized to have played a key role in how particles acquired mass at the beginnings of the universe.

“We’re just at the beginning and have a lot of tuning to do before we have data, but it’s incredibly exciting to have seen a few collisions at this early stage,” Lubatti told TechNewsWorld by phone as he was about to get on a plane to return to Seattle from Fermilab near Chicago, where was monitoring LHC activities. Fermilab is home of the Tevatron accelerator, which currently holds the record for collider energies attained, although that title will be relinquished once the Hadron collider’s 17-mile-long atomic racetrack gets up to full speed, with potential energies reaching 7 trillion volts.

“This shows to me how well the Hadron accelerator’s experts have understood and mastered the control system of that very, very complicated system,” Lubatti said. “This for me is a fantastic moment.”

For Lubatti, the moment comes near the end of a nearly 20-year period in a career focusing on what colliders may be able to tell science. He was involved in the U.S. superconducting supercollider project in Texas in the early ’90s, but funding issues and other controversies forced cancellation. Now he will has plans to fly to Geneva after Thanksgiving to see first-hand if his career’s work will result in answers about the Higgs boson and universal “dark matter,” and watch as his colleagues attempt to create mini-black holes in the LHC.

“To see the enthusiasm my colleagues and I are sharing, to see the interest, is amazing,” he said. “This is energizing people whether they are scientists are not. This will further our understanding of nature. This will point the way. We’ll find the path indicating where we should be looking in trying to understand nature and our environment.”

A Triumph of Science – and Diplomacy

There are the inner workings of the Hadron collider — the magnets, tubes and other equipment that power the massive science experiments. There are the many separate scientific disciplines involved in making the collider work — physics, engineering, computer science, cryogenics. And then there’s the idea of 100 scientists from all over the world working together from the design phase through construction — and now into the testing stage.

That little-discussed aspect of the LHC sets a very powerful example for the rest of the world, particularly its politicians, according to Dylla.

“That’s a very important part of this experiment — showing that with machines so complicated and expensive, they have to be done on an international scale. The secondary result shows how international diplomacy and collaboration can work in very effective ways that you don’t often see,” he said.

The collider story has had an impact on pop culture, Lubatti has also noticed, particularly on claims that creating mini-black holes will bring about a “2012”-worthy apocalypse. “I’m going to be in the control room and I have personally no worries about any issue that might endanger me,” he said with a laugh. “We hope to make mini-black holes, but because they will be so tiny they will immediately evaporate.” Yet the particles those black holes will throw out before they disappear could unlock more mysteries of the universe.

“That’s another thing that would be exciting — confirmation of the whole concept of black holes,” Lubatti said.