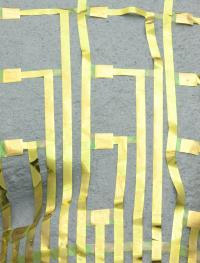 Neural electrode array wrapped onto a model of the brain. The wrapping process occurs spontaneously, driven by dissolution of a thin, supporting base of silk. (Illustration courtesy of C. Conway and J. Rogers, Beckman Institute)

Up to now, devices designed to measure and enhance signals routed through brain circuitry have been hampered by the complexities of the folded surface of brain tissue. However, scientists have announced the development of a brain implant that conforms so closely to the brain’s surface, it “essentially melts into place,” according to a study published in Nature Materials.

The material is thin enough to follow the folds and curves of a human’s “bumpy brain,” he explained, but strong enough to allow complex electronic circuitry to be printed on it.

The implants have possibilities for treating epilepsy, spinal cord injuries and other neurological disorders, said Walter Koroshetz, M.D., deputy director of the National Institute of Neurological Disorders and Stroke (NINDS), which funded the research. The super-thin devices can record brain activity more accurately than currently used thicker implants, which typically are made with electrodes affixed to more rigid silicon grids.

The first human applications of the new technology likely will be in the diagnostic arena, said Kaplan.

The implants can “better track brain function with higher resolution and sensitivity to determine where things are malfunctioning,” he noted. The electrodes printed on the surface of the silk material are only about 500 microns thick, or about five times the thickness of a human hair. The flexibility of the material also reduces the sharpness of the edges of the implants and should cause less damage to brain tissue.

Later, the printed circuitry could be used to “deliver electrical stimuli to select regions of the brain and improve therapeutic treatment,” predicted Kaplan.

Thus, the implants could be used to first detect and then interrupt seizures by delivering electronic pulses that would stop the abnormal brain activity.

In the case of people with spinal cord injuries, the technology has promise for reading complex signals in the brain that direct movement and then routing those signals to healthy muscles or prosthetic devices, according to the researchers.

One challenge to using brain implants is placing them accurately, Kaplan noted. The silk film developed in this case can be made optically clear, allowing medical personnel to place it without having their vision blocked by the material itself.

In addition, the silk “platform” can be designed to dissolve once it is in place, leaving only the printed electrodes behind, he said.

The material also can carry medications to be delivered directly to brain tissue, providing a new channel for delivering pharmaceutical treatments in addition to electrical stimulation of brain tissue.

The liquidized silk protein used to make the film can be engineered to avoid inflammatory reactions, reported the researchers.