Microsoft Tells Devs to Talk to the Bots 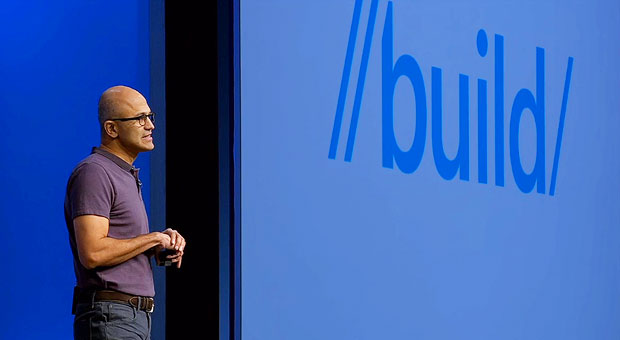 Microsoft CEO Satya Nadella and members of his leadership team, speaking to developers Wednesday at the Build 2016 conference, introduced their vision to infuse human speech and machine learning into the company’s consumer and enterprise businesses, positioning Microsoft as a major player in the cloud services and artificial intelligence space.

Nadella and Terry Myerson, executive vice president of the Windows and Devices Group, introduced a series of upgrades to Windows 10 and Cortana as well as technology called “Conversations as a Platform,” which will provide new levels of collaboration and productivity never seen before in a Microsoft suite of products, the company said.

“It’s about taking the power of human language and applying it more pervasively to all of our computing,” Nadella said.

Among the innovations Microsoft announced is a new level of capabilities added to its Cortana Intelligence Suite, previously known as Cortana Analytics Suite. The first addition, called “Microsoft Cognitive Services,” is a collection of intelligence APIs that allow systems to hear, speak and interpret interaction with humans and communicate that using natural speech patterns.

Microsoft is opening up the development cycle to outside developers in order to help make its embrace of AI and bots more appealing to the enterprise customer, which is a core strength the company has over many of its competitors, he told TechNewsWorld.

The company showcased its three-dimensional HoloLens, which allowed a Case Western professor to transport his head and hand onto the stage and students to visually examine a three-dimensional scan of the human body, giving them a unique view of various organs.

“In terms of artificial intelligence, this is what many of us think is the future of computing, and Microsoft’s focus on the category seemed light,” said Rob Enderle, principal analyst at the Enderle Group.

“With these announcements, Microsoft is showcasing they don’t just want to play, but they want to lead with increasingly intelligent cloud services and tools,” he told TechNewsWorld.

Dartmouth-Hitchcock Medical Center is using Microsoft’s technology to provide personalized healthcare monitoring to patients through a system called ImagineCare. Patients wearing Microsoft Band activity trackers and using smartphones are monitored from home, instead of having to run to a doctor’s office.

A patient with unusually high blood pressure, for example, would have that information uploaded into a cloud-based system that could alert a nurse, who could then remotely examine various symptoms and activities and contact the patient for further evaluation.

The company’s Seeing AI app uses AI to help give the visually impaired more information about the world around them. For example, a blind person sitting in a diner with a paper menu could shoot a photo of the menu with a smartphone, and the app would read the menu out loud.

In another example, a blind person sitting in a meeting could use smart glasses to scan the other attendees. The app would describe their approximate age, gender and emotions, giving the visually impaired person a better read on how well the communication is going.

Microsoft also introduced a series of upgrades to the Windows 10 platform, which it said is the most successful upgrade of an operating system in its history. It has 270 million active users, which is 145 percent ahead of Windows 7, Executive VP Myerson told developers at the conference.

Among the upgrades available under the Windows 10 anniversary edition, Cortana will offer a more sophisticated array of capabilities, including the ability to talk with users when the computer is locked and logged out. Windows Ink will let users draw on their computers as if they were sheets of paper, marking up whiteboards and sticky notes. Windows Hello will expand the security protection of Windows to the Edge browser and to other devices.

Partners such as Bank of America, Facebook, Starbucks, Square Enix and Wargaming are developing apps for Windows 10.