With high-definition video popping up everywhere, it’s a wonder it has taken this long for the first 720p HD webcam to hit the market. It’s Microsoft’s LifeCam Cinema webcam, and not only is it a honey of a webcam, but at US$79.95, it’s nicely priced to boot. 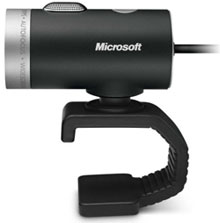 Installation of the camera requires three steps: downloading and installing the latest software, installing Windows Live Essentials, and finally, configuring the webcam. Minimum requirements for the webcam are an Intel dual-core processor running at 1.6 MHz or better, 1 GB of RAM and 1.5 GB of hard disk space. Some features require speakers, headphones and high-speed Internet access.

I connected the camera to a USB bus rather than directly to a USB port on my computer. Some devices don’t like that arrangement, but LifeCam HD was amenable to the hook up.

My first attempt to set up the webcam’s software produced an error message — something about Microsoft failing to sign some files — and an aborted the installation. I noticed that I had Firefox running when I tried the install, so I shut the browser down and restarted the process. It succeeded on the second try without a hitch.

Typically, webcams are round and resemble flying saucers. Not so with the LifeCam HD. It’s tube-shaped. Not only is the design attractive to the eye, but it facilitates the addition of a lens hood, which reduces lens flare from light sources.

Another common characteristic of webcams is the use of cheap plastic lenses. Not only does Microsoft use glass for all five elements of the LifeCam Cinema’s lens, but it used in-house experts to design the optics for the glass. Moreover, each glass element is treated with a lens coating to minimize reflected light from the surface of the lens. Reflected light can add noise to an image as well as create unwanted artifacts like ghosting and glare. The result is a very high-quality image, especially in HD mode, 1,280-by-720 pixels, with terrific edge to edge sharpness.

The black and silver webcam attaches to objects via a rubber mount at the bottom of the unit. While the mount’s flexibility allows it to conform to a variety of shapes, it doesn’t seem to clamp very securely to any of them.

There’s a minimum of controls on the unit. A microphone protrudes from the top of the webcam. Behind it is a button for making live video calls using Windows Live Messenger. When the camera is active, a blue LED glows beneath the lens at the front of the unit.

The LifeCam Cinema is the first consumer webcam with a 720p HD sensor, according to Microsoft. It can also display video in a widescreen — 16:9 — format and capture it at a maximum of 30 frames per second. Seven resolution levels are supported by the camera from 160 x 120 to 1,280 x 720 pixels. Since most computer and laptop screens rolling into the market these days have wide displays, the webcam allows you to maximize the image area for the unit on your monitor. Moreover, with the webcam’s expansive 74 degree field of view, you don’t have to worry about squeezing multiple people into a frame when conducting a video chat with friends, relatives or colleagues.

Since most webcams are used in dim lighting conditions — there may be a single desk light in a room or the only light source may be the computer screen itself–Microsoft amped up the LifeCam Cinema’s low lighting performance so it will deliver more frames per second throughout the brightness spectrum. For the most part, the camera rendered video well in typical desktop scenarios, although in very low light conditions, images in the camera window got very noisy.

Video quality is also improved in the camera with a technology called “ClearFrame.” ClearFrame analyzes your computer and automatically chooses an optimal camera resolution and frame rate for it. The technology also smooths video action by using an advanced MJPEG process and reduces image graininess with its de-noiser. Video in the camera window was very smooth. On the other hand, even in good lighting conditions, noise could be seen in the window. And quick movements, such as waving a hand in front of your face, appear blurred in the window. Nevertheless, the video is some of the best that I’ve seen from a webcam.

Built into the camera is an excellent auto focus feature. Some webcams perform that function through software rather than making it a hardware function. The feature allows the camera to focus on an object from four inches to infinity. You can actually hold a business card in front of the lens and the text will be legible. By and large, the auto focus quickly focuses on objects passing in front of the lens.

In addition to auto focus, the webcam uses auto exposure to appropriately calibrate the camera to existing lighting conditions and auto white balance to improve color fidelity within the camera window. It also has an infrared cut filter to block I/R light and improve fabric colors in some lighting conditions.

Microsoft has done an excellent job of combining good features and an attractive price with the LifeCam Cinema. Keyboard jocks ready to upgrade their webcams should definitely “go wide,” and this Microsoft offering is a good way to do it.