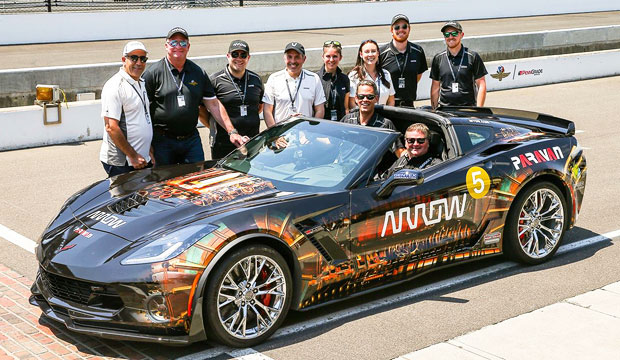 The state of Nevada last week issued paralyzed former Indy driver Sam Schmidt a license to drive a specially made autonomous vehicle, equipped with a series of high-tech sensors and other equipment that will allow him to operate it with head motions, voice commands and breathing techniques.

The license allows Schmidt to operate the Arrow SAM car, a modified Corvette Z06 developed by Arrow Electronics, alongside regular passenger traffic — an important development in the history of the burgeoning autonomous vehicle industry.

“When we think about the opportunities to enable mobility in a safe fashion, autonomous vehicles and semi-autonomous driving are really exciting,” Kelley Blue Book Senior Analyst Rebecca Lindland told TechNewsWorld.

The car, a modified 2014 Corvette C7 Stingray, allows a qualified quadriplegic driver — in this case, Schmidt, who was paralyzed in a car crash more than a decade ago — to control the steering, brakes, and other functions of the car with just the tilt of his head.

Schmidt wears a helmet outfitted with sensors that connect to dash-mounted infrared cameras. He breathes into a sip-and-puff device to control acceleration and braking, and he also exercises control through verbal commands.

Schmidt earlier this year drove the car at 152 mph during a demonstration at the Indy 500.

He showed off his hairpin turning skills with Indy driver Robby Unser at his side at the Broadmoor Pikes Peak International Hill Climb.

The license issued to Schmidt is heavily restricted, according to Nevada officials.

“This isn’t something at this time that anyone with a disability could simply elect to be a part of,” said Alexandra Smith, spokesperson for the Nevada Department of Motor Vehicles.

“The technology is still in development and being closely monitored,” she told TechNewsWorld.

Schmidt is authorized to drive a vehicle with a valid autonomous vehicle testing license issued to Arrow Electronics, only within the state of Nevada, according to Smith. That vehicle must be directly behind a pilot vehicle provided by Arrow Electronics, and a licensed driver provided by the company must be in the car in a position to take over control of Schmidt’s car immediately.

The autonomous vehicle is not permitted to drive in snow or ice, and the vehicle must be driven only on highways the state has designated for autonomous driving.

Nevada has been one of the most progressive states in the U.S> in terms of testing autonomous vehicle technology.

Daimler Chrysler is among the automakers licensed to use the technology in Nevada, and it has been testing commercial trucks, Smith confirmed.

The announcement of Schmidt’s special license comes amid a series of fast-moving advances in the autonomous driving industry. The U.S. Department of Transportation and National Highway Traffic Safety Administration last month announced new guidelines for the autonomous vehicle industry, which are designed to created a level of uniformity across the country in terms of setting up a safety and regulatory framework for the industry.

Uber last month announced the launch of an autonomous vehicle test program in Pittsburgh, which will give officials a chance to see ride-sharing with self-driving Ford Fusion vehicles in real-world conditions, including a wide range of weather conditions, urban congestion, and a variety of terrain types, from cobblestone streets to hills.

An autonomous vehicle went the wrong way down a one-way street near the University of Pittsburgh, according to a news report.

Uber has no record of the incident, spokesperson Chelsea Kohler told TechNewsWorld, and it apparently isn’t clear whether the car in question was in self-driving mode at the time, or if the reported wrong-way driving was a case of human error.