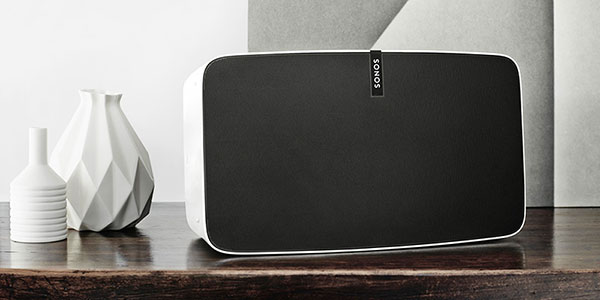 Sonos on Tuesday unveiled a new version of its top-of-the-line Play:5 speaker.

The redesigned speaker includes three mid-woofers and three tweeters, and it can be set up in three orientations: by itself, or paired with another speaker — either vertically for tight sound, or horizontally for a more immersive experience, the company said.

Along with the new speaker, Sonos introduced Trueplay, an application for iPhones and iPads that’s designed to make it easier to tune its wireless speakers to a room’s acoustic profile.

The free iOS app optimizes Sonos’ smart speakers to produce vibrant sound no matter where they’re placed in the home, the company said.

Both the new Play:5 speaker, priced at US$499, and the Trueplay app are scheduled for release later this year.

“The software update we’re pushing out will turn all our Play speakers into better-sounding speakers, ones that are able to hear where they’re asked to be placed in a room and, based on that placement in the room, what is the room doing to the acoustics,” said Sonos spokesperson Eric Nielsen.

“That’s the last mile in great sound in a home,” he told TechNewsWorld. “Through software, we’re able to make all our speakers sound better, to get closer to that idealized curve that our audio and acoustic engineers design the speakers to be at.”

A problem that’s dogged home sound systems is where to position the speakers in a room to get the best sound quality.

Since few homes are acoustically perfect, calibrating speakers for a room typically requires a lot of sweat equity and hardware expense.

The Trueplay app addresses the tuning problem by using the microphone in an iPhone or iPad to analyze a tone the Sonos speaker emits, the company said. That analysis tells the app how sound is being reflected in a room and how a speaker should be calibrated to optimize its performance.

Tuning Without a Receiver

“Trueplay is kind of handy, especially if you’re using one of their surround-sound setups,” said Rob Enderle, principal analyst at the Enderle Group.

“Since the speakers are connected to a home network, calibration can be done automatically,” he told TechNewsWorld. “It’s much more difficult to do with traditional methods.”

With wired speakers, calibration is done with a microphone plugged into a receiver that’s in listening mode. Each speaker emits tones, and the system uses that information to optimize a room’s acoustics.

“That’s problematic with networked speakers because there’s no receiver, so balancing the sound in a room is basically done by your ear,” said Enderle, who is a Sonos user.

“This allows Sonos to do what a receiver would do without a receiver,” he added.

By using the capabilities of Apple’s products, Sonos can calibrate the sound in a room better than it could using other methods, said Ross Rubin, principal analyst at Reticle Research.

“We’re seen stereo receivers come with tools to measure the acoustics in a room, but Trueplay seems to be a more precise way of judging audio quality. The adjustments that it makes seem to be more dramatic,” he told TechNewsWorld.

“That’s important for Sonos, because the Play:5 is going to be used in a broader range of rooms than a typical stereo receiver would be used,” Rubin said. “It’s using the power of ubiquitous sensors, such as the kind embedded in the iPhone, to accurately measure the acoustics of a room and adjust accordingly.”

Too Many Android Variables

While Android users may be disappointed that Trueplay is an iOS-only app, Apple’s control of both its hardware and software platform gives it an edge when designing a tuning app, Sonos’ Nielsen said.

“The microphones in an iOS device are a known quantity,” he explained. “We know how they perform, so we know how sound is reacting in the room.”

On the other hand, Android devices are made by a number of manufacturers, which means the characteristics of the microphones in the devices are variable, Nielsen said. “That makes it more difficult to nail down that acoustic variable needed to tune our speakers.”