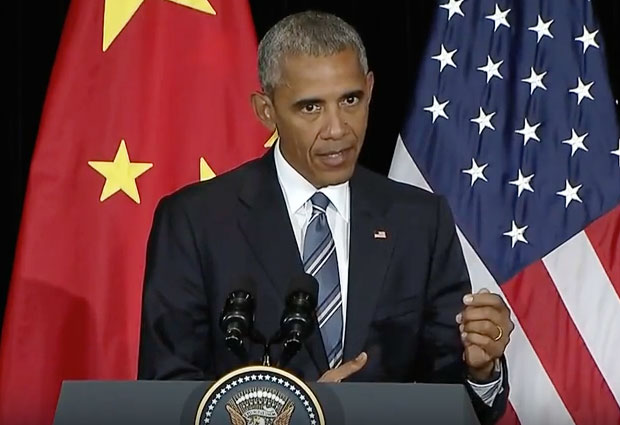 The U.S. has more offensive and defensive capability than any other country on Earth, Obama noted.

Citing a new era of significant cyberwarfare capabilities, the president urged moving into a space where leaders begin to institute some norms to prevent global escalation from spinning out of control.

“We’re going to have enough problems in the cyberspace with non-state actors who are engaging in theft and using the Internet for all kinds of illicit practices, and protecting our critical infrastructure, and making sure our financial systems are sound,” Obama said, “and what we cannot do is have a situation where this becomes the Wild, Wild West, where countries that have significant cybercapacity start engaging in competition — unhealthy competition or conflict through these means when, I think wisely, we’ve put in place some norms when it comes to using other weapons.”

Tensions recently have been building in U.S. relations with Russia, which is suspected of involvement in a recent series of cyberattacks against the Democratic National Committee, the Hillary Clinton presidential campaign, and agencies of the U.S. government.

Several of those attacks resulted in leaks to the Wikileaks, which published stolen information online. The Clinton campaign has suggested that Russia may be trying to undermine the presidential election, possibly to benefit Republican candidate Donald Trump.

The concerns about foreign entities influencing the U.S. presidential election grew with recent reports that hackers breached voting systems in Illinois and Arizona. Personal information of thousands of Illinois voters was compromised.

A known Russian hacker is suspected of using malware to compromise credentials of a county user in order to access the statewide voting registration system, Matt Roberts, a spokesperson for the Arizona Secretary of State’s office confirmed last week.

Officials at the Russian Embassy to the United States did not respond to new inquiries, but they previously dismissed allegations that the Kremlin had any link to cyberattacks on the DNC or U.S. government agencies.

An escalation in cyberwarfare is a far different dynamic than an actual arms race, because in a cyberscenario there is no way to really know the full capabilities of an adversary, cautioned Martin Libicki, an adjunct management scientist at RAND and distinguished visiting professor at the U.S. Naval Academy.

“To some extent, countries keep their best stuff under wraps against the day when they might have to use it,” he told TechNewsWorld. “Conversely, the whole point of having a nuclear deterrent is to scare people — and people cannot be scared by what they don’t know about.”

In terms of the potential for Russia influencing the U.S. election, which is a growing fear, the threat is relatively limited, Libicki added, as different states have different methods of voting, and fully electronic voting is the exception rather than the rule.