Roxxxy Sexbot: It’s Not Her Looks, It’s Her Personalities

The real world has finally caught up with the concept of a sex robot, something that’s been immortalized in films ranging from “Westworld” to “A.I.” and the fembots of “Austin Powers.” And where else but the 2010 Adult Entertainment Expo in Las Vegas would that vision be realized in the five-foot-seven, 120-pound, lingerie-clad form of Roxxxy? 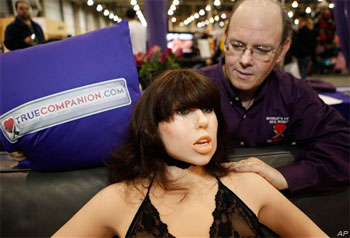 True Companion, a New Jersey-based company, took the wraps off of Roxxxy in Vegas over the weekend, touting her as “the world’s first sex robot.” She’s anatomically correct and has skin that feels real to the touch, but she doesn’t move. Then again, she may not have to; Roxxxy’s claim to fame is her embedded, customizable artificial intelligence, which gives her up to five “personalities” and the ability to interact with whomever buys her.

As it states on the TrueCompanion.com Web site, “Our caring staff deliver to you the specific sex robot which best meets your specific requirements. Your TrueCompanion.com robot will deliver the ultimate in robot sex. She will also be able to talk, listen, carry on a conversation, feel your touch and be your true friend. She can also have an orgasm when you touch her!”

The Five Faces of Roxxxy

Roxxxy is a downloadable sexbot, a WiFi-enabled wanton woman who may single-handedly redefine the phrase “hot spot;” her software can be upgraded via wireless connection and her “personalities” can be swapped among users for a monthly subscription fee. And those personalities? They range from the demure “Frigid Farrah” to she’ll-try-anything “Wild Wendy” to the wiser, experienced “Mature Martha.”

As you can guess by now, Roxxxy can’t even be accurately classified as version 2.0 of the typical blow-up sex doll. She’s a blend of robotics, engineering, computer science and cosmetics, and she represents both positive and negative advancements for the field of robotics, according to Yoky Matsuoka with the University of Washington.

“I would love to see more AI (artificial intelligence) in toys, and we’re making great headway with kids’ toys, so why not for adult toys?” Matsuoka told TechNewsWorld. Regarding Roxxxy’s designer, former Bell Labs engineer Douglas Hines: “The kinds of thing’s he’s doing now, it doesn’t feel like he’s putting in cutting-edge AI, but it’s a good thing that he’s getting the press for the field of AI, so maybe this will help the field in the future.”

Yet there is always a downside to a development like this, which skirts marketing and pop culture as much as robot manufacturing. “Robotics and engineering have both been hyped like crazy in the past, whether it was ‘Star Wars’ in the ’70s or ‘Robocop.’ The media start to expect and assume things that are going on in the field.”

True Companion did not respond to TechNewsWorld’s requests for an interview, but the company Web site gives a sobering backstory to Roxxxy’s creation. Hines initially wanted to honor the memory of a friend who had died at the World Trade Center on Sept. 11. He envisioned a robot that could be outfitted with that friend’s personality and preferences. “After test marketing, the concept changed in order to capitalize on the enormous adult entertainment industry,” states a message on the site.

Roxxxy could indeed represent a step toward more serious-minded applications for AI, said Matsuoka, a MacArthur Grant-winning professor in UW’s computer science and engineering department and a pioneer in the field of “neurobotics.” For one thing, some of the technologies involved could contribute to creating companions for the elderly and autistic children. “For some reason, [autistic] kids respond to robots but not to humans. We’re trying to understand what it is about the robot that makes it easy to respond to. This is all very closely related.”

If the adult entertainment industry helps in some way to advance the field, so be it, said Matsuoka. “These days, with data mining and the ability to personalize toys, those things are becoming far more sophisticated, and all of that could be implemented in adult toys.

“People who are into these things, and to have a personality that’s downloadable for whoever has this hardware — they can browse around and find the ‘girls’ they like, and can enjoy that person. That’s very much in the social networking realm.”