Social networking began as a fascination of the young on college campuses, but it has grown to embrace all age groups all over the world. It’s a phenomenon with a potential that’s barely been scratched, especially in business. Barry Libert, though, would like to see that change, and he’s ready to show companies how to do it. 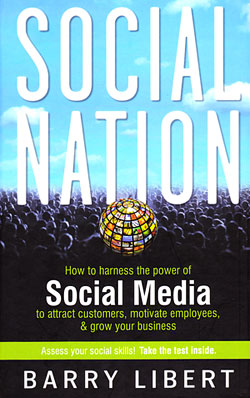 Libert is the author of Social Nation, a book with a subtitle that describes what it’s about in a nutshell: How to Harness the Power of Social Media to Attract Customers, Motivate Employees and Grow Your Business.

Social Nation (US$24.95, paper; $11.99 electronic), published by Wiley, grew out of a pet peeve of Libert. He, like many business leaders today, grew up in an era when top-down relationships were king. Children were taught to be seen and not heard. Teachers taught; students listened.

That attitude has been transferred to the way many companies treat their customers, too, he contends. They avoid customer contact through automated phone systems, he notes, and they shout at them with their marketing.

“[T]hey broadcast what they have to sell the old-fashioned way, by bombarding us with their newest campaigns on TV, radio and in print, rather than engaging us in a two-way conversation,” he writes. “Clearly, if organizations thought about us as friends and followers, let alone fans, this is not the way they would conduct themselves.”

That kind of top-down approach to business is changing, Libert maintains. That’s because social networking is changing the attitudes of everyone who connects to a business — its employees, its customers, its vendors.

“For the past 200 years (starting with the Industrial Revolution) making business nonsocial was what organizations were all about,” he writes. “Businesses weren’t looking to create social communications with constituents at a personal or individual level. In fact, business was about making money at any and all costs, while dehumanizing the personal elements of our daily lives.

“But all that is changing,” he asserts. “Your employees and your customers want to be engaged on a very personal level, and not just through a yearly survey or at an annual conference.”

Libert–who is chairman and CEO of Waltham, Mass.-based Mzinga (the Swahili word for beehive) — a sort of one-stop shop for business social software and services — identifies four trends taking the “non” out of non-social business organizations.

One of those trends is that the workforce is changing, with women nearly outnumbering men. “Women have always been the connectors, the relaters, and the conversation drivers,” Libert writes — all qualities supporting incubation of a social workplace.

Another trend is the growth of open business models. Crowdsourcing — where large numbers of people who don’t work for a company provide input used to design and market its products — is gaining street cred with companies.

A third trend is that technology has allowed social networking to spread. It has allowed people to connect with each other on their own terms, and it has led people to have those same expectations when businesses try to connect to them.

And the fourth trend is the increased gathering of “social intelligence” — the metrics, gathered from social activity, that enable a business to create products that connect with their customers on an emotional and social level.

Form Your Own Social Nation

Once Libert sets the stage for his social networking theories, he offers a set of principles for turning a business into a Social Nation.

As Libert lays down his principles for forming a Social Nation, he illustrates how they’re working in companies like Avon, Zappos, Ducati, PepsiCo and Apple.

Peek Into the Future

In addition to his principles, Libert offers some useful advice on how to get a Social Nation up and running. They include delivering customer support through your community, building your brand through your fans and followers and developing products through others, not only others outside your company but those within your company who may be outside the product development silo.

Libert also includes a valuable section on what to avoid when building a Social Nation — such as running it as a traditional business and underinvesting in social initiatives and abandoning them too soon.

Social Nation is written in a clean style and is broken into easy to digest chunks. It even has photos to make the copy less imposing. While the book is written for business owners, its analysis of how social networking can work in a business ecosystem will be fascinating to anyone who has an interest in how the successful business of the future will operate.