“A more robust entertainment delivery system will be a hallmark of Sony as we move into the future,” Sony CEO Kaz Hirai said Tuesday in a keynote address at the Consumer Electronics Show in Las Vegas.”We will be offering customers a single source of entertainment that is less complicated, more cost-effective and more accessible than ever before.”

Sony will be taking bold steps with its future consumer electronics products, Hirai pledged, adding that he is dedicated to creating a Sony culture that will evolve and mature over time to deliver products with emotional value.

Future Sony products will be free of the constraints of today’s consumer electronics products, Hirai said.

“In looking forward … our desire is to break out of the confinements of physical places or even primary devices as the only points of access [to entertainment],” he said.

“The conventional boundaries are being transformed, if not vanishing altogether,” Hirai observed. “Sony will be releasing products in the very near future that will create an entirely new concept of consumer electronics.”

One of the first products in this line of concept-changing products is an ultra short-throw projector capable of casting a 147-inch 4K image on any wall in a home. The device is expected to be available in the United States this summer. 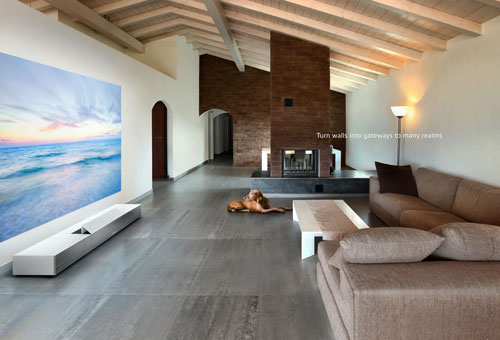 “This is only the first step on the way to a new reality,” Hirai said, “one in which … you are able to control content in entirely new ways.”

Another Life Space product in the works is a table top screen that projects high-quality information on any flat or convex surface that can be controlled by your fingertips. The device could turn a dining room table into a giant touchscreen where video chats could be conducted, vacations mapped, or images shared by sliding them across the table.

“This technology brings content to the center of the household, untethered by devices,” Hirai said.

Sony has fallen on hard times recently — it posted losses in its most recent financial quarter, as well as reducing its earnings forecast for its fiscal year — but Hirai’s keynote illustrated the company’s willingness to embrace big ideas to regain its prominence in consumer electronics.

“Sony is willing to take some risks, and that’s what it’s going to take to be a leader in consumer electronics,” Jordan Selburn, a principal analyst with IHS iSuppli, told TechNewsWorld.

“The cycle of CE products is they’re innovative, then they become commoditized. For a number of years, Sony has been trapped in the commodity space,” Selburn explained.

“So they need to step up — they need to do more than just be one of three or four companies coming out with 4K TVs,” he added.

Sony’s vision of the borderless entertainment environment won’t be for everyone — at least not initially.

“There is a group of consumers we call digital natives — they’re the youngest consumers that grew up in a world of Internet access and smartphones — that would love to pay for an immersive experience,” Brett L. Sappington, director of research for Parks Associates, told TechNewsWorld.

“That won’t be that way forever,” Sappington said, “but for younger consumers, an immersive experience is really something they crave.”

Immersive experiences and the interfaces that go with them aren’t most consumers’ cup of tea, however.

“Hand gestures [and] voice control are neat technologies, but history has shown that consumer uptake for them is pretty limited for those technologies,” Sappington said.

If Sony is to realize its vision for turning an entire home into an entertainment center, it will have to avoid the pitfalls that stymied others with similar visions in the past.

“Cisco tried to go into this five or six years ago, and they fell flat on their face because the stuff was too hard to use,” Rob Enderle, principal analyst of the Enderle Group, told TechNewsWorld. “Making it easy to use and affordable have been two big problems.”