The Asus EeeTop: A Nettop in Search of a Mission

The Asus EeeTop ET1602 is an interesting computer with some potentialfor home and business use. However, it will surely cause considerablediscussion over what users might really do with it.

The ET1602 is essentially a netbook-like computer with a 14-inch by8-inch LCD touchscreen wrapped around it. With an overall unitmeasurement of 16 X 11.5 inches, it’s in some ways a fully functionalcomputer, and in others it’s more reminiscent of a wireless PDA fromyesteryear. 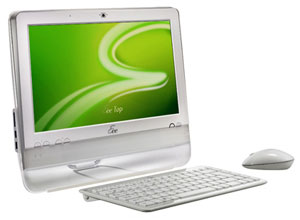 Sure, you can attach the included 12.5-by-5.5-inch keyboard (sanskeypad) and mouse to it and have a nifty portable computer sporting a non-clamshell design. Or you can move it around from room to room with itsbuilt-in handle attached to the back. Leave the mouse and keyboardbehind, and use your finger and a virtual on-screen keyboard for input instead — butwhat else can you do with it?

Heck, my several-year-old HP widescreen laptop has the same-sized LCDscreen and a bigger keyboard. Plus, it has a built-in optical drive(the ET1602 does not come with an external drive) and a more spacioushard drive. So what is to gain? The new Atom N270 + 945 GSE processorin the Asus pales in performance to the aging AMD Turion64 mobileprocessor in my laptop.

Still, the Top conveniently plays audio and video selections onany tabletop or wall, and serves nicely as a digital photo presenter.The EeeTop also can be a nifty way to provide presentations at meetings.Just wherever you put it, make sure a power supply is nearby, as Asusdoes not consider the EeeTop to be a fully portable computer — it lacks a built-inbattery.

Perhaps the EeeTop is a device that paves the way for the future ofcomputing. This device is easy to lug around at barely 10 lbs., and itis convenient to reach over and enter notes and quick emails andperform other computing tasks just by touching the screen.

If Asus can upgrade the Windows XP operating system (OS) to run WindowsVista or even Windows 7, the EeeTop might have some staying power.Windows XP’s days are numbered as Microsoft shuts down its long-termsupport. Few alternatives to running an out-of-date OSon this unit may exist.

My hopes for running Linux on the Top were dashed. When I usedan external DVD drive to run a Ubuntu Linux Live CD session on theEeeTop, the effort failed. The video system just would not work beyondproducing a black screen and a badly disconfigured rainbow array whenI tried to jump-start the configuration using Generic settings.

The Top also failed to handle Linux via booting asession of Puppy Linux from the CD and USB drives. Except for two very old and underpoweredvintage laptops, I have never not been able to get Puppy Linux to runon any computer.

I suppose the concept behind the all-in-one EeeTop computer is to solvethe shortcomings of tiny netbooks with their puny keyboards andeye-straining screens. Once I disconnected the EeeTop’s keyboard andmouse and truly got into touchscreen computing, I recognized thenovelty of the computer and wished the virtual keyboard and SoftStylusfeatures came with my netbook.

Typing on the virtual keyboard and scratching letters in theSoftStylus writing window was actually fun. The letters from theSoftStylus pad instantly appeared on the document page. Fun as they were, however, the acts of typing onthe virtual keyboard and trying to write legibly on the SoftStylus padwere both also awkward. It takes practice to do either productively.Obviously, any large data-entry jobs will still require the physicalkeyboard.

Using my finger, I often smudged the screen and pressed twoadjacent keys. The letter-recognition software is much moreaccurate than the earlier versions of this technology that I once used on a PDA. Still, my sloppypenmanship was my nemesis here, as it always has been in writingscript.

I resorted to using a stylus from an out-of-use PDA. For some reason,Asus does not include a stylus with the EeeTop. The company does,however, include a spot to store one on the back of the unit.

Also built in is a 1.3 megapixel webcam and a microphone. Located on the center of the lower front panel,the speakers approach the quality of a high-end monitor with built-in speakersrather than the hollow sounds coming from most laptop computers andnetbooks.

The back of the unit sports four USB ports, an Ethernet jack, a DCIMport and audio in/out jacks, as well as DC power input and a lock slot.Two more USB ports and the card reader on the left side. The cardreader handles MMC, SD, Memory Stick andMemory Stick Pro storage media, but not the XD cards my digital camerauses.

Wireless 802.11n support is built in. Volume and brightness controlsare easy to reach on the lower left side under the screen. That isalso where the indicator lights for wireless connection and CPUactivity are located.

Much like some netbook installations, the EeeTop has an Easy Mode alongwith the standard Windows XP interface. Easy Mode displays four largecategory icons for Communication, Fun, Work and Tools in a menu bar atthe top of the screen. Touching or clicking each icon opens rows oficons that fill the screen for program choices to run.

The bottom of the screen shows the typical Windows XP start menu.Touch anywhere on the screen to have the Eee Bar icon appear. Tap itto see it extend across the screen just above the Windows menu bar.Here is where you find one-touch access to the special programfeatures that drive the EeeTop.

A house icon at the far right of the menu bar that sits at the top ofthe screen minimizes the menu bar to the Windows system bar at thebottom of the screen. I like this arrangement. It allows both noviceand experienced computer users to switch seamlessly between both viewson the same desktop.

The Top is definitely not a computer to buy for high-performance or high-endgaming. The Intel GMA 950 just does not cut it enough to play many ofthe videos I clicked on while surfing the Web. However, this is the samefault I find with the Atom processor in other netbook products runningboth Windows XP and Linux operating systems.

It is whisper quiet — I’m still not sure there a fan inside. Overall,the touch-optimized software applications work exceedingly well.

I discovered that the more I played with the Asus EeeTop, the morecomfortable I became using it. No doubt this model would be a nicediversion from my other more traditional boxes, but I doubt it couldever become my first choice for consistent work tasks.

One of the EeeTop’s neatest apps is the virtual notepad. Users can writemessages and reminder notes with their fingers and post them right onthe desktop like a traditional sticky-note.

The EeeTop’s price range of US$480 to $519 makes it the same kind oftempting choice as deciding whether to buy a netbook over a morecostly desktop or notebook computer.