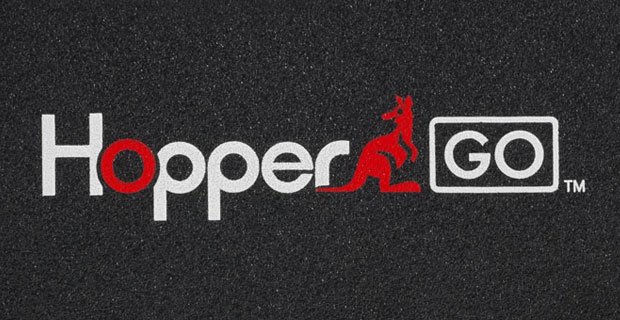 The company made location-shifting as easy as time-shifting via its Sling technology, which allowed viewers to stream content from their home set-top boxes via the Internet to remote PCs and mobile devices. The option to catch up on favorite shows remotely means TV junkies need not stress out during business trips and can truly relax on vacation.

Dish’s Hopper let users transfer recordings to a mobile device, which has allowed for offline viewing of content — something road warriors and other frequent travelers can appreciate.

Now the company has introduced yet another option for taking recorded content just about anywhere: the Dish HopperGO, a compact DVR hard disk drive that allows users to transfer content from a Dish Hopper 2 or Hopper 3 set-top box to the portable unit.

Available now for US$99, the 64-GB, rechargeable-battery-powered gizmo let users bring along up to 100 hours of recorded TV shows and movies.

The first thing to note about the HopperGO is its small size. Dish has made a name for itself with its Sling technology and its prime-time-anytime functionality, but the company should earn kudos for its ability to shrink down its products. Dish’s Joey extenders are small enough not to be intrusive near secondary TV sets, and the HopperGO is sleek enough that most folks won’t complain about taking it with them.

If anything, it is so small — measuring just 2.5 x 2.5 x .5 inches — that it easily could be misplaced. It is an ber-small HDD/DVR — and it makes me feel old for remembering the days of bulky 100-MB portable music players!

While the HopperGO has the same signature black and red casing as Dish’s other products, it is distinctive not only for its size but because there are just two USB ports — a micro input and mini output — along with two indicator lights to alert users to the fact that it is connected and charging. It is a clean and simple design.

The HopperGO is designed to connect directly to the Hopper’s front USB port, which until now really hasn’t served much of a purpose. Clearly, Dish not only future-proofed its set-top box, it had a vision of what it might do next in the portable video space.

As soon as the unit is connected, a prompt comes up to alert you that the HopperGO can be controlled via a mobile device running the Dish Anywhere app. That could be the weakest point with this type of recording product, as a mobile device is required not only to control the HopperGO, but also to watch recorded content.

No doubt because of content and licensing deals, the HopperGO — despite having that USB output — can’t be used to connect to external monitors or TV displays.

That’s a shame, because it would be amazing to move content to the HopperGO, take it across the country or the world, and plug it into a USB-compatible HDTV to watch it.

The other issue is that to ensure that the 64 GB of storage can accommodate 100 hours of content, the video is compressed and optimized for both transfer and playback, reducing the resolution. A tablet and phone won’t need the same picture quality as, say, a 50-inch 1080p TV, so it does make sense in practice.

At any rate, a mobile device — iOS and Android smartphones and tablets, as well as Kindle tablets — is required to transfer recorded programs from the Hopper to the HopperGO. There is no direct transfer control from the Hopper set-top box, but it would be great if Dish added that functionality. That would reduce reliance on a home network — one of the issues the HopperGO is meant to resolve.

The question then might be, what purpose does the portable HopperGO provide if a tablet or smartphone is still needed? In a nutshell, the HopperGO is about space saving. Its 64-GB HDD is large enough to store 100 hours of HD content, and few mobile smartphones or tablets have the space for that much content. That enables users to transfer their recorders to the HopperGO and save the space on their devices.

Content can be viewed remotely via the HopperGO’s ad hoc WiFi, which it broadcasts for just that purpose. It can support simultaneous viewing of different programs on up to five mobile devices via the Dish Anywhere app and is capable of up to four hours of streaming on a single charge, but fortunately the HopperGO can be used while charging. As a result, the HopperGO can be a hub for streaming of content for the whole family on the go.

That makes it an alternative to using less-reliable hotel WiFi, which has been the Sling technology’s weakest link. If the connection is spotty, the system breaks down all too quickly. This resolves that problem quite reasonably.

In testing, I found the unit performed far better than streaming, even over my home’s own WiFi system. No doubt that was because the HopperGO’s network was optimized for one thing and one thing only, and the files transferred to the HopperGO are optimized for quick streaming for mobile devices, Dish’s product managers explained.

However, the fact that a tablet was needed as the control was a bit frustrating because it meant I needed to utilize my home’s WiFi and take up bandwidth. That could be a concern if I wanted to stream live TV from, say, Netflix or Amazon Prime Video at the same time.

The other notable complaint is that it is still about the content on the DVR, and anything that airs after I leave my house would be available only via Sling streaming devices or computer. It isn’t possible to connect the HopperGO to the Hopper in my living room if I’m on the other side of the country, but I would have to consider planning to save shows to be watched later. I suppose I could load up on shows and take with me the ones I haven’t gotten around to viewing.

For those who travel often, return home briefly and hit the road again, it’s an excellent solution as well. It is also ideal for people who go away for the weekend and want to use that time to catch up on shows. In those cases, the HopperGO is as much a game changer as the DVR was 15-plus years ago.

As a portable device for viewing recorded content, the HopperGO does everything as promised. It is best seen as a companion tool for the Dish Anywhere app, and it’s ideal for those times when a reliable WiFi signal isn’t available.

It is small enough that it won’t break your back to carry it along, has a battery life that is acceptable for short periods without recharging, and has a capacity that should exceed anyone’s requirements for reasonably long trips. If you’re on vacation and watch more than 100 hours of TV on a tablet, you might as well stay home!