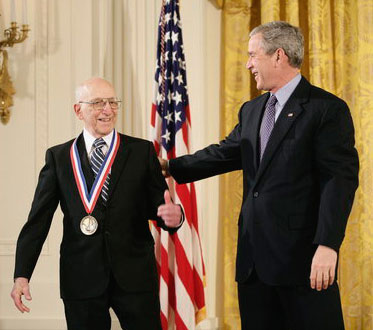 Baer, who was Jewish, emigrated with his family from Germany to the United States prior to World War II. During the war, he served in a military intelligence unit at the U.S. Army headquarters in London.

While working as a military contractor for Sanders Associates in the ’60s, Baer began to explore the possibility of creating a video game system that could be played on the television. The result of his work was the “Brown Box,” a prototype created in 1968, which eventually led to the Magnavox Odyssey, considered the first true home gaming console.

Even today, Baer’s influence on gaming can be seen.

One element “that seemed to survive him was the concept of keeping games simple,” said Rob Enderle, principal analyst at the Enderle Group.

“Angry Birds likely had Pong as a distant linear ancestor,” he told TechNewsWorld.

“As he moved to the light gun, which was pretty amazing for its time, he started us on a path to virtual reality by connecting the gamer to a virtual world that increasingly mimicked the real one,” Enderle observed.

“Often the best VR tests with Oculus Rift are with gun mockups,” he noted, “and the Wii has embraced the concept that game controllers should look more like what they emulate better than most, tracing back to Ralph’s concepts.”

When it was released in 1972 under license to Magnavox, the Odyssey sold 130,000 units, making it a small hit. From that humble beginning, the video game industry was born.

Baer’s rather simple system connected the device directly to the TV. The Odyssey was built around just 40 transistors and 40 diodes, but it had no software. Instead it worked with a set of electric program cards, each of which supported a different game, as well as plastic overlays that clung to the screen to add color to the action.

While it might seem primitive today, it should be noted that the Odyssey arrived in the home even as Pong made its debut in arcades.

“A lot of people credit Nolan Bushnell, of Pong and Atari fame, for founding the video game industry, but they often forget that Baer’s baby, the Magnavox Odyssey — the first TV-based home console — debuted alongside the Pong coin-op cabinet in 1972,” said Lewis Ward, research director for gaming at IDC.

Thus there is no denying that Baer deserves his spot as the father of video games.

“He was the first to convince people to make a video game system for the TV and also managed to get a TV maker to produce it,” said independent video game analyst Billy Pidgeon.

“It was really proof that it could be done,” he told TechNewsWorld.

“Regardless of how well it did compared to later systems, it was the beginning, absolutely,” Pidgeon said. “He is someone that people outside the industry might not appreciate as much as people in the industry — but fortunately, he’s been recognized as a pioneer in the industry and in technology.”

Baer in 2006 received the Medal of Technology from President George W. Bush. He was inducted into the National Inventors Hall of Fame in 2010, and his Brown Box prototype is on display at the Smithsonian Institution in Washington, D.C.

More Than the Father of Gaming

Were it not for the Odyssey, the video game industry might not be where it is today.

The Odyssey prevailed in some major court cases, beginning with a lawsuit brought by Sanders and Magnavox against Atari for creating Pong.

Atari settled by paying US$700,000 and in the process became Odyssey’s second licensee. It was to be the last. Over the next two decades, Magnavox sued more than a dozen companies and won more than $100 million in infringement suits.

As for Baer, “what a character, what a life,” Ward told TechNewsWorld.

“Since video games are a form of entertainment, the technology behind it is often trivialized. The life of Ralph Baer makes clear that the fundamental innovations that gave way to video games are literally derived from rocket science,” he pointed out.

“As gamers fire up Call of Duty: Advanced Warfare this holiday season, they should take a moment to salute an actual veteran, Ralph Baer,” Ward added. He was “a true gaming industry pioneer and a man whose legacy will positively affect millions of people’s lives for decades to come.”