Visions of a Future Chock-Full of Chips

Twenty years from now, semiconductor chips will cost a penny apiece and will be in everything — our clothing, our sunglasses, our contact lenses and even our toilets — physicist Michio Kaku told an audience Thursday at the RSA 2011 convention.

They’ll revolutionize warfare, manufacturing and the medical field, said Kaku, one of the co-founders of string field theory.

Kaku’s talk was based on interviews he conducted with 300 of the world’s top scientists about their views of the future. Those interviews have been published in his latest book, Physics of the Future: How Science Will Shape Human Destiny and Our Daily Lives by the Year 2100.

This Is Number Four

Extrapolating this curve out into the future, some computer chips will eventually cost about a penny apiece, Kaku stated. “There will be millions scattered in our clothing, in the environment.”

When computer chip prices fall to about a penny, chips will be ubiquitous. They’ll be present in our clothing and in our eyeglasses, Kaku remarked.

Embedded chips will give our eyeglasses access to the Internet on the fly, Kaku predicted. Eyeglasses will then double as their owners’ home offices or entertainment centers.

“In 10 years, we’ll live in a world where we can identify people’s faces, see their biographies, see subtitles as they speak in other languages and, if you’re an artist, you’ll be able to create any sculpture by waving your hands and see it develop,” Kaku said.

The Technology of War

The United States military is using a version of smart glasses called “Land Warrior,” which Kaku saw at demonstrated at Fort Benning. “It’s the Internet of the battlefield — you’ll see friendly troops, enemy troops, everything on your glasses,” he told his audience.

Augmented reality will be used to enhance the capability of smart glasses. “You’ve seen this before in the movies,” Kaku said, showing a slide from the film “The Terminator.”

The Chinese already have created an augmented reality version of the Summer Palace in Beijing, Kaku stated.

The U.S. Department of Defense began investing in augmented technology back in 2007.

One company, Tanagram, has worked on a DARPA project involving an augmented reality interface for F-35 fighter jets.

Two other companies announced products including augmented reality at the Mobile World Congress, being held in Barcelona, Spain.

Route 66 unveiled a new app for Android earlier this week that incorporates augmented reality. Meanwhile, Travel site TripAdvisor announced Thursday at MWC that it has added a virtual tours feature that uses augmented reality to its iPad app.

More Uses for the Ubiquitous Chip

Paper will be electronic, using organic LED (OLED) technology. “Your cellphone will scroll out paper which can be totally flexible,” Kaku said.

The wallpaper of the future will be both flexible and intelligent, and it will consist of hundreds of computers on the wall. “When you want to redecorate your house, you talk to the walls and they’ll change to whatever color you want,” Kaku said.

Office files will follow people around in the cloud as they move from room to room, or between the home and office, Kaku forecast.

“Today your office is structured around your PC,” Kaku said. “Why? The content is more important than your platform.”

Cars of the future will drive themselves, Kaku said. “Google is already investing millions of dollars into this technology and predicts that, in eight or nine years, your car will drive itself,” he pointed out. 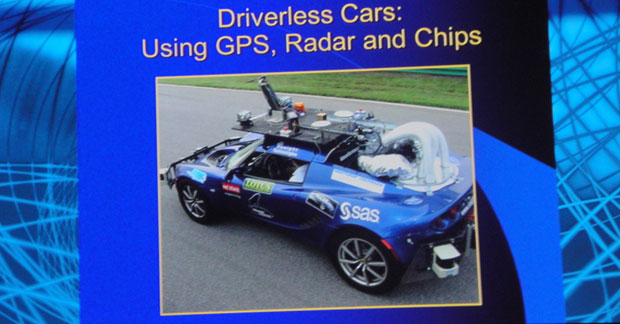 Cars of the future will drive themselves, Michio Kaku stated. The research is already being undertaken.

Google, however, isn’t hold too tightly to that time frame.

“We aren’t going to put a hard number on when the car will be available on the road,” Google spokesperson Jay Nancarrow told TechNewsWorld.

“The technology has made a lot of progress, but there are a lot of other external factors involved with putting cars on the road that make it more difficult to give an estimate,” he explained. “The team is hard at work on some of the toughest computer science challenges in their field.”

The ubiquity of chips will lead to mass customization, Kaku forecast.

For example, consumers will be able to walk into a store, select an item of clothing they want, and send a message to the manufacturer, who will create that item tailored exactly to them, Kaku said.

“That’s what Dell’s doing,” Sorofman elaborated. “They’ve outsourced manufacturing and they’re just assemblers who configure their products to suit market needs. We see that at Ikea as well.”

All medicine will be reduced to computer science, Kaku said.

“When Isaac Asimov did this in the movie ‘Fantastic Voyage,’ people laughed,” Kaku elaborated. “In the future we’ll do this. We’ve already done this with nanoparticles.”

The California Institute of Technology has developed nanoparticles that can home in and destroy individual cancer cells, Kaku said. These have been up to 80 percent effective in trials.

Smart toilets will help eliminate cancer, Kaku suggested. “Your toilet will have DNA chips which can zoom in on individual cancer cells and can tell you if you have cancer,” he explained. “It will tell you that there are 100 cancer cells in a colony in your body 10 years before that forms into a tumor.”