Where Are the Robots Taking Us? Part 1

Robots haunt our art and our dreams. Science-fiction author Isaac Asimov wrote a whole series of novels around the idea of robotics — the “Robot” series, one of which was made into the movie “I, Robot.” The “Terminator” movies were all big hits, and science-fiction series such as Britain’s “Dr. Who” and America’s own “Caprica” and “Battlestar Galactica” all have robots, more or less humanoid, in their casts.

On television, the Japanese cartoon characters “Astro Boy,” as well as “Transformers” and “Gundam” have been hits.

While we’re all familiar with the news clip shots of robotic arms in auto assembly plants, researchers are increasingly focusing on robots for personal and social uses such as in daycare centers or as pets, and that’s what this article will explore.

Why are we so fascinated with robots? Do we want impersonal slaves that don’t talk back? Are robots the culmination of the vision of freeing humanity from drudge work? Will robots be cost-effective?

Why are the Japanese so interested in humanoid robots and robot toys? Is it because their population is declining so they’re running out of human caregivers and older people don’t have the time and energy to feed and groom pets and take them for walks? What about Westerners?

What are the legal implications of using humanoid robots or robot pets? If they go awry or don’t perform as expected, can their owners sue the manufacturers? What protection will manufacturers need from frivolous lawsuits?

The market for caregiver robots is potentially huge. The Japan Robot Association predicts the market for consumer robotics will top US$66 billion by 2025. Patrick Cox, editor of the “Breakthrough Technology Alert” newsletter, thinks that number could be even bigger.

The United States’ market for elder care personal robots will hit $74 billion in 2011 and $86.6 billion in 2015, according to Martin Spencer, president and CEO of U.S. robot manufacturer GeckoSystems.

GeckoSystems’ products include an elder care personal robot and a medical care robot that supplements nurses’ services and can change bedpans, give patients their medication and monitor their vital signs.

“Robots that are affordable companions and operate largely independent of the owner could be a huge initial benefit to people who are disabled,” Rob Enderle, principal analyst of the Enderle Group, pointed out. “This may turn out to be one of the biggest things this century, much as affordable cars and affordable computers were in the last century,” he told TechNewsWorld.

The Japanese have long had robot pet dogs and humanoid robots, and they are investing heavily in robotics to take over mundane chores as they grapple with the problem of an aging population.

“In an effort to address two ongoing problems facing Japanese society, namely the aging of Japanese society and recurrent natural disasters, the Japanese government is hoping to adapt and enhance the country’s robotics expertise by developing anthropomorphic robots to assist humans in these situations and others,” reads a paper published by the Asian Technology Information Program.

Under the Ministry of Economy, Trade and Industry’s auspices, Japan launched a Humanoid Robotics Project in 1998 that had two objectives. One was developing a common robot technology platform, and the other was application of this platform to human assistance tasks. 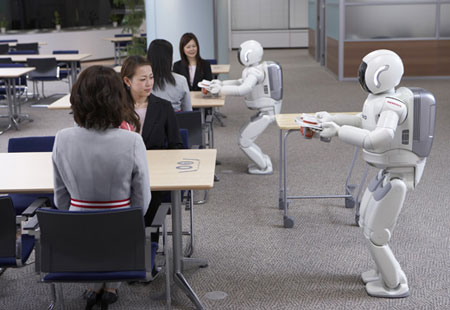 Since then, Japanese companies have unveiled a large number of humanoid and pet robots. In 2007, Honda rolled out two humanoid “ASIMO” robots to serve visitors to its headquarters. ASIMO has been a Honda project since the ’80s.

Sony came up with the “QRIO” walking robot which it programmed to dance. 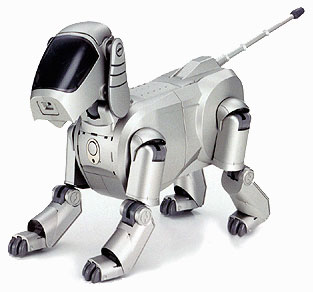 In February, Fujisoft released the “Palro” robotic humanoid, which can converse with humans spontaneously. This has an open software platform that comes with various apps which let it perform different functions.

Me and My Robot

Some people get emotionally attached to their robots. During a panel discussion at Stanford University’s School of Law on the legal challenges surrounding robotics, Paul Saffo, a technology forecaster and visiting scholar, said some owners of the Roomba robotic vacuum cleaner take the devices on vacation and treat them like friends or family members.

Soldiers in Iraq and Afghanistan have reportedly developed such strong bonds with their bomb detector robots that some of them have risked their lives to protect the robots from enemy fire.

What legal issues would arise if someone bonded with a robot and it “died?” With the U.S. being such a litigious society, might the owner sue the manufacturer? If the owner does file suit, what might happen?

Perhaps a lawsuit might be filed, but the outcome would be difficult to predict, Ryan Calo, a residential fellow at the Stanford Law School Center for Internet and Society, told TechNewsWorld. “Sometimes the law compensates people for psychological trauma or mere belief; at other times, it may turn a deaf ear,” Calo pointed out.

Perhaps a case might be made for emotional distress and loss of services when a personal robot goes to the great robot factory in the sky, but chances are we’ll have to wait until someone actually files suit over the issue to find out.

Where Are the Robots Taking Us, Part 2