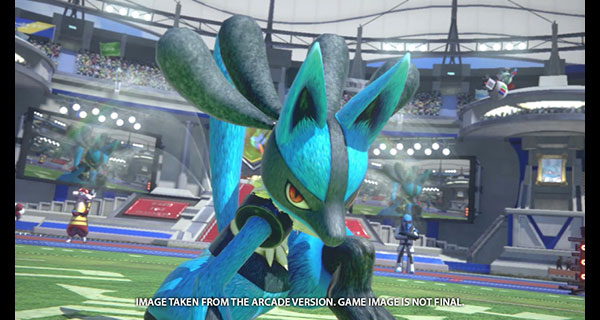 Nintendo and The Pokemon Company last week announced that Pokken Tournament — the Pokemon fighting game developed by Namco Bandai — will expand from arcades in Japan to a worldwide launch on the Wii U in the spring of 2016.

Pokken Tournament gives players complete control over their Pokemon. Instead of just issuing commands to use special attacks, players of the fighting game can direct the blows their Pokemon deliver.

Although Namco Bandai’s role as developer may imply game play characteristic of titles like Soul Caliber and Tekken, Pokken Tournament is for Pokemon fans first — and the fighting game formula takes a back seat to that, emphasized Namco Bandai’s Katsuhiro Harada, producer of the game.

Pokken Tournament brings together an “authentic Pokemon experience,” with the best of what fighting games have to offer, said J.C. Smith, director of consumer marketing at The Pokemon Company International.

“Fans will be thrilled to see their favorite Pokemon battle in a whole new way,” he said.

Rated ‘E’ for Everyone

Nintendo’s plans for its next-gen NX gaming console have given some gamers who were slow to adopt the Wii U another reason to hold off on getting one. However, Nintendo keeps making its case for the console.

The company refuses to put an expiration date on the Wii U and has asserted that it won’t begin to offer NX details until next year, suggesting that it hasn’t shifted its focus downfield.

This latest move has the potential to spark interest in the Wii U among consumers who have been getting their Pokemon fix through the 3DS and trading card games.

“Casual-style competitive games” have a solid track record on the Wii U, remarked Joost van Dreunen, CEO of Superdata Research.

“Other titles, like Mario Kart, have done really well and create a unique offering for the platform,” he told TechNewsWorld. “Pokken Tournament is an extension of that success.”

It’s titles like Mario Kart and the brand-new Splatoon that attract such a diverse crowd of players to Nintendo consoles, observed Mike Schramm, head of the qualitative analyst team at EEDAR. Despite the enticing and accessible game play, though, the largest group in Pokken Tournament’s growing fan base likely does not consist of casual Pokemon players.

They’re likely a mix of core fans of the Pokemon franchise and players who like “colorful fighting games” such as Super Smash Bros. and the Marvel vs. Capcom series, Schramm said, noting the game is heavily focused on competitive play.

“In terms of market strategy, the game may be an attempt to bring fans of Super Smash Bros. and titles like it further into the Pokemon fan base, and create another showcase for the franchise in competitive gaming,” he told TechNewsWorld.

It’s been about two decades since Pokemon Red Version and Pokemon Blue Version traded time in Game Boy portable consoles. A lot has changed since The Pokemon Company launched those first two Pocket Monster games, but for the most part, re-creations of the series have been faithful to the franchise, said EEDAR’s Schramm.

There’s a ton of reasons gamers are playing Pokemon games two decades later, according to van Druenen. For one, The Pokemon company long has supported multiple platforms and cross-platform experiences.

The Pokemon franchise and its related lore also have been bolstered by a strong retail presence, animated TV shows and 17 full-length films — and that’s without taking into account merchandising efforts, he said.

“The ability to reimagine the Pokemon universe and its characters across a variety of different game styles has also proven key to its enduring success,” observed van Druenen.

The Pokemon Company and its partners have made a number of wise decisions in their efforts to re-imagine the Pokemon universe across genres and platforms, said Schramm. Some of those moves simply entail staying current: bringing the franchise to new hardware and getting rid of hardware — namely link cables — to facilitate online trading and battling between Pokemon players.

The Pokemon “franchise also offers a ton of depth and complexity, and boasts a very solid competitive following,” noted Schramm. “The accessible game play, combined with the impressive depth of strategy and progression, means the franchise can appeal to a wide audience in a very compelling way.”