Xbox Gamers Will Give a Damn About This ‘Scarlett’ 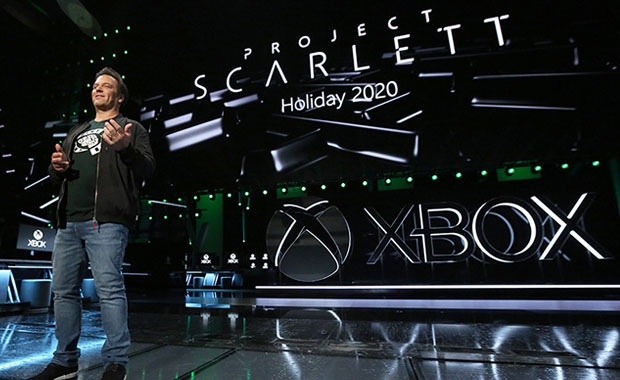 Microsoft whetted the appetite of power-hungry Xbox gamers at its E3 preview in Los Angeles on Sunday, with new details about its next-generation gaming console code-named “Project Scarlett.”

Expected to arrive in time for the 2020 holiday season, the new Xbox will have a custom-designed AMD processor based on the latest Zen 2 and Radeon RDNA technology, Xbox Head Phil Spencer told the E3 crowd.

Along with that processor — which will make the new console four times more powerful than the Xbox One X — Scarlett will have high-bandwidth GDDR6 memory and a next-generation solid state drive for faster I/O, according to Microsoft.

The next-gen SSD in Scarlett will deliver 40 times better performance than current drives, the company said.

Project Scarlett will provide a new level of fidelity, precision and accuracy never before seen in console gaming, Microsoft said.

“Unlike Google with Stadia, Microsoft is not backing off Big Iron,” he told TechNewsWorld.

“It’s not unusual for companies to frame their latest generation of a long-running product as the biggest leap that’s ever been made, but from what Microsoft has shown of the graphics for games like Simulator, they are very impressive,” said Ross Rubin, principal analyst at Reticle Research, a consumer technology advisory firm in New York City.

“In some cases, they’re difficult to distinguish from real-life photography and video,” he told TechNewsWorld.

Scarlett shows that Microsoft is more focused on gaming now than it was when it originally launched Xbox. Scarlett is “a complete turnaround from Xbox One,” Rubin said.

Xbox One “emphasized television and [turned] the Xbox into a device to control your TV entertainment experience,” he observed.

“Over the course of the current generation’s lifecycle Microsoft has fully demonstrated it has learned from its near-disastrous Xbox One pre-launch hype — where it pushed the console as a media hub — by continuing to put gaming front and center of its consoles,” said Michael Inouye, principal analyst at ABI Research, a technology advisory company headquartered in Oyster Bay, New York.

“The industry-at-large views cloud gaming as an eventual destination, but the launch of new consoles by Sony and Microsoft are strong evidence this transition will take time,” he told TechNewsWorld.

Both consoles have more similarities than differences, Inouye added. “Both consoles are using custom-designed AMD hardware, based on AMD’s Navi and Zen 2 architecture. In addition both consoles are switching to SSDs and will reportedly use GDDR6 RAM. While there might be some difference in performance, the consoles will undoubtedly be far more similar than not. “

“These systems will be a massive step forward for gaming,” said Lewis Ward, research director for gaming at IDC, a market research company in Framingham, Massachusetts.

“They’re going to be potent new systems when they arrive during the next holiday season,” he told TechNewsWorld.

The new consoles will offer gamers more immersion with higher resolution, and powerful GPUs with raytracing, which has a great visual impact on games, Lewis added.

“With raytracing, the lighting in the game looks more natural. That creates a better sense of realism and environment, because it approaches the way the real world deals with light,” he explained.

“Raytracing is an incredible resource-intensive and computational complex process, so only the very highest end GPUs can do it,” Lewis pointed out.

Despite the similarities in the hardware, Microsoft may have a slight edge when Scarlett hits the shelves.

“Microsoft’s exposure at E3 and the announcement that Halo Infinite will be a launch title will have positioned [Scarlett] strongly, especially with the U.S. audience,” wrote Piers Harding-Rolls, director at IHS Markit, a research, analysis and advisory firm headquartered in London, in research notes on the event.

Sony’s decision to skip E3 this year gave Microsoft an opportunity to boast about upcoming third-party games for its hardware, as well as crow about a healthy crop of exclusive titles created by its array of studios.

“The large collection of games shown will have reflected well on the Xbox brand and has given it an opportunity to build momentum in the second half of 2019 and into 2020 for the launch of its next-generation console,” Harding-Rolls wrote.

“It’s a big feather in Microsoft’s cap that they’ve built thousands of titles,” noted Moor’s Vena. “The library of Xbox titles is huge compared to something like Google’s Stadia.”

It was apparent from Microsoft’s E3 presentation that the building blocks for its Xbox expansion were slotting into place, observed Harding-Rolls.

Those blocks include services like Xbox Live, Xbox Game Pass and Project xCloud, supported by its Azure cloud business.

“These are important as they are the building blocks of Microsoft’s strategy to radically expand its Xbox audience,” Harding-Rolls wrote. “Microsoft’s Project xCloud has taken on more significance following Google’s Stadia announcement and its early E3 Google Stadia briefing. Less details about the service were forthcoming than perhaps expected, calling the idea that it will launch in 2019 into question.”

Future in the Cloud

During its E3 presentation Microsoft confirmed that when project xCloud previews in October it will support console streaming, allowing Xbox One owners to stream content to other devices.

With console streaming, gamers will have access to their Xbox One game library and Xbox Game Pass titles on the go, streamed directly from an Xbox One console to a mobile device.

“This is the equivalent of Sony’s Remote Play solution, which has been recently extended onto iOS devices,” Harding-Rolls explained. “It is expected that Microsoft’s console streaming will support Android devices.”

As far as the long view for gaming goes, ABI’s Inouye predicted usage models will remain the same for at least the next three to five years.

“Consoles and gaming PCs will coexist with cloud gaming for some time. Many households do not have adequate data services to support cloud gaming, especially at the high end,” he said.

“If we peek further into the time horizon, then the future is definitely looking like it will reside in the cloud,” Inouye added, “but it’s still possible we will see some form of console launching after this next crop of solutions.”