To Mars, Europa and Beyond – Budget Permitting

The U.S. National Research Council (NRC) is recommending planetary science missions for the decade 2013-2022 that could provide important new clues about our solar system. 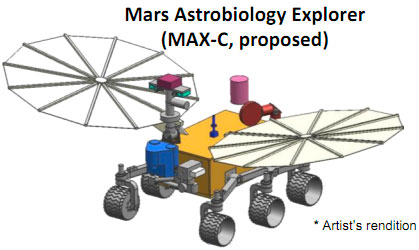 “Our recommendations are science-driven, and they offer a balanced mix of missions — large, medium and small — that have the potential to greatly expand our knowledge of the solar system,” said Steven W. Squyres, Cornell University professor of astronomy and chair of the committee that wrote the report. “However, in these tough economic times, some difficult choices may have to be made. With that in mind, our priority missions were carefully selected based on their potential to yield the most scientific benefit per dollar spent.”

Astrobiology is all the rage these days, as evidenced by the controversial fanfare that greeted Monday’s announcement of bacterial fossils purportedly from outer space that may have hitched a ride on an Earthbound meteor.

Likewise, “the NRC report’s top recommendations focus on the popular theme of ‘searching for life beyond Earth,’ by endorsing big missions to Mars and to Jupiter’s moon Europa, which likely harbors an ocean beneath its icy surface,” University of Toronto astronomy and astrophysics professor Ray Jayawardhana told TechNewsWorld.

NASA’s highest-priority large mission, the NRC recommends, should be the Mars Astrobiology Explorer Cacher (MAX-C), a Mars mission to help determine whether the planet ever supported life.

“This mission will be the first step in a multipart effort to eventually return samples from the planet,” NRC spokesperson Molly Galvin told TechNewsWorld. NASA and the European Space Agency would run the mission jointly, but only if it comes in some US$1 billion less than current cost estimates.

A mission to Jupiter’s moon Europa and its ocean below a frozen surface — considered a promising nearby environment for life — should be the second priority for NASA’s large-scale planetary science missions, the report claims. But again, “the committee concluded that unless costs could be brought down,” conducting that mission “would preclude too many other important missions,” Galvin explained.

An orbiter and probe to the planet Uranus that would investigate that planet’s structure and atmosphere is listed as a third priority in the report. Assessed at $2.7 billion, it too is under the budget microscope.

“The Uranus mission will give us our first in-depth look at an ice giant planet,” said Jayawardhana, author of the new book Strange New Worlds:The Search for Alien Planets and Life beyond Our Solar System. “As someone interested in extra-solar planets, I find a such a mission especially interesting and timely, because we are finding that ice giant planets are quite common around other stars. It is important for us to understand the nearest example of that class of worlds.”

NRC recommendations for medium and small missions are less specific, and seem to come with fewer strings.

Based on competitive peer review, NASA should select several missions for its New Frontiers program, which explores the solar system with frequent launches of mid-size spacecraft, NRC recommends.