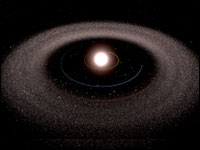 Of all the space objects humans have come across so far, asteroids are surely among the more anxiety-producing examples, thanks to their recurring habit of barreling past our planet at terrifying speeds and uncomfortably close proximity. 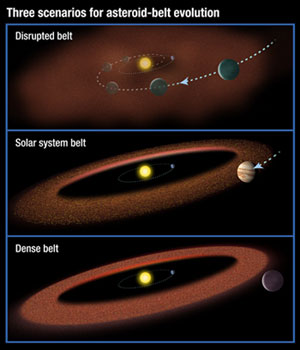 However, it just may be that asteroids are our friends, a new paper suggests.

Specifically, asteroids may be a key to jump-starting the birth and evolution of complex life on rocky planets like Earth, according to a study by Rebecca Martin, a NASA Sagan Fellow from the University of Colorado, and astronomer Mario Livio of the Space Telescope Science Institute.

For that reason, they may be a key to the search for life on other planets.

‘The Potential for Life’

The astronomers’ findings are based on an analysis of theoretical models and archival observations of extrasolar Jupiter-sized planets and debris disks around young stars. Their paper was published recently by the Oxford University Press in its “Monthly Notices of the Royal Astronomical Society: Letters.”

“Our study shows that only a tiny fraction of planetary systems observed to date seem to have giant planets in the right location to produce an asteroid belt of the appropriate size, offering the potential for life on a nearby rocky planet,” said Martin, the study’s lead author. “Our solar system may be rather special.”

Asteroids may have delivered water and organic compounds to the early Earth, the paper notes. Moreover, occasional asteroid impacts may accelerate the rate of biological evolution by disrupting a planet’s environment to the point when species must try new strategies for adapting.

The asteroid belt in our solar system, located between Mars and Jupiter, is a region of millions of space rocks. It sits near the “snow line,” which marks the border of a cold region where material such as ice is far enough from the Sun to remain intact. When our solar system was forming, the region just beyond the snow line contained a dense mix of ice, rock and metals that provided enough material to build giant planets like Jupiter.

When Jupiter formed just beyond the snow line, its strong gravity prevented nearby material inside its orbit from coalescing and building planets. Instead, that material collided and broke apart, ultimately settling into an asteroid belt around the Sun.

“We make the important prediction that if a planetary system has an asteroid belt at all,this belt should roughly coincide with the snow line, beyond which water [condenses] to form ice,” Livio told TechNewsWorld.

“In terms of the search for extraterrestrial life, we note that those planetary systems which have a giant planet just outside their asteroid belt may be more likely to develop complex life on their Earth-like planets,” Livio added. “Among the planetary systems discovered so far, about 4 percent satisfy this condition. I would recommend targeting those first.”

The new study is “both very interesting and highly provocative,” William Newman, a professor in UCLA’s departments of earth and space sciences, physics and astronomy, and mathematics, told TechNewsWorld.

At the same time, “I always worry when I see the word ‘special’ applied to the origin and evolution of the Earth,” Newman added. “For our planet, we need also consider the role of outer solar system objects, notably comets.”

In fact, there is a substantial body of isotopic evidence supporting the view that the Cretaceous-Tertiary (K/T) extinction event about 65 million years ago was “due to a comet, not an asteroid, and our oceans’ isotopic abundances are consistent with the volatiles present in comets,” he explained.

So, “I expect that the mechanism that they present is very important, but one should not exclude the significance of materials originating beyond that Jovian planet in this coevolution of extrasolar planetary system dynamics and life emerging on planets within their respective habitable zones,” Newman concluded.

In terms of our search for an Earth-like planet, meanwhile, the vast distances involved may limit the practical usefulness of this discovery, Paul Czysz, aprofessor emeritus of aerospace engineering with St. Louis University, told TechNewsWorld.

“We’re looking too close for an Earth-like planet,” Czysz explained.

“The galaxy is 100,000 light years across, but the most we’re looking is five to 10 light years,” he noted. “If you were sitting in New York City on Times Square, that would be like looking not quite to lower Manhattan. There’s all that other land out there that you can’t see.”

To find something equivalent to our solar system, “you’re going to have to look a lot farther away,” he said.