Luke Skywalker’s fictional home planet Tatooine in the Star Wars films was perhaps most memorable for its two suns, but astronomers working on NASA’s Kepler mission recently discovered something much like it here in our own galaxy. 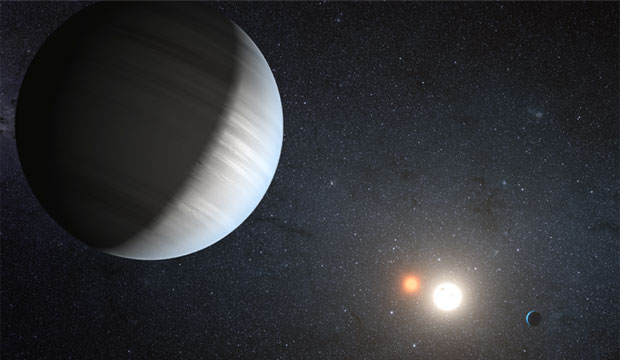 An artist’s conception of the Kepler-47 binary star system

The discovery — announced at a recent International Astronomical Union meeting — actually is double as well, because it includes not just one but two planets orbiting two suns, representing the first sighting of what’s known as a transiting circumbinary multiplanet system.

Called “Kepler-47,” the system is 4,900 light-years from Earth in the constellation Cygnus.

“Until fairly recently, we didn’t know if even a single planet can form around a binary system,” Mario Livio, senior astrophysicist with the Space Telescope Science Institute, told TechNewsWorld. “Now we know that even an entire planetary system can! Since most stars are in binaries, this is very exciting news.”

In the So-Called ‘Habitable Zone’

Included in the Kepler-47 system are two orbiting stars that eclipse each other every 7.5 days from our vantage point on Earth. One star is similar in size to our sun but only 84 percent as bright, while the other is tiny — about a third the size of ours and less than one percent as bright.

“In contrast to a single planet orbiting a single star, the planet in a circumbinary system must transit a ‘moving target,'” explained Jerome Orosz, associate professor of astronomy at San Diego State University and lead author of the paper announcing the discovery earlier this week in the journal Science.

“As a consequence, time intervals between the transits and their durations can vary substantially — sometimes short, other times long,” he added.

Data pointing to the discovery came primarily from NASA’s Kepler space telescope, which measures dips in the brightness of more than 150,000 stars when planets pass in front of them.

‘Those Would Be Interesting Worlds’

The inner of the two planets, Kepler-47b, orbits the pair of stars in less than 50 days and is thought to be a hot planet blanketed in a thick haze resulting from the destruction of methane in its super-heated atmosphere.

Of particular interest, however, is Kepler-47c, the outer planet of the pair whose 303-day orbit places it in the so-called habitable zone, in which liquid water might exist on the surface. Kepler-47c is not considered suitable for life, but it is thought that the gaseous giant could have an atmosphere of thick water-vapor clouds.

“The thing I find most exciting,” said William Welsh, a professor of astronomy at San Diego State and coauthor on the paper, “is the potential for habitability in a circumbinary system. Kepler-47c is not likely to harbor life, but if it had large moons, those would be very interesting worlds.”

‘That Is a Significant Thing’

“The Kepler discovery of Kepler-16 last year showed that indeed there could be close binary stars with circumbinary planets,” SDSU’s Orosz told TechNewsWorld.

Since Kepler-16 was found, there have been three other binary stars with single planets found in the Kepler data: Kepler-34, Kepler-35, and Kepler-38, he pointed out.

Because of the complex nature of the planetary orbits in binary star systems, planets such as these are “less viable candidates for the emergence of life than planets orbiting a single, isolated star,” William Newman, a professor in the departments of earth and space sciences, physics and astronomy, and mathematics at UCLA, told TechNewsWorld.

“I feel that the real importance of this story is that the processes wherein planets form are remarkably robust and do take place in more complex environments than those associated with disks surrounding a single star,” Newman added.

“We should not be surprised if we observe greater numbers of planets in those ‘classical’ single-star environments than we expected,” he suggested. “The processes wherein stars forming in molecular clouds rich in heavier atoms (cf. hydrogen and helium) are good breeding grounds for the formation of planets.”

‘We Need to Look Farther’

Indeed, “as we delve farther into the Milky Way, we are going to find all kinds of different and fascinating things,” Paul Czysz, a professor emeritus of aerospace engineering at St. Louis University, told TechNewsWorld.

“The visible extent of the habitable zone stretches 50,400 light-years to either side of Earth,” he explained. “We probably need to look farther from Earth — perhaps 25,000 light-years and more. If they were closer, their presence would be recognized.”

The bottom line, Czysz concluded, is that “4,000 light-years is interesting from an astronomical viewpoint, but not another Earth-like planet that is inhabited.”