‘Avatar’ Director Pitching In on 3-D Cameras for Mars

“Avatar” director James Cameron is working with NASA on two 3-D cameras that could be used on the next Mars rover, known as “Curiosity.” 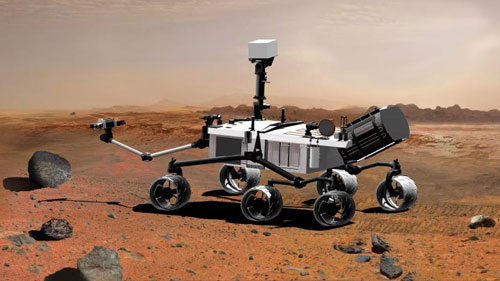 Artist’s concept portraying what the Curiousity rover would look like in Martian terrain.

Earlier this month, Malin Space Science Systems delivered two cameras, known as “MastCams,” that are similar but lack the 3-D capabilities. If the new pair developed with Cameron can be completed in the time remaining before the rover begins final testing early next year, they could be used instead.

The 3-D cameras will both feature zoom lenses. NASA had abandoned its plans for 3-D cameras back in 2007, but Cameron reportedly petitioned the agency to bring them back again.

“Restoring the zoom is not a science issue, although there will be some science benefits,” said Michael Malin, principal investigator on the MastCam project at Malin Space Science.

The non-3-D cameras “will do almost all of the science we originally proposed,” Malin noted, “but they cannot provide a wide field of view with comparable eye stereo.”

With the 3-D cameras, on the other hand, “we’ll be able to take cinematic video sequences in 3-D on the surface of Mars,” he explained. “This will give our public engagement coinvestigator, James Cameron, tools similar to those he used on his recent 3-D motion picture projects.”

Images of the Martian Landscape

Whether or not they end up having 3-D capability, the MastCams will be mounted on the Mars rover’s remote sensing mast, where they can be panned and tilted to provide image coverage around the rover, both nearby and out to the horizon.

The current versions of the MastCams have fixed focal lengths of 34mm and 100mm, respectively, and relatively small fields of view: 15 degrees and 5 degrees. They would be used to build up coverage of the Martian landscape around the rover from a series of small individual images.

The MastCam with the 100mm focal length offers telephoto capabilities, providing the rover with a long-distance reconnoitering capability.

Two other cameras planned for the next Mars mission include the Mars Hand Lens Imager (MAHLI) and the Mars Descent Imager (MARDI).

Mounted at the end of the rover’s robotic arm, the MAHLI will be will be used to acquire very high-resolution color images of the grain structure of individual rocks. The MARDI will obtain color images of the Martian surface during the descent of the rover to the surface, and may be used during rover traverses to acquire millimeter-scale 3-D views of the surface beneath the rover.

NASA’s Mars Science Laboratory mission is in assembly and testing for launch in autumn 2011, with delivery of the Curiosity rover to Mars in summer 2012.

If the 3-D cameras are completed in time, their capabilities would provide “the closest thing we could get to having a man or woman set foot on Mars,” Randa Milliron, CEO and cofounder of Trans Lunar Research and Interorbital Systems, told TechNewsWorld.

“2-D just doesn’t cut it when it comes to examining a new world,” she added.

Ultimately, however, even 3-D is “not enough,” asserted Milliron, whose goal is to set up the first manned Lunar Station on the surface of the Moon. “It’s a nice start, but we shouldn’t stop there. We still need human exploration.”

A ‘Being There’ Experience

In the meantime, however, the cameras could enrich more than just the science, Mario Livio, senior astrophysicist with the Space Telescope Science Institute, told TechNewsWorld.

“With the increasing availability of 3-D movies, TV and other devices, there is no doubt that 3-D pictures will create a more compelling ‘being there’ experience for the general public,” he pointed out. “Hopefully, it will inspire even more interest in the science.”