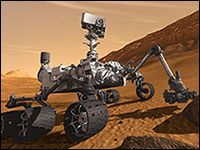 Following the most complex landing ever attempted on Mars, NASA’s most advanced Mars rover to date landed on the Red Planet at 10:32 p.m. PDT on Sunday.

Dubbed “Curiosity,” the one-ton, car-sized rover had been in flight for 36 weeks. Its complicated touchdown — including the final severing of the bridle cords and flyaway maneuver of the rocket backpack — settled the device near the foot of a mountain three miles tall and 96 miles in diameter inside the Red Planet’s Gale Crater.

Now, it begins an investigation expected to last two years focusing on whether the region has ever offered conditions favorable for microbial life.

“The landing followed an unprecedented set of complex maneuvers, and it demonstrated once more how human ingenuity and hard work can overcome incredible difficulties and lead to fabulous results,” Livio pointed out.

In fact, “it is not an accident that the rover was named ‘Curiosity,'” he added. “It may give us an answer to a question that we have been curious about for ages: Did Mars ever host life?

“I sat up all night to follow the approach and landing, and to tweet about it,” Livio said. “It was worth every minute.”

‘Where Does This Gravel Come From?’

Just minutes after its landing, Curiosity returned its first view of Mars: a wide-angle scene of rocky ground near the front of the rover. 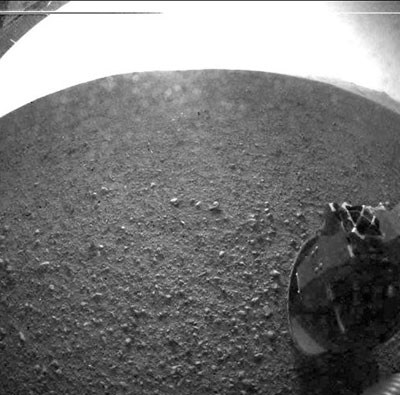 This is one of the first images taken by NASA’s Curiosity rover, which landed on Mars on the morning of Aug. 6, 2012. (Image Credit: NASA/JPL-Caltech)

“In the image, we are looking to the northwest. What you see on the horizon is the rim of Gale Crater. In the foreground, you can see a gravel field. The question is, where does this gravel come from?” Grotzinger asked. “It is the first of what will be many scientific questions to come from our new home on Mars.”

Later in the week, color images are expected when the rover’s mast — equipped with high-resolution cameras — is deployed.

Curiosity carries 10 science instruments with a total mass 15 times that of the science payloads that were carried on the Mars rovers Spirit and Opportunity. As a result, the rover itself had to be built twice as long and five times as heavy as either of those older models.

Some of the instruments included aboard Curiosity, in fact, are the first of their kind on Mars, NASA noted, including a laser-firing instrument for checking the elemental composition of rocks from a distance.

From its landing site in the Gale Crater, the rover sits within driving distance of layers of the crater’s interior mountain. Observations from orbit have identified clay and sulfate minerals in the lower layers, suggesting a potentially wet history.

As part of its mission, Curiosity will use a drill and scoop at the end of its robotic arm to gather soil and powdered samples of rock interiors. Next, it will distribute those samples for analysis among the various instruments it contains.

The mission is managed by the Jet Propulsion Laboratory (JPL) for NASA’s Science Mission Directorate in Washington. The rover was designed, developed and assembled at JPL, which is a division of the California Institute of Technology.

‘The Human Factor Is Still Missing’

“From the rocket engineering point of view, the successful landing on Mars proves once again that storable propellants are the ideal choice for near and deep space missions,” said Randa Milliron, CEO and cofounder of Interorbital Systems, which develops and manufactures orbital launch vehicles and satellites.

“But even with yesterday’s superb technical performance, the human factor is still, sadly, missing,” Milliron told TechNewsWorld. “My thoughts return to the promises that were made to establish a U.S. colony on Mars by the 1980s.

“If the extremely complex rover landing program could be carried out that flawlessly, there is no reason why a man or woman should not have been setting foot on the planet,” she explained.

“All interplanetary missions are welcome and scientifically refreshing — and NASA conducts these magnificently — but a manned mission to Mars and a permanently staffed lunar base are both long overdue,” Milliron concluded. “It is obviously now up to the commercial space industry to perform these tasks.”