Tommy Thompson’s concept of football fandom is derived from his 28 years following the Kansas City Chiefs. He was weaned on scenes from Kansas City’s Arrowhead Stadium, where tens of thousands of people congregate for their own Sunday service, replacing wine and bread with beer and barbeque.

With hair that matches the Chiefs’ bright red uniforms and a drawl that is perfectly Missourah, Thompson is a devout follower. And over the years, watching the Chiefs achieved a ritualistic aura: Sunday meant NFL football, and NFL football meant the Kansas City Chiefs. This was on par with scripture.

But Thompson never wavered. Chinese television didn’t broadcast NFL games, so he hopped on the Internet every Sunday night — which was Sunday morning back in Kansas City — and scoured the Web for places to watch his team.

Without fail, he was able to track down websites that would “stream” — online lingo for “broadcast” — NFL games, including his beloved Chiefs, who usually kicked off around 1 a.m. Jinan time.

With a bevy of sites to choose from, Thompson was left with only one thing to worry about.

“I just remember not knowing if I should drink coffee or alcohol,” Thompson told TechNewsWorld. “You’d do what you had to do to stay awake. Normally I’d want to drink a beer during a game, but in China I usually had to drink coffee.”

Thompson’s weekly forays deep into the night were a testament to his devotion, but also the enormity of the uncharted world of online streaming.

Despite numerous efforts to thwart the practice, sports are streamed from every corner of the Internet, watched all over the world, and enjoyed with every type of beverage.

The Chinese government — with its “Great Firewall of China” — is notoriously uptight about Internet censorship. Yet when it comes to online streaming, it is the U.S. government trying to intervene.

Last November, the Department of Homeland Security, in collaboration with Immigration and Customs Enforcement, or ICE, announced Operation In Our Sites. “In Our Sites” is the press-release-friendly name given to ICE’s effort to find and shut down websites that disregard intellectual property rights, be it the dissemination of goods, TV shows, movies or sports.

Streaming sports wouldn’t be such a big deal but for the gobs of money television stations ante up for exclusive broadcasting rights. For instance, CBS partnered with Turner Sports on a 14-year, US$11 billion deal to broadcast the NCAA basketball tournament, while the National Basketball Association pockets nearly a billion per year from its TV deals.

These numbers pale in comparison to the National Football League. The NFL’s television deals net the league more than $3 billion per year, with four different channels paying anywhere from $600 million to $1.1 billion. Sports giant ESPN pays more than$1 billion a year for the rights to broadcast a single game each week, and that deal will likely inch closer to $2 billion when the current one expires. 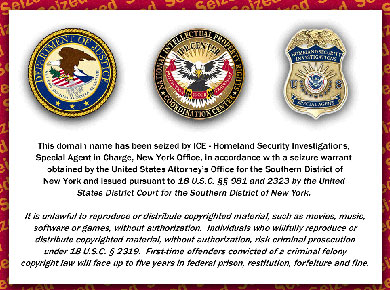 It probably wasn’t a coincidence, therefore, that U.S. authorities seized a slew of online streaming sites the week of the 2011 Super Bowl. Before the Big Game, some of the most trafficked streaming sites on the Web were suddenly adorned with a daunting banner — replete with eagles, the American flag and the seal of the Department of Homeland Security — that declared: This domain has been seized.

Alas, nearly all of the sites reappeared — in time for the Super Bowl, no less. For example, atdhe.net, which had long been a hotbed for sports streams, was reincarnated as atdhe.ws; ilemi.com morphed into ilemi.me.

The same thing happened all over Web — “.net” became “.ws,” “.com” became “.eu,” and so on. It was as though the sites had evolutionary instincts. They survived.

Ernesto Van der Sar, who founded the file-sharing news website Torrent Freak, told TechNewsWorld that the Super Bowl seizures typified the futility that has, to this point, defined the quest to stop online sports streaming.

“I think the idea of the U.S. government was to shut it down, but it was just a minor dent,” said Van der Sar, who lives in the Netherlands. “It’s like they took someone’s telephone number, but the phone is still there. If you get a new number, you can still use the phone.”

This interplay between sports fans, customs authorities and online technology is unprecedented. The money tied up in sports has reached astronomical levels, while skirting the networks paying that money has become a cinch.

The value of the product has had an inverse relationship to the owners’ ability to control it, raising a multitude of questions. The only thing that seems certain anymore is that people like Thompson will be turning to the Internet — and, if they have to, the coffee pot — to get their sports.