NASA’s MESSENGER spacecraft on Tuesday and Wednesday captured and delivered to Earth the first photographs of Mercury ever taken from within the planet’s orbit. 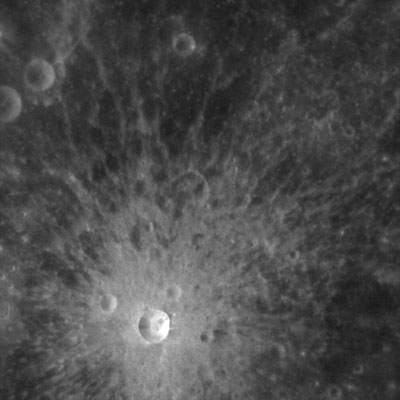 The crater near the bottom of this image is a beautiful example of a relatively small, simple, fresh impact feature on Mercury. (Credit: NASA/Johns Hopkins University Applied Physics Laboratory/Carnegie Institution of Washington)

Taken at 5:20 am EDT Tuesday, the historic first photo was soon joined by 364 more of the solar system’s innermost planet, and several of them were released on Wednesday. Photos were taken by MESSENGER’s Mercury Dual Imaging System as the spacecraft sailed high above the planet’s south pole, providing a glimpse of portions of Mercury’s surface that had not previously been seen by humans.

“The entire MESSENGER team is thrilled that spacecraft and instrument checkout has been proceeding according to plan,” said MESSENGER Principal Investigator Sean Solomon of the Carnegie Institution of Washington.

“The first images from orbit and the first measurements from MESSENGER’s other payload instruments are only the opening trickle of the flood of new information that we can expect over the coming year,” Solomon added. “The orbital exploration of the solar system’s innermost planet has begun.”

NASA’s MESSENGER — short for “MErcury Surface, Space ENvironment, GEochemistry, and Ranging” — on March 17 became the first spacecraft ever to enter Mercury’s orbit after completing more than a dozen laps within the inner solar system over the past 6.6 years.

The probe will continue to orbit the planet once every 12 hours for the duration of its primary mission. On April 4, the yearlong science phase of the mission will begin, and the first orbital science data from Mercury will be returned.

In the meantime, thousands more images will be captured and studied in order to better understand the planet. 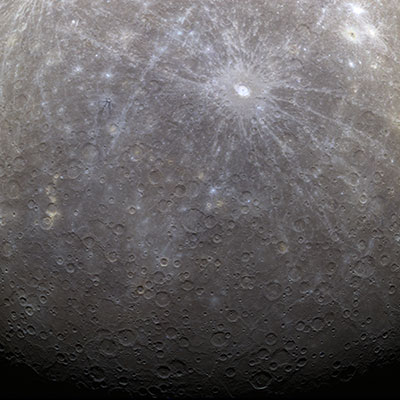 In addition to the first image taken on Tuesday, a series of several more were released on Wednesday, including a color version of that first photo. Visible in the upper portion of the historic image is a rayed crater known as Debussy. The smaller crater Matabei is visible to the west of Debussy and is notable for its unusual dark rays.

The bottom portion of the image is near Mercury’s south pole and includes a region of Mercury’s surface not previously seen by spacecraft. That newly imaged terrain can be seen by comparing the new image with the planned image footprint.

Mercury’s diameter is 3,030 miles. Simulated views on the MESSENGER website provide a glimpse of the spacecraft’s current position.

One of 4 Rocky Planets

‘They’ve had pictures of Mercury before, but this is the first time they’ve gone completely around the planet,” Paul Czysz, professor emeritus of aerospace engineering at St. Louis University, told TechNewsWorld.

Mercury is of interest to scientists because it is one of only four rocky planets identified so far in our solar system. Joining it on that list is also Earth, of course, as well as Venus and Mars.

Among those planets, Mercury is the smallest, the densest (after correcting for self-compression), the one with the oldest surface, the one with the largest daily variations in surface temperature, and the least explored. So, developing a better understanding of Mercury is a key to understanding how the planets in our solar system formed and evolved. [*Editor’s Note – March 30, 2011]

‘One Side Is Blasted Bare’

Making Mercury particularly interesting is its proximity to the sun, and the fact that one side of the planet faces the sun most of the time, Czysz noted.

“One side is blasted bare” by the sun, while “the other side is dark and cold,” he explained. “It takes years for it to do a complete revolution.”

In fact, the extremely high temperatures on the sun-facing side of the planet meant that MESSENGER had to be designed carefully to be able to withstand such heat, Czysz noted. “They’ve designed the craft so a lot of the sensitive stuff is shielded behind, in the shadow of the sun.”

Whereas the Juno probe slated to visit Jupiter later this year had to be designed to withstand that planet’s nuclear radiation, MESSENGER’s challenge was radiation of the thermal kind, he pointed out.

Looking for a Magnetic Core 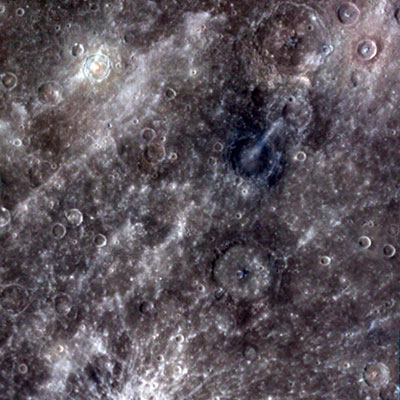 MESSENGER’s wide-angle camera (WAC) is not a typical color camera. It can image in 11 colors, ranging from 430 to 1020 nm wavelength (visible through near-infrared). (Credit: NASA/Johns Hopkins University Applied Physics Laboratory/Carnegie Institution of Washington)

Insights that could be gained from a deeper understanding of Mercury include a better idea of the solar system’s origins, Czysz said.

Our current understanding is that Earth is distinct among the solar system’s four rocky planets in that it has a significant magnetic field, resulting from its molten nuclear core. Though neither Mars nor Venus has anything comparable today, there is evidence that suggests Mars may have had something similar at one time, he added.

Mercury, then, could be our last chance to find another rocky planet with at least the vestiges of a magnetic core like Earth’s, Czysz explained.

“The only reason we have an atmosphere and don’t die is because of our magnetic field,” he pointed out. That’s because the magnetic field is what deflects the solar winds and radiation that are constantly trying to bombard our planet.

‘The Largest Nuclear Reactor Ever Conceived’

“We’re trying to put the pieces together as to why some rocky planets have magnetic fields, or nuclear cores, and why some don’t,” Czysz noted.

Such information is particularly timely in the wake of the nuclear disaster currently facing Japan, Czysz added.

“We’re all afraid of what happened in Japan,” he pointed out.

In fact, Czysz said, “we’re sitting on the largest nuclear reactor ever conceived — it’s called the core of the Earth.”

*ECT News Network editor’s note – March 30, 2011: Our original publication of this article stated that Mercury was the densest of the four rocky planets without including the necessary qualifier “after correcting for self-compression.”
Get Permission to License or Reproduce this Article