Printer giant HP has announced a new line of printers that will ship equipped with a suite of services allowing their owners to print to them from anywhere on the Web, using any device capable of sending an email. The line starts at US$99 and the Web-based service will be supported by digital print advertising. 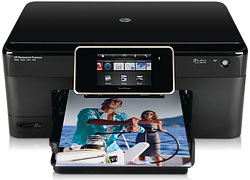 Every HP ePrint printer in the line, said the company, will have a unique email address to which users can direct items for printing. Users also can send documents to print through an HP ePrint mobile app on their smartphone device to a home, office, or public print location such as a hotel or FedEx Office store. Supported file formats include Microsoft Office, PDF and JPEG.

The question, though, is whether smartphone and tablet users are clamoring to be able to print from their gadgets. Not so much, according to Josh Martin, senior analyst with Strategy Analytics.

“We live in a digital age,” Martin told TechNewsWorld, “and this is an analog solution.”

Customers who buy one of the new e-Print-capable printers will be able to access their Google suite of applications, such as Google Docs, Photos and Calendar, directly from their printers, according to HP. Documents and photos can be sent to print from iPhones and other smartphones and, perhaps most interestingly, the iPad, which has no native print support.

Content partners announced along with the printers include Crayola, DocStoc, Facebook, msnbc.com, Picasa Web Albums, Reuters, and Yahoo. Each will provide Web-based print applications. It’s a heavy-hitting group, to be sure.

A service called “Scheduled Delivery” will allow customers to choose content to be pushed to a printer at a designated time each day or week, said HP. News is one example the company gave.

In a pitch to parents, the company also noted that customers might “choose fun kids’ activities from Disney to be ready when the children get home from school.

However, the most successful category of applications in the mobile space to date have been entertainment and gaming, noted Martin. “These applications, which generally dominate the top-ten lists on iPhone, are not generally in need of printing,” he explained.

Like users of free Web services such as Pandora before them, the buyers of HP’s new printers may be surprised to find coupons and ads on the materials they print through the ePrint tools. HP has positioned the information to be provided by print advertisers as “premium content” and stressed that “brands can add value to their audience by populating select print content with customized messages.”

In translation, though, this means that — like a My Yahoo homepage or Flickr album — the service will be supported by ads pushed to consumers. Many, like those who just want to print their Grocery IQ lists easily or send a photograph received on a netbook to a high-quality printer quickly, likely won’t mind the intrusion.

“Having the ability for a printer to print from a mobile device could be a useful feature in differentiating one product from another,” posited Martin.

While the ePrint service may be a welcome addition, then, to an already strong line of personal printers, it’s “a good feature, but not the makings of a successful standalone product,” predicted Martin.

Currently, HP supports such printing from Symbian, Windows Mobile, and iPhone/iPad/iPod touch devices. The Snapfish by HP mobile app for Android is expected to launch this summer.