Hubble Marks 20 Years With Spectacular Shot of Stars Being Born 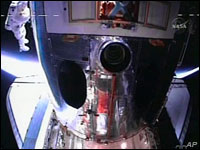 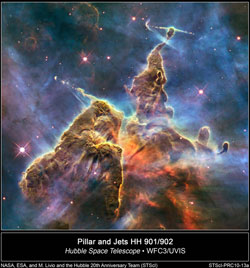 This brand new Hubble photo is of a small portion of one of the largest seen star-birth regions in the galaxy, the Carina Nebula. Towers of cool hydrogen laced with dust rise from the wall of the nebula.
(click image to enlarge)

To celebrate the milestone, NASA, the European Space Agency (ESA) and the Space Telescope Science Institute (STScI) released on Thursday a stunning new photo taken by the telescope, as well as a raft of online educational activities, including an opportunity for astronomy enthusiasts to send in their own personal greetings to Hubble for posterity.

“Hubble is undoubtedly one of the most recognized and successful scientific projects in history,” said Ed Weiler, associate administrator for the Science Mission Directorate at NASA. “Last year’s space shuttle servicing mission left the observatory operating at peak capacity, giving it a new beginning for scientific achievements that impact our society.”

Over the years, Hubble has suffered broken equipment, problems with its primary mirror, and the cancellation of a planned shuttle servicing mission. Thanks to Hubble scientists, engineers and NASA astronauts, however, the observatory has managed to thrive.

The latest photo, for example, captures a small portion of Carina Nebula, one of the largest known star birthplaces in the galaxy. The image shows the top of a three-light-year-tall pillar of gas and dust that is being eaten away by the brilliant light from nearby bright stars.

The pillar is being pushed apart from within, as infant stars buried inside it fire off jets of gas that can be seen streaming from towering peaks like arrows sailing through the air.

The scene is reminiscent of Hubble’s classic “Pillars of Creation” photo from 1995.

“We chose this image so that it will be somewhat reminiscent of the iconic image of the Eagle Nebula, or ‘Pillars of Creation,’ but at the same time will highlight Hubble’s new capabilities,” Mario Livio, a senior astrophysicist with the Space Telescope Science Institute, told TechNewsWorld.

“The image shows the richness of star-forming regions, where gas and dust intermix and young stars emit powerful jets,” he explained. “The entire region is sculpted by the intense radiation and stellar winds of nearby luminous stars.

“The less dense parts of the gas and dust are eroded away, and only the densest columns remain, pointing towards those sources of radiation,” he added.

To date, Hubble has observed more than 30,000 celestial targets and amassed more than a half-million pictures in its archive. The last astronaut servicing mission to Hubble in May 2009 made the telescope 100 times more powerful than when it was launched.

On the telescope’s main site, meanwhile, enthusiasts can send Messages to Hubble via email, Facebook or cellphone text message. Those messages will then be stored in the Hubble data archive along with its science data.

An Opportunity for Amateurs

Members of the public also will have an opportunity to become armchair scientists by helping astronomers sort out the thousands of galaxies seen in a Hubble deep field observation.

Specifically, STScI is partnering with the Galaxy Zoo consortium of scientists to launch an Internet-based astronomy project that enlists amateur astronomers to peruse and sort galaxies from Hubble’s deepest view of the universe into their classic shapes: spiral, elliptical and irregular.

Dividing the galaxies into categories will allow astronomers to study how they relate to each other and provide clues that might help scientists understand how they formed.

‘We Are All the Winners’

As it begins its third decade of service, there’s no doubt Hubble has revolutionized nearly every area of current astronomical research, from planetary science to cosmology.

“Hubble’s contribution to astronomy goes far beyond what it alone has been able to see,” James Oberg, a retired rocket scientist who is now an author and full-time media consultant, told TechNewsWorld.

In the 1980s, NASA unleashed a promotional campaign “declaring Hubble the wave of the future in astronomy, making ground-based instruments obsolete,” Oberg recounted. “In large part due to this offensive overreach, telescope builders on Earth — and, more importantly, telescope funders — were energized to outdo the Hubble and make the arrogant NASA flacks eat their words.”

In the subsequent race, however, “we all are the winners,” he added.

‘A Million Miles Beyond the Moon’

Hubble’s space repairs and upgrades “should remind all future spacecraft builders to mount simple grapple fixtures on their vehicles, and leave the door key under the front mat,” Oberg concluded. “This goes especially for the Webb telescope, even though it is being parked a million miles beyond the Moon.

“I suspect we’re going to get astronauts to those regions a lot sooner than widely expected amidst the current strategy wrangling,” he predicted.