IBM’s Watson Takes One Small Step for a Computer “A four-letter word for the iron fitting on the hoof of a horse or a card-dealing box in a casino,” was a US$400 answer host Alex Trebek gave the trio. “What is a shoe?” Watson answered with a question in “Jeopardy’s” famous format. 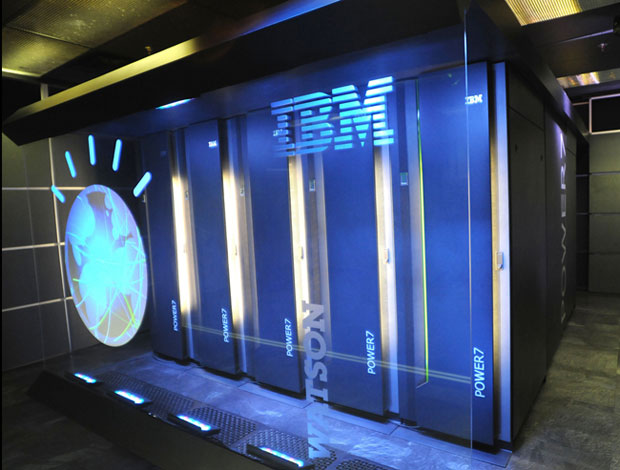 Watson, powered by IBM POWER7, is a work-load optimized system that can answer questions posed in natural language over a nearly unlimited range of knowledge.

On its way to a $5,000 round 1 tie with Rutter, Watson made several mistakes, even repeating a previous wrong question — “What is the 1920s?” — in answer to “the decade Oreo cookies were introduced” (1912 was the actual year).

“No. Ken already said that,” Trebek reminded. It seems like an awfully simple error for such a powerful supercomputer, but the problem doesn’t lie with Watson’s computational capabilities.

“Watson can’t see or hear, so it will go ahead and provide the best possible answer to the question — even if another contestant already offered it,” IBM Research Lab spokesperson Kendra Collins told TechNewsWorld.

Watson didn’t repeat any more Ken Jennings mistakes, leaving the man with “Jeopardy’s” longest-ever winning streak well behind, with only $2,000 for the night. The “Jeopardy” match continues Tuesday and Wednesday with first, second, and third place winners receiving $1 million, $300,000, and $200,000, respectively.

The brainy child of eight universities including the Massachusetts Institute of Technology, University of Southern California, and Carnegie Mellon University — famous for its robotics programs — Watson wasn’t designed to be all fun and games, IBM’s Collins explained.

“We are currently collaborating with a global pool of experts and applied scientists to take Watson’s underlying capabilities even further — into healthcare, financial services and government,” she said.

Imagine a “massively intelligent physician’s assistant” who can out-House Dr. House, “comparing the symptoms of an individual patient with millions of related case histories to suggest accurate diagnoses,” Collins explained.

As a wired Warren Buffett, Watson could answer personal financial questions such as “What should I do with a $50,000 inheritance?” without greed or personal bias. More sophisticated financial risk managers seeking answers to hypothetical scenarios — “What happens if China’s Central Bank raises interest rates by 50 basis points tomorrow?” — could count on Watson to “build an interactive risk-pricing system using a menu of models that evolve over time as the system learns,” Collins said.

Government bureaucrats swimming in laws and regulations can also benefit: Watson could make their jobs more elementary by sorting all the rules and applying them correctly. Want to know which zoning regulations apply to swimming pools or if you have to pay the Alternative Minimum Tax? Watson can answers those common questions with refreshing ease and accuracy, Collins explained.

Like all computers, Watson lacks five qualities that set its human “Jeopardy” opponents apart: It can’t see, hear, touch, taste or feel. Sophisticated as Watson is, “it only processes text; it does not hear the question being read or anything the other contestants say,” like the year Oreos were introduced, explained Simon Fraser University artificial intelligence senior lecturer Toby Donaldson, Ph.D.

Donaldson considers Watson a “good demo” of recent language processing research, but since the computer “doesn’t deal with the very difficult problem of converting spoken language into text, Watson is not a giant leap,” Donaldson told TechNewsWorld. “Understanding real, everyday language is actually a much bigger problem than coming up with the short answers required by ‘Jeopardy.'”

Not to disparage the Big Blue guy, however. “To be good at ‘Jeopardy,’ you need to quickly read and understand questions that might contain word-play or metaphors, quickly retrieve the right answer, and wager smartly,” Donaldson explained. “Getting a computer to do all this is tough stuff, so it was no small effort to build a system like Watson.”