Kubo is a cargo-carrying electric scooter now seeking crowdfunding on Kickstarter that offers potential far beyond the realm of personal transportation.

Ask any e-commerce analyst what the hottest upcoming trend will be in e-commerce circles next year — the Amazons and eBays of this world — and you’re likely to get the same answer: Same-day or even same-hour delivery.

It’s called the “last mile,” and it’s the final snippet of online commerce transformation that’s still to come. We’ve seen the warehouses and websites built, but what we haven’t seen on any significant scale is a great transformation of delivery mechanisms. That part is still old school: van with man, double-parked, dodging parking tickets.

Enter Kubo, a vehicle that could be ideal for this ready-to-be-upgraded role — although oddly enough, the creator, Lit Motors, doesn’t promote it that way.

Essentially, Kubo is a scooter that carries stuff. Basic motorscooters, bicycles, motorbikes and shoe-leather-driven pedestrians, though nimble and urban-friendly, all have one thing lacking, and that is payload capacity. They can’t carry much more than a small parcel or two.

Where the Kubo scooter comes in is with a 300-lb capacity (for cargo and rider) plus a 22 x 22-inch square cargo area with tie-down hooks.

The Kubo has a projected 45 mph top speed from its 3 kW high-torque rear-hub electric motor along with a 50-mile range. Braking at the front is with disc. The unspecified engine will feature regenerative braking, which slows the scooter with kinetic energy.

The also-unspecified-capacity battery will weigh in between 40 and 50 lbs. and will be split into two equal parts.

Among the crucial included add-ons are an on-board smartphone charger port and a small, lockable glove box-like compartment designed for devices and tie-down storage such as extra bungee cords.

The retail price hasn’t been determined.

A pledge of $5,000 gets you an early-bird scooter with San Francisco delivery and product merchandise included. The estimated early-bird shipping date for the Kubo is July 2014. The merchandise is promised for March 2014.

Kubo provides cargo space with a low center of gravity, which has significant advantages over hauling heavy cargo in classic bike panniers or handlebar and rear-mounted cargo boxes.

A fully functional alpha prototype has been built, and the company has experience in building alternative motorcycle-like vehicle prototypes.

We think it’s odd that Lit Motors is pitching its product at the consumer level and using marketing pitches like “a fun way to get around the city.” 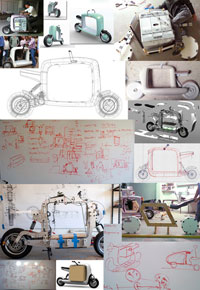 This product is more serious than that, and could conceivably be the answer to e-commerce delivery hindrances such as heavy traffic and limited existing payload solutions.

Although we are seeing interest at the crowdfunding level, we think that Lit Motors isn’t doing itself any favors by only planning to manufacture the scooter if there’s consumer-level interest.

Some countries are heavily dependent on nippy bicycles for delivery. For example, Indian Dabbawalas, who deliver SMS-ordered, cooked lunchtime meals across traffic-snarled cities, may be ready for a technology upgrade. Our advice: Lit Motors, get yourselves over there with this.

Many years ago now, before the days of fax, if you needed to get an important document across town, you’d call a messenger service to bike it over. Fax and then e-mail kiboshed that business.

If we’re ready for a return to urban, same-hour delivery — for merchandise this time, not documents — could Kubo be the answer?