NASA’s Kepler mission on Monday confirmed the discovery of a small planet 600 light-years away from Earth in the “habitable zone” of a star not unlike our own sun.

About 2.4 times the size of Earth, the newly confirmed planet — called “Kepler-22b” — is the smallest yet found to orbit in the middle of the habitable zone, or the region where liquid water could exist on a planet’s surface. 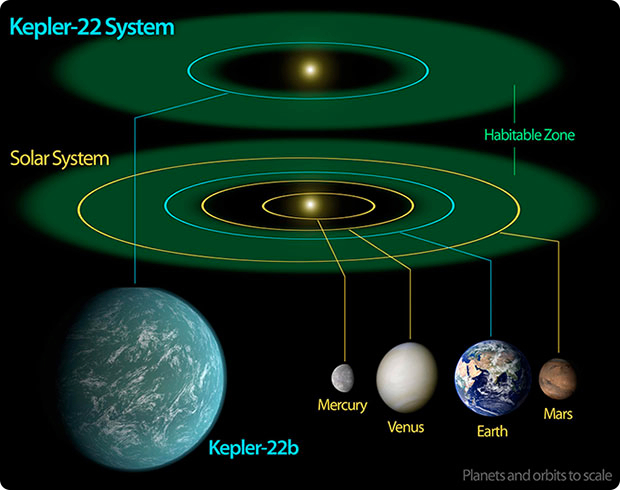 This diagram compares our own solar system to Kepler-22, a star system containing the first “habitable zone” planet discovered by NASA’s Kepler mission. The diagram shows an artist’s rendering of the planet comfortably orbiting within the habitable zone, similar to where Earth circles the sun. Image credit: NASA/Ames/JPL-Caltech

Though scientists don’t yet know if Kepler-22b is primarily rocky, gaseous or liquid in composition, its discovery is a step closer to finding planets similar to Earth.

“This is a major milestone on the road to finding Earth’s twin,” said Douglas Hudgins, Kepler program scientist at NASA.

Of 54 habitable-zone planet candidates reported in Feb. 2011, Kepler-22b is the first to be confirmed. The discovery will be published in The Astrophysical Journal.

While Kepler-22b is larger than Earth, its orbit of 290 days around a sun-like star is much like that of our own world. Though it is smaller and cooler, the planet’s host star also belongs to the same class — dubbed “G-type” — as our sun.

To discover such planets and planet candidates, Kepler measures dips in the brightness of more than 150,000 stars as indications of planets crossing in front of them. At least three such “transits” are required to verify that a signal is a planet.

A variety of instruments are used to review and verify observations made by the Kepler spacecraft, including ground-based telescopes and the Spitzer Space Telescope. Making that task more difficult, Kepler observes a star field in the constellations Cygnus and Lyra that can only be seen from ground-based observatories between spring and early fall.

“Fortune smiled upon us with the detection of this planet,” said William Borucki, Kepler principal investigator at NASA Ames Research Center, who led the team that discovered Kepler-22b.

“The first transit was captured just three days after we declared the spacecraft operationally ready,” Borucki added. “We witnessed the defining third transit over the 2010 holiday season.”

Kepler has also discovered more than 1,000 new planet candidates, nearly doubling its previously known count. Included among those are 10 that are close to Earth’s size and orbit in the habitable zone of their host star, but follow-up observations will be necessary to determine whether they are true planets.

“The discovery that the planet Kepler-22b is in the habitable zone around a sun-like star is a crucial step towards discovering life outside the solar system,” Mario Livio, a senior astrophysicist with the Space Telescope Science Institute, told TechNewsWorld.

Planets discovered by Kepler “are not the easiest targets for follow-up observations because of their distance,” he added. Still, “they provide the important information that these planets do exist, and with time, they will provide us with information about the frequency of such planets.”

Future telescopes, such as the James Webb Space Telescope and its successors, will attempt to identify “biosignatures” in the atmospheres of these planets, Livio noted.

‘We Couldn’t Get There’

The discovery is an interesting one, but even if Kepler-22b does turn out to be habitable, it likely won’t have any practical implications for humans anytime soon, Paul Czysz, a professor emeritus of aerospace engineering at St. Louis University, told TechNewsWorld.

“We couldn’t get there if we had to,” Czysz said.

The star system closest to Earth, Alpha Centauri, is just over four light-years away from Earth, he pointed out, meaning that it would take more than four years to travel there at the speed of light, or 40 years at one-tenth of the speed of light.

We can’t yet even come close to speeds of one-tenth of the speed of light, however, making the prospect of trying to travel the 600 light-years to Kepler-22b completely prohibitive, Czysz said.

Humans also haven’t yet come up with a transmitter than can send a signal that far, Czysz added, making any prospect of trying to send a message in case there’s life on Kepler-22b equally bleak.

“As it stands right now,” he concluded, “we’re isolated.”