Until now, planets known to humans have never wandered into the Milky Way galaxy. However, Friday’s announcement that planet HIP 13044b entered our galaxy hitched to a giant star called HIP 13044 has astronomers rethinking how — and where — planets form.

“This is an exciting discovery,” said Max Planck Institute for Astronomy researcher Rainer Klement, who selected HIP 13044 for the study. “For the first time, astronomers have detected a planetary system of extragalactic origin.”

About 25 percent larger than Jupiter — the largest planet in our solar system — planet HIP 13044b resides about 2,000 light-years from Earth in the southern constellation Fornax. 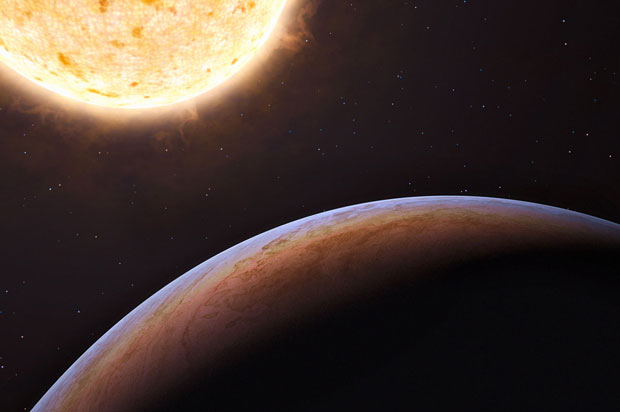 This artist’s impression shows HIP 13044 b, an exoplanet orbiting a star that entered our galaxy, the Milky Way, from another galaxy. Credit: ESO/L. Calcada

Known as an “exoplanet”because it lies outside our solar system, HIP 13044b probably originated in a dwarf galaxy swallowed by the Milky Way six to nine billion years ago, said the discovery’s lead astronomer, Johny Setiawan of MPIA.

“This discovery is unique for three reasons,” Setiawan told TechNewsWorld. “It is the first time that an exoplanet has been found around a star that originated beyond the Milky Way. And unlike our Sun, the planet’s host star HIP 13044 has a very low metal content” — which is contrary to accepted theories of planetary formation.

“Finally, the star has already passed the Red Giant phase,” said Setiawan. “It was not expected that planets survived this violent phase.”

Without actually seeing them through the lens of a telescope, astronomers have detected nearly 500 exoplanets orbiting stars in our galaxy over the past 15 years. Contemporary detection methods are indirect, recording tiny “wobbles” in neighboring stars caused by the planet’s gravitational pull.

Setiawan’s team — which included astronomers from the European Space Agency — coupled a high-resolution spectrograph with a telescope at the La Silla observatory in Chile to detect the star HIP 13044’s wobbles.

“Spectrographic studies of the star’s light can detect these periodic shifts, deduce the star’s motion, and use this information to infer the presence, and some of the properties, of the planet,” Setiawan explained.

HIP 13044b may have been discovered in the nick of intergalactic time. HIP 13044 shows all the signs of ending its life. Once similar to our Sun in its youth, HIP 13044 has already gone through an interstellar rite of old age: the “Red Giant” phase, during which a star cools dramatically — and expands, to hundreds of times its original radius. Astronomers expect our Sun to become a Red Giant in another 5 billion years.

“Red Giants tend to be metal poor, but potentially rich in carbon. Though it’s entirely speculation, it would be very interesting to know if HIP 13044b is a carbon-rich planet,” Speck told TechNewsWorld.

If it is, HIP 13044 may have given birth to its planetary counterpart during the Red Giant phase, not during its earlier, more metal-rich phase. To astronomers, all elements heavier than hydrogen and helium are called “metals.” HIP 13044 contains less than 1 percent as many metals as the Sun — very unusual, according to most accepted models of planet formation, which theorize the higher the star’s metal abundance, the higher the probability it will form a planet.

“Some newer studies have suggested that stars also make planets during a metal-poor, carbon-rich Red Giant phase,” Speck explained. “In a metal-poor environment, stars can still make dust — and dust is what’s important in making planets.”

Now in a quiet phase, HIP 13044 is expected to last a few million more years — a blink of an eye in the life of a star. When it finally expires — in another great expansion or nova-type explosion — it will probably take HIP 13044b with it, providing a hint of things to come for mother Earth.

“We’ve discovered a planetary system that shows us the possible future of our own solar system,” MPIA astronomer Markus Poessel, who was not directly involved in the study, toldTechNewsWorld. “In 5 billion years or so, our Sun will be in the same state HIP 13044 is in now, and will probably have swallowed its inner planets, just as HIP 13044 has.”