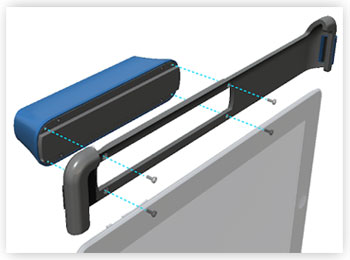 Whereas game add-on Kinect is a sensor for detecting and interpreting movement, new Kickstarter crowdsourced funding project Structure Sensor is for mapping three-dimensional spaces or objects.

Occipital’s Structure Sensor is pitched as the world’s first 3D sensor for mobile devices. The device is designed to be an attached-hardware add-on for mobile devices that allows the user to capture spacial models of indoor areas — 3D models of objects — and perform augmented reality.

The captured 3D models can then be imported into CAD software of the kind used by architects and designers, or to a 3D printer to be replicated.

Tagline: “Capture the World in 3D”.

Kinect and Structure Sensor both work on the same principal — one shared also with golfing and shooting-sports range finders — in that they send out radio signals, like laser, or infrared frequencies that bounce off objects.

The returned signal is then interpreted to calculate gestures in 3D for gaming, map an object — in the case of Structure Sensor — or measure golf-hole distance.

Varying levels of sophistication are employed in the resulting rendering, depending on software, that can include 3D reconstructed images and so on.

Structure Sensor contains a precision infrared emitter, camera and optics that are housed in an anodized aluminum shell. The shell affixes to a bracket designed to clip to the 4th Generation Apple iPad.

Range is from 40 cm to 3.5 m. Some iOS demo apps included in the package consist of an object scanner; room capture; Fetch, which is a virtual pet; and Ball Physics, an augmented reality demo with virtual balls.

An SDK is available.

After launching a Kickstarter project on Sept. 17, Occipital already had more than 2,000 backers a week later pledging more than US$700,000 of a $100,000 goal. So, its funding goal has been achieved. The funding period ends Nov. 1.

Pledge rewards range from a T-shirt for $25 to one of two rewards for a pledge of $349: either a Structure Sensor Hacker Kit including also a USB hacker cable, open drivers and open CAD models, or a kit including everything you need to develop with the iPad. [*Correction – Sept. 30, 2013]

The estimated shipping date is February 2014.

Occipital has been involved in panorama-creation apps and a successful shopping-scanner app, so it’s familiar with the spacial and optical-scanning area. The project creator has said it has already inked agreements with manufacturers and suppliers and is almost ready to start manufacturing a run of beta sensors.

We like the way that the creator has plans to simply redesign the bracket rather than the entire scanner assembly as new mobile devices come to market.

The creator has recently said that the technology is still in development and some planned features haven’t been implemented yet.

We’re concerned about the lack of software or brackets for any Android devices, even though the creator has said it will be producing open-source drivers. We would also like to see more work go into precision measurement because we think that an architect planning a remodel, for example, is going to want the same kind of tolerances as are available in laser measurement.

Pre-beta, and with available demo apps only, this product is at a supremely early product life-cycle stage, but is a potentially exciting product, particularly for software and app developers.

*ECT News Network editor’s note – Sept. 30, 2013: Our original published version of this story mistakenly suggested that both kits were included for a single pledge of $349. We regret the error.