A giant but unseen planet may lurk on the outer edge of our solar system, making its presence known only by disrupting the orbits of nearby celestial objects, according to Rodney Gomes, an astronomer at the National Observatory of Brazil, who presented a paper on the topic earlier this month. 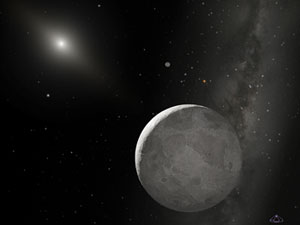 An artist’s concept of the Kuiper Belt Object nicknamed “Xena,” with its moon dubbed “Gabrielle” just above. The sun can be seen in the upper left corner. Credit: NASA, ESA, and A. Schaller – for STScI. (click image to enlarge)

Astronomers have long observed that a group of small, icy bodies in the so-called “scattered disc” region beyond the orbit of Neptune follow strange orbits around the sun, deviating from what we’d expect based on the gravitational pull of the planets we already know to exist.

The dwarf planet Sedna is one example of such a body, following a path around the sun that takes some 11,400 years to complete and doesn’t match what we’d predict.

After years of search for a possible explanation, Gomes may have finally found what’s often been called “Planet X.”

Though it could reportedly be as big as four times the size of Earth, this new, unseen “Planet X” has been elusive so far.

Thought to lie among what are called the “trans-Neptunian objects” beyond Neptune — a group that spans the Kuiper belt, scattered disk and Oort cloud regions and includes what we know as Pluto — Planet X has been sought for centuries as an explanation for what seem to be discrepancies in the orbits of the gas giants.

Indeed, “this goes back over two centuries,” said William Newman, a professor in the departments of earth and space sciences, physics and astronomy, and mathematics at UCLA.

“In fact, Neptune itself was discovered at least in part as an explanation for unexpected orbital behaviors,” Newman told TechNewsWorld, “as was Pluto.”

Revealing Pluto, for instance, was the fact that “the orbits of Uranus and Neptune didn’t seem quite right,” Newman said.

“If you imagine a table with the sun in the middle, the orbits of the eight planets are all basically sitting on the table,” he explained. Next, “imagine a sheet of plywood passing through the sun, but lift it up about 70 degrees; that’s Pluto — it’s almost standing on end.”

Pluto was “not formed in the way our planets were,” Newman added. “It’s an interloper, and was captured by our solar system.”

In 2006, of course, it was decided that Pluto is not actually a planet after all, but rather a dwarf planet and plutoid situated in the Kuiper belt.

In any case, given “this amazing history, people are compelled to look, thinking there is something remarkable” out there to explain the phenomena we’ve observed, Newman noted.

Some, in fact, have even linked such ideas to conspiracy theories and the idea of a planet Nibiru on a collision course with Earth.

Though the results so far look promising, there’s still much peer review and subsequent work to be done, he suggested.

‘We Have to Be More Precise’

“The simulator Gomes used is quite good, but some say we have to be a bit more precise,” Newman explained, noting that it’s still possible at least some of the results are a consequence of inevitable early imprecision.

Such uncertainties, of course, “go away over time,” he added. “Others can explore and confirm or repudiate” the results.

Others in the field, meanwhile, are inclined to reserve judgment.

“From what is in this article, it appears to me that Gomes is trying to explain how the dwarf planet Sedna and other scattered disk objects acquired their highly elliptical orbits,” Scott Austin, an associate professor of astronomy and director of the astronomical facilities at the University of Central Arkansas, told TechNewsWorld.

Interaction with a planet-sized object could be one way for such orbits to occur, but it’s not the only possibility, Austin pointed out.

“An interaction of Pluto with Neptune producing Pluto’s high eccentricity and tilted orbit is the same sort of hypothesis,” he suggested.

Gomes “is trying to explain the present orbits of these objects by a gravitational interaction that occurred a long time ago,” Austin added. “The data does not show that these objects are currently being perturbed gravitationally by some unseen object — nor is he simulating that.”

In short, “this work does not prove the existence of a planet-size object in the outer solar system,” Austin concluded. “It only hints that looking for such an object might be worth the time searching.”

‘I Would Reserve Judgment’

Similarly, “my concern would be about how unique this explanation is, even if it works,” Mario Livio, a senior astrophysicist with the Space Telescope Science Institute, told TechNewsWorld. “In other words, there may be other ways, not fully explored, to explain the deviations.”

At the same time, “I should note that Neptune was predicted to exist based on its perturbations to the orbit of Uranus,” Livio added. “So the explanation could, in principle at least, be correct. But I until I have seen the details, I would reserve judgment.”

If it turns out there really is a massive Planet X in the outer reaches of our solar system, will that change the way we operate today?

‘We’re on the Cusp of a Renaissance’

“Not much, really,” Newman said.

“It simply points out how complex the process of solar system formation really is,” he explained.

Still, over the past few decades the field has been revolutionized, he added, revealing “tremendous diversity that shapes the way we think” about the universe.

“We’re on the cusp of a renaissance in astronomical and planetary discoveries,” Newman concluded, “right at the time we’re basically winding down our space program.”