Astronomers have wondered for centuries about the possibility of Earth-like planets in the neighboring Alpha Centauri star system, but only just recently did their ongoing search bear fruit. Specifically, in an announcement made last week, European astronomers said they have discovered a planet with about the mass of Earth orbiting a star in Alpha Centauri. 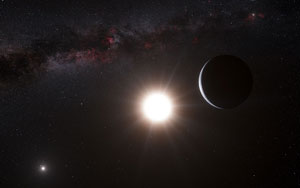 This artist’s impression shows the planet orbiting the star Alpha Centauri B, a member of the triple star system that is the closest to Earth. Alpha Centauri B is the most brilliant object in the sky; the other dazzling object is Alpha Centauri A. Earth’s sun is visible to the upper right. The tiny signal of the planet was found with the HARPS spectrograph on the 3.6-meter telescope at ESO’s La Silla Observatory in Chile. (Credit: ESO/L. Calada/Nick Risinger, skysurvey.org)
(click image to enlarge)

Observations made over more than four years have revealed “a tiny, but real, signal from a planet orbiting Alpha Centauri B every 3.2 days,” explained Xavier Dumusque, a researcher at Geneva Observatory and the Centro de Astrofisica da Universidade do Porto in Portugal. “It’s an extraordinary discovery and it has pushed our technique to the limit!”

Dumusque was lead author on the paper that announced the results in the journal Nature.

‘The Speed of a Baby Crawling’

Alpha Centauri, the stellar system closest to our own, is actually a triple-star system consisting of two stars similar to our sun — Alpha Centauri A and B — along with a more distant and faint red component known as “Proxima Centauri.” Alpha Centauri is one of the brightest stars in the southern skies and lies only slightly more than four light-years away.

The astronomers detected the planet by using the HARPS (High Accuracy Radial velocity Planet Searcher) instrument on the 3.6-meter telescope at the European Southern Observatory’s La Silla Observatory in Chile to observe the tiny wobbles in the motion of Alpha Centauri B created by the gravitational pull of the orbiting planet.

“The effect is minute,” they explained. “It causes the star to move back and forth by no more than 51 centimeters per second (1.8 km/hour), about the speed of a baby crawling. This is the highest precision ever achieved using this method.”

‘Too Hot for Life as We Know It’

Alpha Centauri B is very similar to our Sun but smaller and not as bright. The newly discovered planet, which has a mass slightly greater than that of Earth, orbits about 6 million kilometers away from the star — much closer than Mercury is to our Sun.

For that reason, it is not considered to be within the habitable zone” within which life could potentially exist.

“This is the first planet with a mass similar to Earth ever found around a star like the sun,” said Stphane Udry, also of Geneva Observatory and a co-author on the paper. “Its orbit is very close to its star, and it must be much too hot for life as we know it, but it may well be just one planet in a system of several.”

‘Possibility of a Habitable World’

“There is not a more exciting result for an individual star, even with the long line of spectacular results from the last two decades,” Debra Fischer, a professor of astronomy at Yale University, told TechNewsWorld. “The indication that our nearest neighbor has rocky planets is incredible.”

Furthermore, statistical results from NASA’s Kepler mission suggest that “where there is one, there are usually several rocky planets,” Fischer noted. “This leaves open the possibility of a terrestrial planet in the habitable zone. In fact, I think this strengthens the speculative possibility of a habitable world in the alpha Cen system.”

‘We May Be Able to Send a Probe’

Similarly, “the discovery of a planet in the stellar system that is closest to our Sun is obviously very exciting,” agreed Mario Livio, a senior astrophysicist with the Space Telescope Science Institute.

“Even though this particular planet is in an extremely tight orbit around its host star — and therefore most probably cannot harbor life — we know from many previous Kepler observations that where there is one planet, there is a high probability for the existence of a planetary system,” Livio told TechNewsWorld. “Hence, it is not impossible that Alpha Cen B may even have a planet in the habitable zone.”

The relative proximity of this system to our sun, meanwhile, “also raises the exciting possibility that in the not-too-distant future, we may even be able to send a probe” there, he pointed out. “This is something that would not have even crossed our minds two decades ago.”

The Geneva team “has done something very difficult, but it’s an approach that I’ve advocated for the past few years,” Yale’s Fischer noted. Specifically, “they are digging into their data to remove signals that arise from the surface of the star, leaving behind the whiff of a residual signal — a mere 0.5 m/s — induced by a prospective planet.”

The team is “extremely careful,” Fischer said. “No one wants to be wrong about such a high-profile result. I have no doubt that they have carried out every reasonable test of their data before making this announcement.”

Nevertheless, “because these corrections essentially constitute a new approach, confirmation is critical,” she concluded. “We are in an excellent position to follow up, but that will likely require an intensive search over the prospective orbital period of 3.24d when the star rises again in January 2013.”

‘Near the Detection Limit’

Confirmation is definitely in order, particularly “given that the signal is near the detection limit,” agreed Scott Austin, an associate professor of astronomy and director of the astronomical facilities at the University of Central Arkansas.

“In the meantime, it should be called a possible detection or probable detection of an approximately Earth-mass exoplanet,” he told TechNewsWorld.

In any case, “this result could provide motivation to improve or develop the necessary technology that would make it easier” to detect such exoplanets, Austin said.

As for the odds of there being a neighboring planet in the habitable zone, however, “the calculation of those odds is probably about the same as before the detection, given that it is now becoming safe to assume that a significant fraction of sun-like stars have exoplanets,” he concluded.

‘The Rule and Not the Exception’

Indeed, “the fact that this object is so close and so Earth-like in mass gives it a greater sense of immediacy, at least in the eyes of the general public,” William Newman, a professor in UCLA’s departments of earth and space sciences, physics and astronomy, and mathematics told TechNewsWorld.

At the same time, he said, “we are entering an era where the discovery of increasingly complex extrasolar planetary systems could become the rule and not the exception.”