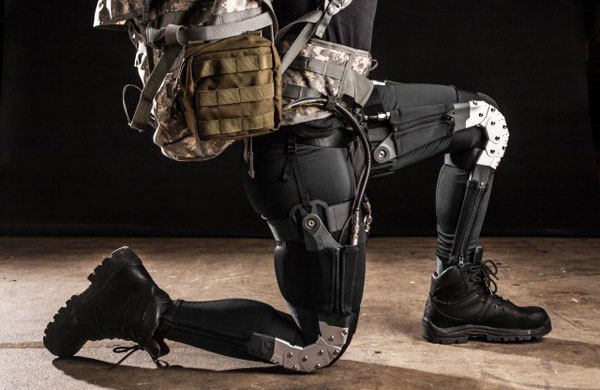 Called the “Soft Exosuit,” the biologically inspired device is made of flexible textiles woven together into a piece of smart clothing that is pulled on like a pair of pants and intended to be worn under a soldier’s regular gear.

The suit mimics the action of the wearer’s leg muscles and tendons when walking and provides small but carefully timed assistance at the joints of the leg without restricting the wearer’s movement.

The Soft Exosuit is being developed by Harvard’s Wyss Institute for Biologically Inspired Engineering through a US$2.9 million contract awarded by DARPA last week as part of its Warrior Web program.

Also collaborating on the project is athletics company New Balance, which will contribute textile and apparel innovation expertise.

With its focus on flexible technologies, the Soft Exosuit aims to avoid many of the challenges encountered by more traditional exoskeleton systems, which tend to be not only heavy but also power-hungry and rigid, thereby restricting the wearer’s motion.

A current prototype of the suit features a series of webbing straps positioned around the lower half of the wearer’s body. Included therein are a low-power microprocessor that acts as the suit’s “brain,” as well as a network of supple strain sensors akin to a nervous system. Thus equipped, the suit continuously monitors suit tension, the wearer’s position and more.

Now, complementing the project’s driving military focus, the Soft Exosuit team also will collaborate with clinical partners to develop a medical version of the suit designed to help improve mobility in users such as stroke patients.

“What’s really notable about this particular technology is how unobtrusive it is,” Charles King, principal analyst with Pund-IT, told TechNewsWorld.

While there have been “a ton of CGI-inspired people in robotic suits” in popular movies, “what I think is really intriguing about this is it’s basically built into clothing,” he said. “It’s more like a robotic assist than a technology that’s meant to replace or replicate human movement on a large scale or in industrial form.”

Some of the most immediate applications of the Soft Exosuit clearly would be in military settings, “where the idea of having a type of robotic assistance that could, say, improve the distance or speed a soldier could walk by 10 or 20 percent or more would be extremely desirable,” King pointed out.

“Similarly, if you could equip soldiers to carry a larger payload without subjecting them to any kind of physical injury or damage, that would be terrific,” he added.

Eventually there could be similar use cases in industrial settings, King suggested, “where an extra edge in lifting capacity or working without getting overly tired would be a real benefit.”

The science makes “perfect sense,” he said. “The engineering design process revolves around the human feedback loop. So, it could reach a useful outcome quickly.”

Essentially, the suit conserves the muscular energy of the wearer, who then can “carry on longer, do more work or do harder work,” he explained.

In fact, “eventually, there could be exosuits for almost any human movement,” Kay predicted — “I imagine sex as well.”