SolePower: Stepping Away From the Grid

If you’ve been reading TechNewsWorld for a while, you’ll know that we show a lot of interest in new ways to power our gadgets — like with solar power, for example.

Well, here’s a charging method that could make a lot of sense. It’s one that isn’t reliant on the sun to convert solar radiation into power; it also isn’t reliant on heavy batteries. Instead, SolePower’s Kickstarter project aims to generate power kinetically with each step you take. 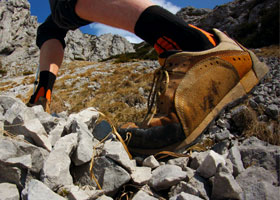 That’s via a shoe insert, specifically, and it uses the same principle as a hand-crank flashlight.

SolePower’s shoe insert includes a waterproof mechanism and slides into one shoe. From there, it captures the energy inherent in each step that foot makes. Essentially, the wearer walks normally and power is produced through kinetic energy.

The power generated is then stored in an included battery, which is strapped to the ankle. When the battery is fully charged from activity, the wearer removes it from the ankle strap and connects it to a normal, 5V USB port on a smartphone or other device.

The smartphone is then powered by the SolePower battery.

To be clear: The insole doesn’t have to be removed from the shoe, but the battery does. The battery is attached through a cable that’s run through the lace eyelet.

A second, dummy insole, meanwhile, matches the power-producing generator insole on the other foot for feel and weight.

What’s in the Package?

Two waterproof, cut-to-fit inserts for womens’ U.S. size 8 and up with an ankle bracelet battery pack or shoelace clip battery pack with micro- or mini-USB ports.

The marketing tagline is “Power by Walking.”

SolePower’s insert captures the force created by the heel when you walk and uses mechanical links and crank-style generators to make the power rather than taking advantage of malleable piezoelectric materials that create power when being bent out of shape.

SolePower reckons piezoelectric technology is too expensive and can’t generate enough power in this application.

Between 2.5 miles and 5 miles of walking generates a full iPhone charge, according to the company. The wearer’s weight limit is 350 lbs.

Pledges start at $3 for a subscription to SolePower’s newsletter. There are 28 of 200 $100 SolePower insole packages with t-shirt and bumper sticker still available.

The estimated shipping plan is December 2014 in the United States only.

SolePower reckons there are more than 6 billion mobile phones in the world, 1.5 billion of them in developing countries.

Possible users, according to the company, include trade show attendees, hikers, natural disaster victims, developing countries and the military.

This is a good-sized market. The company says that its initial target market of outdoor enthusiasts alone is a $7 billion market opportunity.

SolePower may not be asking for enough money. According to its website, its $50,000 goal will not get it through the entire manufacturing and distribution process; this Kickstarter effort is just one part of its funding plan and is focused on testing and prototype purposes, it says.

TechNewsWorld would like to see a direct connection between insole and device — or insole, charge controller and then device — rather than via battery. The battery adds a point of failure, weight and excessive complication. iPhones already have batteries.

One other downside is that the insert will not create power efficiently when running — runners don’t use their heels as much as walkers do. So, that market is not available.