With a much-anticipated NASA announcement Thursday, “The Devil in the Dark” is no longer the name of actor William Shatner’s favorite original “Star Trek” episode, about a man-eating subterranean monster made ofcells based on silicon rather than carbon.

Rather, it’s a newly discovered bacteria called “Strain GFAJ-1” from a common bacterial family, Gammaproteobacteria, that consumes arsenic to grow and reproduce.

And unlike author Michael Crichton’s deadly Andromeda Strain, Strain GFAJ-1 isn’t dangerous and didn’t come from outer space, but from Mother Earth herself — in the dark depths of California’s Mono Lake. 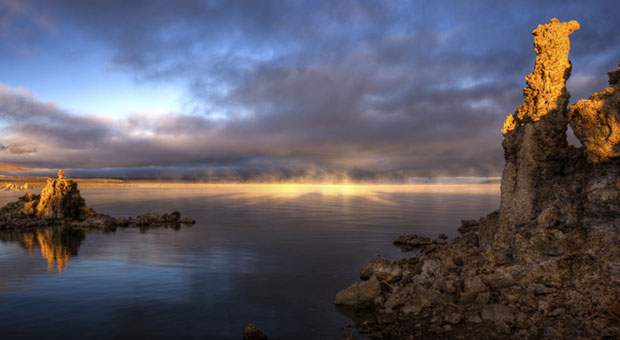 For Team Titan, the research group that made the announcement at a news conference, the discovery portends great things for the field of astrobiology — the study of life’s possibility beyond Earthly shores.

To Mars and beyond, extraterrestrial planetary shores have long been considered hostile to the relatively gentle conditions that gave rise to the carbon-hydrogen-oxygen-nitrogen-sulfur-phosphorus-based life we know at home.

Substituting for phosphorous in Strain GFAJ-1, arsenic — a metallic element poisonous to most terrestrial life — is a strong candidate for an extraterrestrial cellular building block for life in difficult digs. Australian astrobiologist Paul Davies suggested as much in a 2007 Scientific American article, “Are Aliens Among Us?”

“In the search for alternative microbes, some scientists have focused on ecologically isolated niches with harsh conditions that most ordinary organisms could not withstand,” Davies wrote. “These niches include extremely alkaline and salty bodies of water such as Mono Lake in California.”

Phosphorus is a lesser-known but critical component of adenosine triphosphate, or ATP, a basic cellular energy carrier. All cell membranes also contain a mix of fats and phosphorous called “phospholipids.” Arsenic is poisonous precisely because it is so chemically similar to phosphorous. It disrupts metabolic pathways because it can slip in and displace phosphates.

Except, that is, in Strain GFAJ-1, which prompted NASA Astrobiology program director Mary Voytek to open her conference remarks with, “Today’s report is on terrestrial life, but not life as we know it.”

From Lake to Lab

Bacteria and other cells normally use phosphorus — a common fertilizer ingredient — for metabolism. But when NASA research team member Felisa Wolfe-Simon — a U.S. Geological Survey microbiologist — replaced phosphorous with arsenic in the lab, Strain GFAJ-1 continued to grow. In time in fact, arsenic had become a cellular staple. 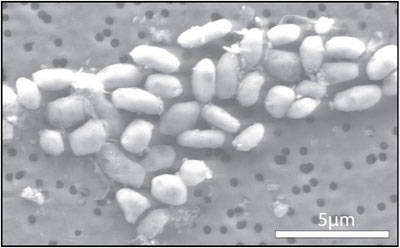 Though the substitution wasn’t complete — Strain GFAJ-1 still needed some phosphorous to grow — the implications for extraterrestrial evolution — a key part of life on Earth — intrigue NASA’s Conrad. “If you can make changes like this in a biomolecule’s basic cellular composition, what do those changes mean for evolution? For organism adaptation?” she asked news conference attendees.

For future NASA missions to planets and planetoids suspected of harboring life — such as Mars, and the moons of Jupiter and Saturn — the discovery is a game changer, said Team Titan member Steven Benner, a molecular biologist.

Past and present missions have sought life that looked like us — similar biomolecular consistency, same life-giving requirements. But a bug that feeds on arsenic is an alien in its own land, and it will force astrobiologists to expand their life-seeking parameters. Heretofore unheard-of experiments that seek the metabolites of arsenic, for instance, may be added to future missions.

“My niece has asked me, ‘how did we get here? Are we alone in the Universe?” Wolfe-Simon said in a personal aside.

Few astrobiologists may be better equipped to answer that question than Grove City College physics and astronomy professor Guillermo Gonzalez, who with University of Washington astronomy professors Donald Brownlee and Peter Ward formulated the concept that gave birth to the relatively new science of astrobiology — the “Galactic Habitable Zone,” that area of a galaxy most likely to support life. [*Correction – Dec. 3, 2010]

The arsenic-for-phosphorous bacterial substitution idea isn’t new, Gonzalez told TechNewsWorld, and whether it can completely substitute for arsenic in bacterial metabolism remains an unanswered question, despite the NASA findings.

“Arsenic has been known to have chemical properties similar to phosphorus for a long time,” said Gonzalez, who also cowrote the textbook Observational Astronomy and a popular astrobiology guide, The Privileged Planet. “Whether it can completely replace phosphorus is a question that will require more research.”

Until that research is completed, and arsenic truly emerges as a tree-of-life type building block, Gonzalez said the findings are “not very important.”

“We still don’t know if arsenic is an essential component for habitable life,” Conrad conceded during the press conference.

But it may be, she added, making talk of new missions to Saturn’s moon Titan (known for traces of arsenic) and retrofitting probes to search for arsenic the next step to new funding — the real reward behind virtually any contemporary scientific breakthrough. Far horizons, after all, seem to lie ahead.

“Remember — this isn’t about arsenic in Mono Lake,” Wolfe-Simon told the conference. “It’s about asking much bigger questions.”